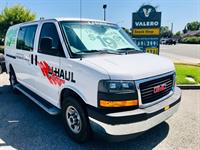 The guy manhandled me. The guy at the counter literally got angry on me when i asked him how do i disengage the parking brake. he grabbed my arm and forced my hand in execuse of showing me the brake disengage lever. When I confronted him and shown my discomfort about his behavior, he cursed me and asked to get out of the VAN and go to some other UHAUL location and he threatened me that he would cancel my booking. Just because I had a deadline and needed the VAN desperately, I did not cancel. I was almost ready to call the cops seeing how angry and furious he was. he literally opened and slammed the driver side door when i was still sitting in the driver chair. If you are not taking any action of the guy, I am going to complain about this to the cops. The fuel indicator was also not operational.

Manager was rude and prejudiced against my arabic background

Communication between U Haul and myself was not good. My location was changed 30 minutes before my appointment, and instead of calling, U Haul emailed me. I was already en route to the Campbell location. After the run around, I ended up at the Sunnyvale location where the man working turned me away at first! He said no reservations for today (incorrect). His companion was eating flaming hot cheetos and sucking his fingers. Extremely unprofessional. I suppose you could improve your hospitality and professionalism for the next customer.

I had not selected SafeMove coverage when I booked online nor did I ask for it in the store. My bill has $14 from the SafeMove. Please remove it.

We dropped off the U-Haul the day after we picked it up in Seattle. The worker/owner was there. 4 days after ,my son got an email saying the U-Haul was not dropped off. My son informed them, we dropped it off. Another email was sent saying they did not have the truck. I had to call and was going to go to the location to see what happened the next day which was suggested by the uhaul person on the phone(the place was closed when I called or I would have gone that very minute). Besides the stress of no record of dropping it off- because the worker/owner said it was fine and we didn't need one-we would need to figure out the problem. today we were sent an email that they did receive the truck and we got a receipt emailed. However, we were charged for 6 days extra!!! We returned the truck 1 day after we picked it up in Seattle. Now I am waiting to get a call from a manager to inform me that I will be reimbursed for the money I was charged. If there was another truck rental, I would go with them. I would like to get a discount on my next rental which will be in 3 weeks. We are moving my son down to LA. please call me with any questions.

The interface for the 24/7 checkout was awful. There's no instructions that you will need to have a physical lease agreement or passport while outside next to the truck. This was a terrible uhaul experience.

The manager, Ed, was great! Easy-going and with a friendly sense of humor.

I uploaded pictures of my ID twice: once at home about an hour before I picked up the truck, and then again once I got to the truck. I'm not sure if I didn't do something correctly, but it would have been nice if I could've done that step just once.

Well ,it was all very good.

U-Haul had not sent the dozen pads I had ordered, the dolly was not in the truck as the instructions had noted. The dolly was being kept safe in the shop. The proprietor was helpful in pointing me to a location that would have the pads for me.

I enjoyed the personality of the older gentleman that helped me however the computer seemed foreign to him. What should've taken 10 minutes took over 30 minutes in between gas station customers .

The personnel was friendly but not all that helpful. He just gave us the key and didn't bother showing us how the truck works, etc. I also did not like how everything, such as the driver's license pictures, had to be done through my phone. If I didn't have a smart phone or it wasn't working, I would not be able to rent the truck. The rental place should have a way to gather that information if I did not have access to a smart phone.

Can't think of a thing. I was so thrilled to see that you now offer movers along with the rental van. As seniors, it sure made our lives a lot easier. Thanks.

The pick up and drop off experience was not satisfactory. The employees were quite rude while picking up and dropping off the uhaul

Best is very easy and simple to use.

This Uhaul location is the absolute WORSE. I rent Uhaul trucks often to my moving misfortunes and NEVER have had a bad experience up until today. I'm not sure if the rules are different due to this spot not being a real Uhaul, (I think they're called â€œNeighborhoods Dealerships â€œ) but this was my first and LAST time at these locations because I have absolutely no trust in them. The gentleman who helped me tried getting over on me about miles and gas and when I asked for confirmation (because that was not what the agreement I signed was saying) he said he was â€œclosedâ€ and couldn't confirm ANYTHING til the morning. Also, I got a confirmation through email saying that I may have the truck for 18 hours, however, the gentleman at the gas station told me I only had 6 hours. He also make you pay for the insurance that you cannot decline. (But you ALWAYS have the option of declining their insurance in a real Uhaul store) Mind you, this is all in a nutshell, I'm sparing details but in short, I learned it's best to just use a regular Uhaul location and not these little â€œNeighborhood Dealershipsâ€ because regular Uhaul locations do not pull these tricks, I have had plenty experience to back that claim up. This gas station Uhaul experience was just a big mess, the gentleman I dealt with was absolutely horrible at handeling issues and he had no concern about what was going on. I would DEFINITELY NOT RECOMMEND this specific location under ANY circumstances whatsoever. Hope this helps.

Ed and his staff was helpful.

We had to wait 20 mins while the attendant was on the phone. The uhaul smelled like people consistently smoke in it. In addition, the car itself sounded like it needed work.

Ed was a pleasure to work with.