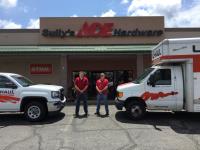 The agent was very helpful

Trailer definitely did it's job, it was really outdated and getting the door open was for real a struggle every time, same issue when closing. Rubber seal is all broke and trailer takes on water.

The service was fine the truck was not. The front end had a clunk over bumps and the steering alignment was way off which made driving the truck more dangerous and difficult. The driver door also leaked a ton of air and the tires shook very bad at speed and was dangerous in the rain because the tires weren't in good shape because of the alignment. Uhaul needs to maintenance their trucks better!

We arrived for an early morning pick-up (0630). The truck had less than the gas started, there were no moving pads which we booked with, and the truck ran rough. When after the store opened we called to say there were no pads, etc, we were placed on a 19-minute hold instead of answering we were told the store was too busy and couldn't answer our concerns. When returning- we were charged for the pads and they were entered on the bill as missing. Very disappointed!

24/7 check in experience sucked. Don't offer it if you can't follow through on your end. Calling references at 5am is ridiculous. Sully's was great to deal with.

The service you get from this location is excellent. I drive passed the UHaul place in St. Clair to use Sully's Ace Hardware because of their service which is 12 miles further.

This location and all of its representatives were amazing! However, the lady that attempted to confirm first reservation from corporate Uhaul was extremely rude and overbearing. She was not from Sullys

Nothing. It was perfect.

The people I dealt with here were very good. The walked me out and went over the truck and made sure I understood everything.

I had to call quite a few times to confirm my vehicle reservation. Each time I called, the associate said the information was different from what I had entered on the website and what I was wanting. It was a confusing process. I did not receive my UHaul contract when I completed the mobile check in and someone had to contact me the next morning to give it to me (I later found out my truck was never 'checked-in' so I got an extra day of use even though I didnt use it). I was told I was going to have to take pictures of the vehicle before picking it up but I was never promoted to in the mobile pickup. I also had clicked pay later because I was closing my bank account in the area and when I dropped the truck off, the associate told me I had already paid online so I was not okay with that. Luckily my bank didnt charge me anything extra. Overall I think communication with the customer needs to be more clear. They're supposed to call you the day before your reservation to confirm and again, when the associate called me, the pickup time was wrong and the check-in process was wrong which are two very important details. I feel this is fault of both Uhaul and the UHaul location I chose. On a positive note, the truck was clean on the inside and ready for use. The equipment I requested originally was in the truck and ready to go. The drop off location was very quick and easy to get through. I was contacted by an unverified number asking if I wanted to tow a trailer to the drop off location for a $50 compensation. I would have accepted it but when I called my pickup location and asked about it, they knew nothing so I didnt want to take it at the risk of it being a scam. So if that was real, I would prefer a phone call and a note out in my reservation so the sales associate can see it too.

Let them know in advance when locations change!!!

Nothing. He was very helpful and the move worked perfectly.

I received prompt and helpfull service

in and out quickly

Nothing..I started this rental process through the St Louis office with April who is there absolute BEST ?? to work with! She in turn connected me with Sully's and I worked with Rob who also was Great! Thanks to you all!!

We will be renting again in a few weeks for our move.

Sally's is a great place to rent uhaul! Quick, easy and priced right!

Friendly and fast and will help No problems

The checkout process took over 30 minutes (12:30-1:08) and they made the return time 12:00 the next day. I was returning that evening, but I still didn't like that. Secondly, they told me to return it at half a tank and it was slightly less than half a tank when I left. I still returned it at half a tank anyway so I wouldn't be charged extra. Then, after having a miserable day moving in the rain and mud, they charged me $25 because I didn't mop the back of the truck out. There weren't big gobs of mud, just foot prints. I don't know who decides that fee should be charged at all, but that is a stupid fee to tack on.