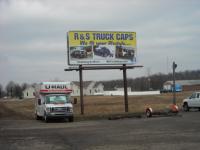 Better communication. I was not made aware of the exact drop off process, and the store put that I rented the truck for three days when it was only one. However, I did get a refund through Uhaul but it was the store who put the wrong info in and I was being charged 100 over what my bill was.

I said no to insurance, got no receipt, Then when I needed contract to return, I had been charged $40 for the insurance. I returned the trailer early and was told of I did I should get some credit for not using it as long. When I called u-haul I was told they couldn't do anything about it!

The man that got my key was great, the man that came in from the shop that said I was going to have to wait as he needed the man who gave me the key. Luckily he finished with me before going to the shop.

R&S came through for us in a jam. Out original pickup place no one was there for us to pickup our rental trailer. We were on a time schedule & thank goodness R & S came through. Things do happen I just wish the other place would've text us & let us know if they were gonna be late. But with not knowing we had to do something.

The folks where very pleasant and helpful.. The truck was in excellent condition and our small move went well.

The odometer had a discrepancy when they visit was picked up. There was an attempt to overcharge me by 400+ dollars. Nothing to do with the drop off facility. Correction was made and all is good.

No boxes or padding materials?!?!? Very Nice and Helpful Staff!!!!

The locations for pick up and drop off were fine, but I was disappointed that Uhaul changed my location for pick up which caused me to drive 30 minutes out of my way. I had scheduled the pickup with the location because of the location I was staying. Also the wiring for the breaks and lights was broken when it was picked up and had to be replaced before we could leave with it. It obviously was not checked at the previous drop off.

The location and people were great. Uhaul over all really needs to get there act together!!! Not at all happy. Do not recommend Uhaul!!!

The guy didn't know what he was doing, took 20 minutes to schedule, went in the next day to pick the trailer up, said it was $49.00 for 2 days, paid cash and he charged a extra $21.00 since I paid cash, said I would get the difference back when I returned the trailer, then another guy checked me out and he said they didn't owe me nothing. The extra charge was for insurance.???????? So if I would've paid by credit or debit card it's $49.00 but since I paid cash it was $70.00 The guys that work at R&S Truck cap does not have a clue. I rented Uhauls from 3 other places in Tuscarawas county and never had a problem and the bill was what they said it was. I got fed up and told them to just keep the extra money after 10 minutes of arguing with this clown. They don't know what they are doing and they are robbing people.

The gas cap would not stay on tightly. The truck needed maintenance. Shook really badly in West Virginia. Over all was satisfied.

Four pin to seven pin electrical adaptor, if needed, should be included in the rental price.

The agents in two out of two trailer rentals that I have made in a month were extremely slow to process me out with the equipment (almost an hour each time). They seem to not understand the computer program. The agent today didn't hook up the trailer without my help and then hooked the chains up wrong. Neither wanted to check the condition of the trailer upon its return...strange since they stress buying insurance. This location needs a U-Haul overhaul regarding the rental process and customer service. They just seem uninterested. Dirty trailers with debris on the floor and six inches of snow on the floor is rediculous. I was overcharged also for my one-day rentals when I only traveled 14 miles from the rental center one one occasion and 20 on the second. $18 per day turned into $26 both times. I got ripped off. Won't go back and won't recommend them.

At this time I don't believe anything.

I was disappointed that the location was not the one I had requested for picking up the truck. I wasn't made aware prior to pick-up that evidently the 20 ft truck was not available in new Philadelphia and I had to go to the north end of Strasburg to get it . This added miles to the 120 allowed and as a result,put me over that allowance. If the pick-up location is changed by the rental company shouldn't they account for the additional mileage and inconvenience? I was surprised that there was a balance on the rental due to this. I understand it's a small amount of money, but it's not the money, it's the principal as the saying goes. Otherwise my trip was decent and uneventful. Sincerely, Scott Riffle

The trailer was great but the price was quoted at 474.00 and it was rented at 672.00 when I pick it up. sounds like a bait and switch type issue. We received no help from your customer service department, my wife got the phone run around. 30% up-charge is ridiculous. That's what social media is for spread the word. If you would like a copy of the quote, I saved it. upset with U-haul.

It seems there is some lack of communication with uhaul and the locations, I reserved for 24 hours and received a call at 11 am the next day saying the trailer was reserved by someone else at that time and waned to know when I would be back. I couldn't get back for 8 more hours.

When I picked up the trailer, it was frozen to the ground. Thank goodness they had somebody who could come out and help me. If I had to have done it myself, it would not have been possible. also, the gentleman that helped me said I needed a connector, so I went in and paid the $13 for one. We discovered that none of the lights on the trailer worked. After getting home, we realized that we did not need the connector. I wasn't real thrilled was spending the extra money that I did not have to. then I was surprised to get a phone call from the receiving location asking me where the trailer was. It was supposed to be a four day rental, but this company messed up and put it as a one day rental.