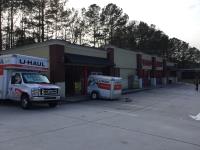 Had to drive 10-15 miles from home location to pickup vehicle.

Unable to discuss your bill. I expressed to the cashier that I do not want insurance and she said no problem but when contract emailed to me it charged me. I call the number on contract and left a message for a call back but did not receive one. I ask cashier to assist me with a walk thru of the truck after returning and she said just take a picture of dash board show miles and gas and send to a 470 number. I will not recommend this store to anyone. You will be frustrated.

The store employees should know more about the process to make it clear to first time customers. Pickup time was one but wasn't able to get the truck until after three at a sub-location. The store could not get the authorization hub to answer the call, otherwise all was good. Late start meant an extra day.

Clean the trucks. Make sure the equipment that we pay for is on the truck.

This was the worst experience with Uhaul I have every had. When picking up the Uhaul I had a 9am reservation but had to wait 30 mins because the clerk didn't know how or have access to the system. Then once we got the truck rented and went to get the truck. My husband and I looked at the back of the truck to find trash, clothes, shoes and no hand truck that we paid for. So I went back in the store and told the clerk and then had to wait another 15 min for her to find the key to the other truck. So when I got the keys to another truck my husband open the back to check the truck and found two homeless people in the truck sleep. When he told them that they had to get out of the truck because it had been rented the homeless man started cussing at my husband and trying to fight him and telling him that he is evicting him from his home and my husband and the man got to fighting. This truck was also nasty and not clean as well. This is a bad representation of your company and I want a full refund for my money that was paid in the amount of 120.00 and I will never use Uhaul ever again.

I dropped off my vehicle on a Tues morning at 9am. I received an email and contact from the recovery department Thursday bc my vehicle was never checked in even after I contacted Uhaul 3days in a row to advise of the situation. A district manager had to get involved bc the location refused to follow up with me or Uhaul. A district manager had to physically go to this crap of a location just to finally check my vehicle in. The services received at drop off was beyond below expectations and if you all would like to keep customers then I would recommend not contracting with this gas station as a provider.

The gas tank was on 1/8 of a tank from being empty. They tried to make me full up the truck When I receive it empty. I took a picture of everything. The back door was very difficult to close. Going there was not a good experience

Stop double charging consumers for renting a truck which broke down during the move knowing Roadside Assistance was called out to fix the truck and test drive it before it could be returned. Resolve the incident by issuing a full refund to the consumer for the inconvenience of driving an unsafe prepaid for truck which could have resulted in an accident due to bad brakes. Not ethical to rent out unsafe equipment then double charge the consumer including gas mileage which was absorbed by the mechanic who needed to test drive it before I could even return it. Bad business pratices

This was an awful experience using the mobile pickup. I had to wait and wait for "Approval" after finishing the app instructions, and it never got approved. So my whole family was waiting for over an hour, and we had to get on the phone with some guy to manually process it. I will never use the mobile pickup option again, probably never use Uhaul again in general to be honest.

The gentleman who assisted me didn't know anything about U-Haul process and didn't make sure I had the appliance dolly I purchased so I had to come back to get. Before I left with the truck there was another truck in front so I couldn't get out and it took him an hour to find the key to move the truck that was blocking me in.

Has was 1/4 off have pics ...they Wouldn't make it right. Truck nasty and tires low

If that location keeps up the excellent job that it's doing now there shouldn't be any problems there.

Display a sign showing that it is a uhaul service center.

I was suppose to get a truck for a one way for 26 hours instead I received an in town truck with one way tags. No confirmation contract or drop off location, ended up in Arizona with a extra bill no one wants to accommodate because from what was explained the agent who rented me the truck had been employed for quite sometime however still managed to get the information correct. Highly upset and disappointed

I had to wait 20/25 minutes just for someone to help me just to get started with the check-out process!!! (The guy at the counter couldn't help me and told me that I had to wait for his co-worker to finish emptying the trash bins outstide. He never once went and told the guy I was waiting to pick up my U-Haul that I had a reservation for! And once the gentleman finally came inside, I had to wait for him to help checkout the other people at the gas station befor he could help me, which took Forever! Meanwhile I had my mom, toddler, and infant waiting in the car for me because the pick-up location was super sketchy!!) And neither of the guys working there spoke very good English.

Please improve your reservation functionality by allowing notifications of some sort if someone reserves a vehicle before another person and they need it longer than when the next person reserved it. Also please improve your maintenance accessibility. The employees that I worked with just to get the trailer did not have any person to call when we needed help detaching the trailer because the lock was broken on the trailer.

My experience was horrible. I usually go directly to the u-haul store but took a chance using the app. NEVER AGAIN. The beginning of the process went smooth. I checked in, did all the steps on the app, but when it was time to go inside the gas station to get the keys, there was confusion and the guy didn't know what to do. I waited about 10 minutes while he called customer service before he gave me the keys. I left did what I need to do with the truck, gased it up and brought it back before it was due. Did the whole check out process on the app. Got to the completion part (the last step) and got an error message. After redoing it multiple times, I checked my bank account and I was charged the correct amount for my rental... Or so I thought. I wanted to get a receipt in writing so I went in the gas station to talk to the guy doing the u-haul stuff. He said just put the keys in the box outside, you're all set, they will email the receipt. The next day I woke up to 3 separate charges, overdraft fees and transfer fees (because my bank transferred money from my savings to cover the overdraft u-haul put my account in). I called u-haul, they have to do an investigation...3 days later, charged again. Called u-haul AGAIN. they state that I had the rental for THREE DAYS! (I needed the truck to move one couch across town...it took 3 hours, NOT 3 days). U-haul states someone will call me. After what seemed like a week, someone called said they would fix the whole thing... Still not fixed. What was supposed to cost me $107.40, has costs me over $300. I will never use the app again or anywhere other than the u-haul store. I'll just hire someone to move my stuff from now on.

The sign in kiosk froze so I had to manually fill out my paperwork and because it was a gas station I was left waiting at times so other customers could be attended to. Having an employee who is stationed to work the uhaul side would be great but the employee was nice & helped me the best he could

Go get your Equipment and peddle it somewhere else

There was not a wiring harness to connect trailer to truck, had to call my son t make one

The service was effeicient and friendly.