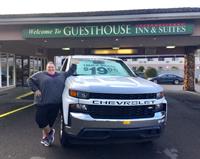 This U-Haul kept needing the battery jumped. And it lost air in the front tire overnight so my partner had to keep putting air in the tire The people I rented it from did not know what they were doing and when dropped off they gave no recipes or even listened to my complaints I woild like someone to get back with me 480-669-0156

The person giving me my keys requested that I wait to be seen although the app said I should step aside from the line. I was polite and was treated like I was being rude. They also wore their mask with their nose hanging out. The cab had dirt and several leaves and hairs. I took the picture it requested but it kept requesting the picture over and over until I chose clean. When I stopped at my location I found a moving dolly, hand dolly and several blankets inside with a second pack of blankets still wrapped up which I did not ask for or use.

Very disorganized, I had to wait for someone to be woken up to get my uhaul keys, and then I was given the wrong truck. I also didn't receive the dolly or boxes I requested.

This location was alright, but I wouldn't select it again for drop off. They don't have an actual drop off box for the keys; I had to take them inside the hotel office, which wasn't indicated on the app. So I walked around for a bit looking for a drop box that didn't exist. There was a lot of parking space for Uhauls, which was nice.

We were charged for 4 days when we returned it the second day. Also, charged $20 because their own software could not recognize either my or my son's license.

Honestly if I had known where this was I would have chosen a different location. It was a complete mess! The office smelled like cigarette smoke, no one was wearing a mask and it was just dirty all around!! The person at the front desk didn't even acknowledge me at first and just kept working on the computer. It took a half hour to get everything done which cut into the time we had rented it for. Also I asked her to split it between two cards and she charged it all on one. Plus when we went to drop it off she was sitting outside smoking! Then told us to just get the app to avoid having to deal with them. This location was also difficult for us to find and took us a good 15 minutes to figure out where it was. I will NEVER use this location again. I don't care if it's the closest one we have to us. I will drive farther for a better experience.

Maybe put a big u-haul sign outside or be clear it's a motel and where to park.

The U-Haul itself was fantastic, the online reservation and account setup process experience was great and the pick up clerk was great since she knew what she was doing but the clerk that was there when we returned the U-Haul was not trained how to process a return which forced us to use the app to avoid an additional $20 fee which was inconvenient and unprofessional even though the app was quick and easy. I was surprised that in this day and age that the U-Haul did not have a back up camera and a camera to see into the back from the cab or even just a window so you can better monitor your items.

The mobile checking is great but having to wait in line just to go over all the information again seems counterproductive.

Just told me to drop off the keys. Gave the mileage and gas level. Was told I could just leave. Ended up have a $65 extra charge for no reason or receipt. Will be calling customer service. Location was very dirty and worker said she needed her manager to do anything.

The location given to us was incorrect and no truck was there when we eventually found the right location 3 blocks away our remote phone access didn't work and apparently wasn't set up even though we were given confirmation from you that it was. The entire experience was awful and poorly managed.

Have someone telling me we're the office is to get keys and contract.

Talked with a person that was very kind the night before, as I had a text that sent a number for checking in, but that person knew nothing about UHaul rentals. I appreciated his forthrightness in letting me know, he was not trained in truck rentals. The woman in the morning, when we were picking the truck up, was extremely slow, not very knowledgeable, but she did try to help and found a better deal and a place to drop the truck off in Roseburg. She gave us the needed information of the address to drop off, and we were on our way. Problem was upon drop off, it was not a 1 way drop off truck, despite her telling us it was.

Honestly the previous negative reviews say it all. They are 100% right. The motel agent said she wasn't sure about rental process. Obviously there was no walk through on truck. Gas was not full and when I returned it at my destination I was told I had to fill but I explained I put more in it than where it was when I picked up. Agent in Clackamas was understanding. I will opt to only use official U-HAUL locations, No more random locations that only do this for extra cash without putting in care.

Rene was professional and sweet.

I was charged for a dolly that wasn't in the truck. Lady at pick up and drop off said notes showed Id be refunded $21. Called U-Haul to be sure and still no refund ?

This U-Haul is being run out of a shabby looking motel. We had a hard time trying to find it as there are no signs or signage stating U-Haul. So after passing it several times we decided that we would go into the motel and ask if they knew where the U-Haul store was and it was at that time they said they were. Also, when we picked up the truck nobody walked out there with us to look the truck over and the cab was dirty. I could not deal with that situation at the time due to the fact we were already running 30 minutes behind due to not being able to find the location. There are only three or four U-Haul vehicles there and they are passed the motel parking lot between the field and the parking lot in a little rocky area and they aren't even lined up. They're just sporadic around there. I absolutely would NOT recommend this location.

Everything was great, except I only drove it 18.1 miles (mostly freeway) and when I went to top off the gas upon retuning, I just stopped the pump @ 5 gallons. It probably would have taken more. Previous renter must not have completely filled the tank, or truck came from another location without complete fill upon arrival.

Train employees how to do a uhaul rental and return. Employees need to be trained!!!!!

The haul truck need an alignment. The truck pulled to one side significantly

This is a terrible location. It is located near a difficult intersection and is hard to find. Once there, there is no clear indication of where to go to return the equipment. I spent 20+ minutes searching and going through this difficult intersection over and over. What's more, my return wasn't logged until 5 hours AFTER I returned it and I was charged for an extra day of rental!

Reason I would NOT recommend this location is not the fault of the location. They took too long to check in because of computer problems (not their fault) BUT U-Haul should have informed me that this was a HOTEL and not a U-Haul location....this caused a major problem and waste of time trying to find it. There is a big difference between a U-Haul location and a hotel....U-HAUL NEEDS TO SAY THAT THE PICK UP IS AT A LOCATION THAT IS NOT A U-HAUL STORE.