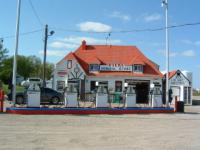 When someone reserves at a certain location and gets confirmation and then told it is not available you should refund them the extra 100.00 it cost them to rent elsewhere. Very disappointing and expensive. UNHAPPY ðŸ˜¡ Mollie Sander

Owner of Vick's Corner was very rude to me. I had ordered a utility dolly and a larger dolly in my order. The owner of the establishment tried to charge me for a piece of equipment I didn't order and when I tried to reason with him, he walked out and raised his voice at me. Will not rent a UHaul from them again.

The location had political propaganda being sold in the parking lot.

Very very slow. All other business is a priority!

My experience was good, thank you and god bless

Had to re enter several items that I had already entered online. Dealer said this is a frequent problem & expected it to happen.

GPS took me 5 miles in the wrong direction.

The price that my trip came out to be was absolutely absurd. I understand that there is a charge per mile, but maybe some different advertising should be done. I was quoted $164 and ended up paying $360 for my trip. I am not happy and will not rent from U-Haul again in any location.

Make sure the uhaul agent actually shows u how to use the trailer and etc...

Had everything reserved on line for quick pickup..he insisted in entering all the information AGAIN...I had waived the $14 insurance but he insistedI had to have it ...truck was dirty with alot of debris on floor inside box truck....I called on the way back when returning truck to get his gas prices, because I know they charge you a little more at site than if you replace gas somewhere else...for the convenience of not having to stop prior to dropping off...he said he couldnt see the sign that advertised gas price...but said it was the same price of stations in town...well thankfully I gassed it up prior to dropping it off because it was quite higher than in town....I now will drive the extra 15 miles for another location. Also store is filled with cigarette smoke which new that from reading reviews, reaao. For on line reservation and quick pickup because with having asthma I knew it would be difficult.....the only thing pleasant about the entire experience were seeing the kittens outside

The owner smoked in the small office. Would have been nicer if the office was better ventilated. Otherwise he was very personable and knowledgeable.

The headlights on the truck were very full and dim

High cost relative to other area pick up locations.

Very kind. Checked everything and informed us about the issues we had and why.

Vic went over all the equipment need to knows and that made our trip flawless. Thank you and thank you to Vic in spirit lake Iowa.

Not very friendly or professional service.

Vick's Corner World was fineâ€”not top notch clean or inviting, but not awful either. It's just an old place, and it was fine. We could put gas in the truck right there, and the worker helped us with this. The only thing I did not appreciate was that Uhaulâ€”not the Vick's Corner Worksâ€”determined that we had gone over our allowed miles when we got the final bill, and so we had to pay more than expected, and we hadn't driven the truck anywhere but from the dealer to our house to our moving location and to the drop off dealer!!! It wasn't much over, but the extra charge on top of the other Uhaul inconveniencesâ€”unexpected long drive to get the truck at the last minute, no cruise control in the truck, no moving pads availableâ€”just made me unhappy. I will definitely try another moving company the next time I need to rent a moving truck, and the reasons have nothing to do with Vick's Corner Wirld.

We were handed the keys. No assistance was provided. We had to figure out the dolly and the securing of the car completely by ourselves. The upper compartment leaked. Th I e main compartment was found to be wet when we opened the doors to load the furniture.. We had to dry the floors. We were surprised but at that point just assumed it had been hosed but not dried. Disappointed but believe all U Hauls do not operate in this manner.

Overall U-Haul has been a major disappointment Had a reservation 6 weeks in advance for a 26 ft. truck. The day before I was scheduled to move and close on a house out of town they said the closest truck was over a Hundred miles away and that was the best they could do. I asked the scheduling person what good was it to reserve a truck â€¦ She said to reserve a U-Haul doesn't mean that you'll get one. So I had no choice to drive 230 miles roundtrip and get one. Then the next day the truck they recommended was too small so I had to get another truck and that too was supposed to be an hour away and while on our way to get it U-Haul scheduling called and said It wasn't going to be there and the closest 15 ft truck was at a laundromat back home so I had to turn around and go back and get it. We were charged more for the 15ft truck than we were for the 26 ft. truckâ€¦ nothing like gouging the customer. Then we got a truck to get a couch and we got cheated a half hour out of the 2 hour time and U-Haul said we didn't fill the gas up to the level that we had at check in time. We were also charged for a dolly cart and blankets that we never even got. There needs to be competition for U-Haulâ€¦ so inept and crookedâ€¦ I will look elsewhere. Had enough of U-Haul will look to others for my next move.