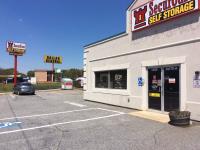 Lock box sign. I was told to leave key in the back hanging up. Today I found out that they had to make a key and the vehicle was parked all weekend. Confusion on someone part. I haven't looked but I hope I'm not charged for these days

Truck I rented was not there like it was supposed to be. The woman upgraded me to the next size up truck for same price that someone just returned. The equipment ran fine, but the fuel gauge was recorded inaccurate and I was charged for gas, even after putting gas into the truck. I was actually charged for more gas than I possibly could have used given the mileage I put on the truck. Second time I have had an issue with renting uhaul. Will rent from budget in the future.

Much better than what the other dealer was like.

Even though there was an issue with power/internet when I went in to pick up the truck, they had a way to do my contract over the phone with a person who had internet access, and I was out with little incovience.

Stacy, the facility manager, went above and beyond to make sure I had everything I needed and made the pick up and return process extremely easy!

The towing equipment to tie the tires were shredded. We stopped 7 times to retighten the straps. Told the employee she was too busy wanting to go to lunch

Perfect location, but not easy to get in and out of.

The on line App did not work when finding a location. The 1st spartanburg location I went to made the reservation at this location for me. They added insurance without my approval and did not tell me. I was then told that it was too late to change it. Sounds like they get a commission and slammed me.

I was called the night before that my pick up location had changed. It was only a few miles. I was called the morning of the pickup that due to the sites lunch I could not pick up the trailer until 2. I drove 500 miles to the area and had the return trip the same day. Having to wait for someone to have lunch when I booked the pick up time a week earlier was disappointing

This was not the location we preferred. We wanted to drop off at the Whitney road location in Spartanburg but they refused to take the truck, even though there lot was huge and empty. When we called and asked for a location the one they gave us was closed and we barely fit the 20.foot truck in their lot, You should not allow any U-Haul business to refuse a truck. It needs to be up to Uhaul to move them around.

I was scheduled to pick up at 10am. Didn't leave until 11am. The only lady working there was showing baby pictures to another customer that took 20 minutes before talking to me. Then made comments to me about Cam Newton being gay and just thought it was inappropriate. The trailer was also filled with a dolly and packing supplies that I had to remove myself.

The lady work3ed with us on drop[ping off the unit. She also stated that she would not have rented the tow dolly because the chain hooks were damaged.

Unfortunately I was not pleased with this site. I dropped my rental off after hours, parked in a place that was out of the way, took pictures of my mileage, and gas readings and dropped the key in the after hours slot. My problem....this site charged me for not having enough gas according to my contract. Thank GOD for cell phones, pictures, and due diligence..Thank You 1-800-U*HAUL, for your help in this matter

Nothing everything went smoothly and the lady working the office was very nice.

Make sure the vehicle is vacuumed and cleaned out after every use. The cup holder area was very dirty. The seats and area you drive in could have been cleaner.

Agent was the best i've worked with

Found every reason not to pay me my money not even a penny and suggested i pay more. She didn't even know how to work the computer neither time i went in there.

Person saw me sitting in the parking lot early and she opened the office for me to drop off trailer. Very appreciative of her service so I could continue with the rest of my day. I will definitely use U-Haul services again.

We had a great experience overall. The truck was clean and the fuel was full. The people we interacted with were friendly and helpful. The only issue we had was that the dolly and furniture pads took up usable space in the back of the truck. It was frustrating trying to work around it as we were getting in and out since we didn't use them and they were locked into place.

Was not informed about the $.90 per mile cost. Ridiculous.

Check availability before accepting order. Ordered an appliance dolly and none were available.