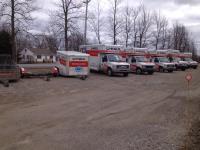 I rented the random trailer and was very satisfied overall. Trailer was a bit heavy and awkward to put to the hitch on the truck but the owner helped us, overall I'm happy with the service, my questions were answered.

Overall the rental was a pleasant experience.

My truck was rented from 11am Sunday to 11am Tuesday. On Monday evening, after I unloaded it, my son and I, followed by a friend in a car, filled the gas tank less than ten minutes from the drop-off location, then I dropped off the truck. I arrived after hours, and in the dark I backed up the truck into a space in the middle of their fleet of vehicles. After it was parked, I noticed (I had been there before but had forgotten) the sign that said to just pull the truck in forward. I assumed that was so that customers wouldn't have to wrestle with backing up a truck into a space, particularly if the office was closed or if it was dark. Having already backed it up successfully before reading the sign, I didn't bother changing anything. I made sure the truck was locked and dropped the keys into the after-hours drop off box (watched by my son and friend). I was well satisfied to have the job done and the truck returned before it was due. On Thursday, to my surprise, I received a charge on my credit card for an extra day's rental. I called about it immediately. A female staff person told me the truck and keys had not been returned, that she had been in the office on Tuesday and the truck wasn't there, and that she has some system of tagging keys and they weren't there either. The office is closed Wednesday, and I guess she finally clued in that the truck was there on Thursday morning. She kept telling me that I hadn't dropped off the truck on Monday (infuriating when I know I had), and it wasn't until I pointed out that I could prove I had based on witnesses, pictures, nearby gas receipt and GPS, that she reluctantly changed tactics and told me several times that she would return my money because she just wasn't going to argue with me anymore. I am not responsible for the method in which they keep track of their trucks and keys, or the fact that it appears she missed both on Tuesday. She did later call me to let me know they were reversing the charge for the extra day for which I was incorrectly billed. But I never received an apology and her insistent arguing that I had not returned the truck on Monday, and the implication that she was only refunding my money because she didn't want to argue anymore, and not because they screwed up, was offensive. I left that call feeling that she had implied I was lying (obviously). I have previously used that location and it was perfectly pleasant, but I am dismayed now that a) their truck and key tracking appears to be sloppy and b) that the staff person went right to the place of insisting what wasn't true. I will consider carefully how I use Uhaul in future.

I booked at one location for 2pm pickup and was told I would receive a call to confirm Tuesday. I never received a call or voicemail and Wednesday morning received an order confirmation that had a different location that was an hour out of the way and had it ready for 9am. I picked up there because I needed the truck and then when I called in to see if I could drop it off somewhere closer as I never chose that location and was told it would cost me several hundred dollars. I am very displeased with the entire process. I was also charged for moving blankets that I had requested but never received. Further, I received poor customer service from all call centre reps with the exception of Victoria at the regional office. She was great. The most stressful time for us in the middle of a forced move and this was the service I received. Poor service.

This is uhauls fault, not pick up location. Gave me a way bigger truck then ordered. Never specifically said this would happen or why. Called it a free upgrade when i called 1800 uhaul. Its not an upgrade when you don't feel comfortable driving it. Used online check in. Super annoying to use, had to use 3 different phones to complete transaction. Had issues every step of the way.

No trailer hitches or locks available for sale at this location. This meant that we had to leave, find the local Canadian Tire in a town we were not familiar with, buy a trailer hitch that fit as ours didn't and come back to pick up the trailer. The other problem was there was a ding in the front of the trailer that I pointed out to the fellow checking over the trailer. He needed to be reminded to mark it before we left and in the end, marked the wrong spot.

Doing the app or online was too complicated for pick up and drop off. Too many steps. Very frustrating!!

Excellent experience all around!

Great place to do business with !! Everything was perfect..

Your staff especially was great , your CSR she was polite friendly and informative

Great job all around!

No suggestions at this time

We feel there really isn't anything you can do to improve your service for the next customer. The staff are wonderful to work with. The vehicle we had was the perfect size for what we needed. Our rental experience was a good one. D&A

I found the on-line pick up process to be very difficult to use. I spent 15 minutes with the on-line agent getting through the approval process. Then spent about 15 minutes on hold before being able to speak with customer service. Despite indicating I preferred service in English, all prerecorded messages were in French. The customer service agent was eventually able to identify which truck was mine by the license plate. Then, once I found the truck, I had to spend another half-hour on hold with customer service before I could get the lock code. A very frustrating experience. Also, the cart and furniture blankets I ordered were not in the truck. Nobody seemed to take responsibility for anything, although I was credited for the missing items.

This location was good but we had issues with U-Haul over booking and not giving us a truck. Smith Falls location saved the day.

They were courteous and polite. Did follow up calls to b sure I had my truck and other products. Patient all I can say is excellent excellent!!!!

The one tire was very low on air n we were told to pickup on differnt location n drop off also. I only had rental for approxament 3 hours.

Took us close to 6 hours over multiple days to try and get the reservation handled properly just to show up at The location and be told the price was actually significantly more then we were quoted. Had issues while returning, had to call in because remote return didnt work and the refund we were promised took another hour on the phone to get processed. The online booking system is next to useless and the fact that vehicles are not shared between locations makes it much more difficult to have any faith in uhaul's ability to deliver an even passable level of service.

Service was excellent, can't think of anything that would need any improvement

First time renting and it was a pleasant experience.

Everything went smoothly for me. Thank you.

The receptionist was very friendly and helpful ??