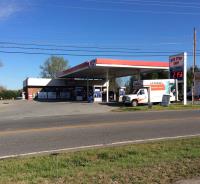 Got charged for miles when paperwork included an extra 75 miles

have a way to rent without going inside. This is a convenience store and I had to wait in line with a bunch of people not wearing masks in a pandemic.

The One Stop Shop in Shelby NC I am very disappointed in and have filed a charge dispute with my Visa credit card. They have agreed and are filing the dispute because the store made an unauthorized charge to my account after I left their location. I never signed off on the charge. I had called One Stop Shop yesterday morning and asked the gentleman there if I could return the truck in the evening because I had a prior commitment that Sunday and couldn't get the (empty) truck back to the location any sooner. He agreed to let me return it yesterday evening with no extra charge. When I asked for his name by phone to confirm this no charge, he hung up. I used the truck for one load, one trip (under 50 miles) and it had to stay in my driveway all day until I was able to return it that evening after my 6pm appointment in Charlotte. I returned the truck at 9:30 in the same condition that I rented it for, additionally, I filled the truck up with gas FULL, over the gas limit I was given when I rented the truck, even. I confirmed with the man the no additional charge and he confirmed. I thanked him & was on my way. After I left the One Stop Shop, later that evening a pending charge showed up in my visa for an additional $62.68 for an added day, an added coverage charge and charges for additional mileage! Why?!?! Not only did he charge me an additional rental day but additional charges on mileage (??) and coverage. I am very upset and disappointed in this UHaul facility. He never got my authorization to charge my Visa credit card, I never signed off on these additional charges. He just took it upon himself to go against his word and allow me to leave his facility before charging the credit card that was on file with the UHaul facility and contract from the Old Fort location. This is dishonest business and my Visa credit card is disputing the unathuroized charges from One Stop Shop. I hope the UHaul corporate office will evaluate this vendor and consider terminating their contract with this dishonest vendor. I will never use their shop again and will make others in the community aware of their dishonest practices. Sincerely, Jennifer Serio

Inside box of truck had lots of dirt. Also they reported the gas gauge higher than it was. I drove truck 15 miles and put in 2.5 gal of gas, that is 6 MPG. They complained so I put in another 2 gallons of gas, that 3.3 MPG. they complained but I refused to pay more. Also staff engish was poor and hard to understand.

The vehicle (windshield, floorboard, etc.) was not clean. I had reserved a 10-foot truck, but was told when I arrived that they only had a 15-foot truck. There is a U-Haul rental facility 5 minutes from my home. Why I was sent 20 minutes from the closest U-Haul location to get the wrong-size truck, I don't know.

I tried to check in ahead of time, but it would not accept our license image. We tried to call the One Stop, but it was a little difficult with the language barrier. I did not get my 20' truck, instead I got a 26' truck! It was huge! Same price, but still it was very difficult to drive.

Should not be neighborhood U-haul dealers! They delayed my reservation by 4 hours. They did not have my truck there at the site They over charged me through their gas station store They should not be in service! Have their license revoked!

A very busy quick mart, only the clerk working, barely had Tim to process check in. Cannot imagine trying to do a pick up here

Pick up took WAY too long. first the website was freezing and I couldn't do the truck share pick up and then The Gas Station attendant had to help customers walking in every 30 seconds. Drop off was fine.

Called to confirm pick up the day before. Was told everything was good. Arrived to find they did not have the correct truck. They did give me a larger one. At first was going to charge additional for the larger truck but in the end did not. The truck worked and the move was successful.

We left the gas tank half full just like it was when we picked it up in Durham. The attendant was telling us it had to be filled up which contradicted what we were told in Durham. Then he said it wasn't half full. I had to put $4 of gas in the truck to satisfy the attendant. He was very difficult to deal with. I should have taken a picture of the gauge in Durham to prove we were returning it as it was delivered to us. Good experience except for the return drop off.

Very difficult to understand the person when picking up the truck. He chose a return location that was different than the one I chose on the reservation. The return he chose was 3 hours away from my end location. Had to call and change it on my way back to my house to pack up the truck.

The rental was suppose to be picked up at 6pm. Arrived at approx 7 to pick it up and the uhaul rep did not seem to have any idea what was going on. Even after providing my information and confirmation # several times he was struggling to figure out what we had ordered. He then realized that the truck we needed had not yet been returned and so he called the customer that had it. He informed us that it would be there in 15 minutes. An hour and 15 minutes later the truck arrived. The attendant then had to verify all of our information multiple times (I would have thought this could have been done while waiting.) Even thought i had done the online registration we had to provide DL# and name and phone numbers several times. The process to do the paperwork took almost 45 minutes and we answered the same questions that had been on the online check in multiple times. I believe part of the issue was the language barrier of the uhaul rep but due to the extended period of time we waited and the number of times we had to give the same information multiple times I would not rent from this location again.

The guy barely knew English the equipment was missing one of the rear safety chains and couldent even connect the car trailer. The trailer was dirty had like dried sheetrock mudding but I was in a real hurry so I dident complain i just wanted to leave but you could barely understand him he sounded and act like a young kid.

Keep up the good work...

I spent 30 minutes on hold with no answer from the uhaul customer support phone number. My truck was changed twice without my consent which changed me from a 15' to a 26'. Why did the website let me book a one way truck at 15' if it was not available for a one way haul, which i was later informed of via uhaul customer support? Overall terrible experience. Poorly designed website and not easy to pick up the truck.