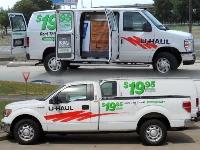 It was a very smooth procedure, very pleased with the check-in/out

The parking for Uhaul conflicts with Bedroom business. Lot was not designed to be a Uhaul location. very tight for navigation.

Clarity of how charges are done. I was overcharged and had to spend a lot of time on the phone afterwards to get a refund and to establish what we had agreed to and what I should be expected to pay for.

The I haul pick up and return went without any problem and the person at the location was very helpful. The person at the national number did a good job. However when he set up helpers he did not verify that they were available. He told me that I was to contact them to set up the time. When I called I got a voicemail and I left a message. No one showed up. I attributed that to the fact that it was a holiday. This caused a great deal of stress for my daughter and I. When I cAlled in the evening to try to rectify and have the charges removed from my card I talked to a woman named Leslie. She was extremely helpful and I want to commend her for going the extra mile to help me.

Not a thing. In and out in a flash. Very close to home which I love.

While I understand the need for security, the self pick-up requirements were very time consuming.

Did not keep what I put on my reservation and instead added insurance, an extra day, and very different drop off location. When I called to get the issues fixed no one answered and I had to leave a message. It's been over a week now and no one has returned my call. I understand that the furniture business Is closed because of the pandemic, but having the U-Haul side business open is ridicules if you can't even do simple customer service. The worst experience I've ever had and I've been renting U-Haul's for over twenty years.

No improvements! It was wonderful, friendly and professional. Thank you!

Called to confirm and everything was ready when we got there ! Excellent service.

Things that worked: -Andy was very helpful. He went out of his way to be flexible. For example, I asked if I could cancel less than 24 hours in advance, in light of the current situation re: coronavirus, and he didn't hesitate to help. And when I returned on a day when the retail location was closed, I was unaware that I had to use a mobile phone to check in the vehicle, and that a $20 "convenience fee" would be assessed if I didn't. Andy totally understood and waived the fee. I feel he was very helpful and kind. Three improvements: -I didn't get confirmation of my estimate when I checked out, so I was essentially renting the equipment without knowing for sure what I was going to pay. -I was not informed of the check-in procedure that I would have to do upon returning the vehicle (although as I mentioned above, Andy was very understanding). -I passed through a pay-by-plate toll during my move. When I called to resolve this, I was told I'd have to figure out how to pay the toll myself. Some companies are able to roll this into the fee for the rental, or find some other user-friendly way to do this. I don't feel this was Andy's fault, but rather that UHaul should have a better system for this.

I reserved the truck for 10am. At 10:02, when I was in my car on the way to pick it up, the owner of the location called to tell me he would be late. This was doubly bad because I didn't get the truck when I was supposed to, but also that he waited until that time to call since I was already on the road. He should have called earlier if he was going to be late. He told me that his store was actually not open on Sunday, si U-haul also screwed up because it's website said it was open. So overall not a great experience.

I've never had a bad experience with uhaul. I rent 4-8 times a year for personal and business. Always have the right equipment when I need it.

Thanks Burlington Bedroom's the best furniture store by far

Keep the friendly dog around.

Clarify the return policy and process. I thought my rental was for four hours so I returned it before my time was up. The next day I got a call from U-Haul to see if I returned my truck. I could have kept it for 24 hours to use it

The staff is fabulous and go out of their way to make your rental a positive experience!

From start to finish we had a great experience and love supporting a local family owned business which partners with U-Haul.

There was confusion about the date I drppped it off and I had to play phone tag and endure long hold times. I dropped it off early and was almost charged for 3 extra days.

Nothing needed!! Everything was as smooth as silk!!

This was incredibly convenient, just up the street from my house! Thanks!

When I got to the location where I was moving and had paid to reserve a storage space on the uhaul website, I was told there were not any available. I was asked to leave the truck there by the Uhaul staff instead of returning it to my original drop off point. So I was more than happy to agree! It wasn't until after when I was charged 500+ Dollars!!! Why ask me to leave it there if without telling me about this extra fee!? I don't know how you manage to do business at all. It's absolutely a rip off and I will never use this company again, or let anyone I love go through this same awful experience. I will pay the 800 f-ing dollars I paid to a moving company that will do everything for me! Uhaul is an absolute headache and adds far more stress than necessary to an already stressful circumstance.