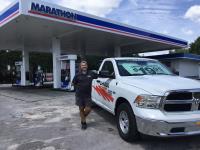 I had rented pick up & trailer.. When I arrived I was notified that there was no hitch adapter block/ ball & had to buy one .. How can you rent a truck & trailer without adapter & expect client to buy one .. unacceptable . Regards Ken Russell-Murray

Location is very dingy and not well maintained. The pick up truck i rented was disgusting. It took me 2 hours when I got it home to clean and sanitize it before I felt comfortable with being in it. Not good during this stressful COVOD 19 time. I complained the evening i rented it and General Mgr Paul Bottitta reached out to me with a $25.00 credit for my trouble. However you must do something with this location because I will not rent from there again.

Kevin was fantastic and helpful. Thanks for the help. Truck was brand new and performed well.

It was a difficult time getting the key for the truck.

I was overcharged $100. The proprietor added an extra 100 miles to my 16.5 mile trip. He did not check me out when I returned the vehicle,he stated that he would send me a receipt. He also entered the return time as 3:07pm when it was actually 1:00pm. I will not use this location and will advised all my friends and family not to as well. The location is Metro Mart at 6309 15th Street East Bradenton, FL 34243.

Although we had registered to drop off our trailer at this location well in advance and had the paperwork to prove it, the man at this store told us to go away and take our trailer somewhere else. He was so rude and didn't seem to care that we had just driven 15hrs straight and had already arranged this as our drop off.He was very angry with us for wanting to bring the trailer there and barked at us where to put it when my husband challenged him on this policy after being told to go away to he airport across town. He did not help direct us into a spot to unhitch & walked around with his arms crossed Or texting on his phone back inside his store -with very curt replies as to where we should leave our already folded moving blankets. He was angry bc too many people had been dropping off trailers and I guess he would have preferred trucks instead. Not sure why U-Haul continues to do business with this man as it was an uncomfortable experience and borderline aggressive interaction. Needless to say we were as polite as possible and got out as fast as we could! I would most definitely NOT recommend this for U-Haul customers.

1) Had to hook up myself (68 years old) or he would charge me $20 for him to hook up. NEVER experienced this at a 'real' UHAUL store. 2) Trailer was not what I ordered. I wanted a 5'x9' with a motorcycle choke in the front so I could haul my motorcycle. This one did not have that feature. While calling in the parking lot I was on hold for almost an hour being bounced around to different centers, each with their own waiting time... 3) Finally, this trailer was all beat up with multiple scratches and dents. Both fenders had multiple dents.

Mobile app was useless. I was overcharged for my rental nearly 40% of what it should have actually cost. Will be contesting the charges with uhaul and my bank. Was misinformed about the price of road safety insurance . As well as being charged for additional inspection fees due to the app failing to work.

I have no suggestions to improve the service or equipment. It was all that good.

Way over charged and ripped off

Nice owner, helped me out a lot !!

Crowded, but site had a good selection and the only car dolly I needed.

When I picked up the vehicle the person that I got it from took the keys right from the drop off box then gave them to me and I immediately had a bad feeling. (Assuming he never checked the fuel levels or mileage from last renter) I noticed about $196 worth of a hold put on my credit card that I used to reserve it which I found odd for a truck rental that was 29.99 for the day. When I got into the vehicle the fuel was pretty much empty but I had a short trip so I moved forward. I used the truck for 4 hours and a total of 14 miles. The truck was reasonably clean which is about the only positive thing I could say. Once I returned the vehicle the hold stayed on my card for 4 days and when I did finally get charged, what I was expecting to be 44 dollars was over 100. I was charged for 2 dolly's that did not come with the vehicle and I never received, and a fuel fee of 30 dollars plus 4 gallons of fuel after I put in 2 gallons to replace what I used. I will never use uhual again and frankly after this I would rather have carried every item we moved the 2 miles the move actually required over getting charged for things I never received or used.

Upon arrival, my truck would not start. There was no one around to help, I was put on hold for 45 minutes to even get to talk to someone from U-Haul to explain my scenario. Upon explaining that I was on a tight time table and needed to just switch out to a truck that worked, it was explained to me tha was not an option and I had to wait up to an hour for someone to look at this truck and attempt to get it running. An hour and a half later, a man came and changed the battery. By this time, we had lost all of our helpers who were willing to help us move, got eaten up by mosquitoes, was waiting in the dark at night in a very unsafe location and did not end up even getting to move anything that evening as planned. Never, ever, ever, will I pick up a truck from U-Haul when there is not a human there to help. Ridiculous and terrible customer service.

I went to rent from this location the night before at 8PM and the gentleman that owns the store told me that they didn't do any U-Haul transactions after 5PM.

One man show, convenience store rather than a full rental centet

I have been satisfied with my rentals from all Uhaul vendors, including this one, in the past. However, this time, the trailer had a lot of broken glass in it, and my biggest complaint is that I was charged too much.

The rear left lights were not working because they were not attached and unable to be attached due to missing wires. The man said he checked the lights, but once on the road (loaded), we realized half of the rear lights were not connected. There were bolts missing from the floor of the unit permitting water from the road to get in and soak our items.

we were sent there for drop off, there was a location much closer to my house, but we were not given the option, also the place was closed when we were there at 10 am we waited over 30 min. for the attendant to return. we just did the key drop off. not very comfortable doing that.