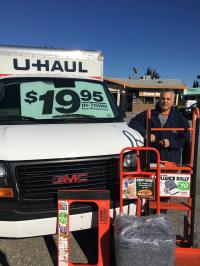 Took two hours to collect our truck between waiting for the manager at the location to figure out how to sign in and get hold of someone on the phone for U-Haul. Incredibly frustrating experience that added two hours to our move time. We were asked to provide four phone numbers, employment verification and/or a passport by the manager. We were then told none of that was required by U-Haul. When Customer service finally answered after a 20+ minute wait I told the person on the phone we couldn't pick the truck up and he stayed silent for 3 minutes clicking on his computer until i had to ask him if he needs the reservation number which he said yes and that i needed to redownload the app. He was very annoyed i asked to speak to a manger but finally she took over and was able to help. Also, the truck's headlights were dangerous- one was dim/ barely working the other pointing in the air not the road. Overall we never want to deal with U-Haul again.

Someone need to be onsite to handle the transaction. The vehicle was extremely dirty. Not well maintained. No one was on site to inspect the vehicle with me and my camera was not able to capture all the damage and uncleanliness of the truck. Also, if the move is as local move, more miles need to be added. 30 miles is not enough to drive from the pick-up location to the apartment, then to the place I am moving to, the gas station and to the drop off place. All these things need to be accounted for. Where I was moving from, to the new place was about 30 miles, so how can I pick-up the truck and drop it off and get gas all within 30 miles. I was given 24 hours to use the truck, but only 30 miles to drive. That is very unrealistic. Very awful experience for pick-up.

Having to use an online system was horrible. It worked very poorly.

Horrible experience with this location. Horrible Customer service cost me extra 150 bucks. After renting from uhaul my whole life...I will never again trust to rent from you incompetent morons ever again.

I reserved the truck at the Curtner location mainly because I was close for pickup at that location, and my storage was also convenient near that location. One day before pickup of the van, I was told to pick it up at the Laurelwood location. Which I was upset yo do because I had to go all the way to Santa Clara to pickup. That was very inconvenient for me to drive all the way over there when the Curtner location had plenty of trucks for me to pick one up there at this location. I was very upset about that having to go all the way over there.

It took me 45min to locate the truck and keys. No one seemed to know where each item was, thus I went from place to place (and back) until I finally got done.

This location is a gas station that deals in Uhauls on the side.

When I received the truck there was visible damage to the top right portion of the storage box. I asked for paperwork to document the damage but none was available as the owner of the Valero was not there and just the attendant. I had two friends who were helping me move follow the truck to make sure that the damage did not get any worse.

This is the worst experience ever, I used U-haul before, I liked the experience, but this location and also the App were a disaster. Firstly, this address is a gas station right next to the U-Haul storefront. The location was very confusing because we all thought it should be the U-haul store location, but couldn't find the truck in U-haul parking lot, so had to get in line. After almost 45mins in line, the store staff told us our truck was parked at the gas station because they work with the gas station, and the gas station is its own location, separated from the U-haul store. So we found the truck at the gas station, the gas station staff knew nothing about the U-haul trucks, all they knew was that the trucks park there. So we had to still use the U-haul App for next steps, and it was a lot of troubles to get through the "driver's qualification" step. Finally with the online chat agents' help we got the truck and key, spent over 1 hr already. We used the truck for about 1.5hrs, when we returned the truck the App said we needed to fill up to a full tank of gas, but when we took the truck it was only half tank gas. Luckily we took pictures when we took the truck of the gas level and mileage and can prove it. So we called the U-haul customer service number and explained the situation to an agent. The first agent picked up and said she'd look it up then hanged up. I called again, the second agent said they can't do anything, we need to talk with the gas station staff, at least 1 person is supposed to know the U haul stuff. So we went in the gas station and still no one knew anything about U-haul, but they called the U-haul store next door. The store associate was very nice and he asked for our reservation number, ended the reservation on the call, and told us to just fill up to half tank at the level when we took it. The total of less than 1.5hrs and 30mills usage cost us ~85$, and we spent a whole Saturday on this. Very bad, please improve your location/partner qualification and the App's customer service.

It was sort of a hassle arriving and trying to figure out what truck is mine and how to get the key. There were no instructions to get those items. I had to talk to the Gas station attendant, who was able to find me two numbers to call. No answer on several calls for the first number. The second number connected and the person took down my info and told the attendant to hand me the key. Also, no instructions on how to return the truck and key. I have to call the number again and get help from the person to where to drop off the key.

This business unfortunately had to deal with this situation. The gentleman was nice and efficient even with the complications....

The truck was given to me with less than half a tank of gas, visible by the fuel gauge on the dash. The Uhaul contract clearly indicated 1/2 tank. When I brought this up to the rental clerk, he did not seem to care. He did make sure to suggest that I fill up the truck tank at his service station, where the U-haul office is located.

The gas station attendant was uninformed of the U-Haul contract. He said he knew nothing of the U-Haul parked nearby, and sent me on my way. I went to the nearby U-Haul Storage Center to find answers. They tell me the Valero attendant is indeed supposed to give me the key, and to speak with his manager if he continued to refuse. I eventually sorted this all out, but wasted 20 - 30 minutes. During this time, my movers were also sitting idle. To add onto this poor experience, the same Valero attendant was rude, and was more interested in his phone than his customers. I was only able to make progress in the rental and return when on the phone with his boss. Overall, a terrible experience.

Don't like the amount of time it takes to pick up a truck at the pick-up locations that are gas stations. The truck leaked in the upper front edge, and we had to spend time calling friends and getting tarps and extra blankets to make sure our beautiful wooden bar did not get wet on the long drive to Santa Barbara!

Staff did not speak English too well and the rep for U-Haul was not on site. Also I returned truck at 10:30am and was charged another $40.00 for an additional day ??? Why is this

when i called to confirm my reservation he tried to argue that i didn't have a reservation with out asking my name or a reference number. when dropping off the truck they tried get me to fill up the tank past what i received it at. and then wanted me to pay $4 per gallon used. tried to charge me for extra blankets that i did not receive at pick up or use. Non of which was not stated when i picked up the truck..over all not professional at all. also had to bring it back to the pick up location, when i first booked it online to return it to a different and closer location poor communication prior to pick up. would NOT use this location in the future.

Watch out for hidden fees because they don't tell you!

The floors on the passenger and drivers side were filthy dirty with what looked like dried concrete. Did not notice this until I reached the move destination.

The person responsible for renting the truck had forgotten that there was they had a truck reserved that day, so he wasn't there. The person at the cash register kept trying to call him, but he didn't answer. I was then told I had to walk over to the UHaul facility and have them transfer the reservation. After I started walking she ran after me, she had finally gotten the guy on the phone. Overall it took more than 30 minutes to rent the truck. Horrible service.

Clean the trucks prior to customers using them. Truck bed contained too many bugs to count!!

Uhaul owner (named Iraj - called Ed) wants to try to find every way to rip the customer off. Usually I had very good experiences with Uhauls I rented before but this truck was very bad condition. To fix: Close this location or change the owner who is also owning a gas station. Is never at work and expects customers to talk to him on the phone. No receipt given,...

Not much. The people were very nice and a pleasure to do business with

Make sure the rental vehicle as oil and water and windshield fluid topped off, and correct tire pressure. And make sure to disclose all the fees.