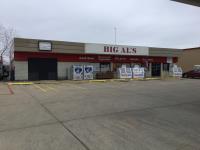 Kind service and a wide selection of rental Trucks.

Everything was great. Very friendly owner!

Did not have moving blankets and I still got charged for these. I am pretty upset then I got accused of stealing them. Very unprofessional and no worth it.

Make sure customers know what features come with the truck. Make sure employees are trained to rent out and return vehicles. I turned my truck in before the store was closed and the clerk didn't know how to return the equipment

This location the people were very helpful and had the right truck when we arrived. Thank you

Have everything ready, make sure additional Items are in the truck already. Make visible that truck might be in the back

Everything was handled very professionally at Big Al's.

AC on the truck blew up on the windsheild only. I was double charged for the rental and have not been able to get anyone to contact me to resolve this. There is a rediculous 10 to 15 minute wait for customer service if calling.

Customer service was excellent. Truck was clean, comfortable and operational as expected. My only problem with the rental was the .99 cent per mile rate fee which is excessive and absurd. Mileage fee needs to be reasonable for my repeated business interest.

Nothing, on my part, it is a great location and friendly place not far from where I moved, I will trade at there store as long as I live here.

The clerk at the pickup location had NO idea how to handle rentals. She had never been trained. She called her boss & he directed us to call someone at u-haul to further process the rental. Major holdup. The agreement said that if I arrive before 5pm there would be someone to assist me. This was not the case. When I returned the rental 24 hrs later, I was asked to write down my name, phone #, date & time of return on a scrap piece of paper. Seemed unprofessional. I wanted to know at that time how much my credit card was going to be billed. The clerk had no way of knowing & had no training with rentals. She was, however, very friendly & apologetic. Her boss was another story entirely. After my belongings were in the Uhaul & had arrived at the destination, I wasn't able to get the door open. I called the # on the contract in my email. The semi-foreign speaking man told me to, "find a man to help you." I felt this was very chauvinistic & inappropriate. Overall, the experience with the truck was wonderful. It drove well & handled my moving needs as desired. It would be helpful if the clerk actually had some training about rentals.

35 miles from where we unloaded. I know there are U-haul locations closer. Why did we have to drive so far? And charged $172 for 2 extra days...caused by wrong size truck! Seriously, this has been a horrid experience!

This location was way out of my way and the truck had bald tires and needs transmission looked at. I always use Uhaul and still will, but this experience with the Uhaul you provided with was awful. I was very disappointed. But uhaul is awesome! Just this one truck stinks!

Took over an hour to rent a trailer. Never use this location again.

Didn't seem to be very knowledgeable

Apparently they did not know I was coming to pick up truck. It took 45 minutes to get any service. The only person at station knew nothing about the uhaul business. She was a new employee for the convenience store. The owner hung up on me. I had only been advised the evening before I was going to have to drive 45 minutes one way to pick up truck. I was promised $25 off for that inconvenience ( by uhaul agent of phone who got contract fixed up) but did not get it.

Make sure you know what you have in stock at each location. Also the customer service was terrible! He had no idea what he was doing and even asked me to wait while he checked out other guests! What should've taken 10-15 minutes took basically an hour! Also the mileage charge from this location is crap! Overall if there was any other company to use except uhaul I will use them the next time! No Matter the cost!

Fire him terrible service. Took 2 hours to rent truck. He waited on other customers. He was rude to my wife because She is a woman. This Roman fella went out of his way to over charge us and blame us for it. He us the most unprof

When you reserve the truck make sure you are there at the exact fine you reserve it for. I originally told the guy I would be there about 9:30-10:00 to get the truck on moving day. On moving day, we were delayed a bit at the house, nothing to do with the truck rental. I called him about 9:30 and told him it would be closer to 10:30 before I picked it up. He said no problem. He said the truck has 1/2 tank of gas and needs to be returned that way. I snapped a pic of the gas tank and the odometer leaving the pick up location because there was less than 1/2 tank of gas and to record the miles., which there was nothing on the paperwork showing the odometer reading that Uhaul has recorded on their system that I could see. After noticing the tank being lower than he said, I wanted proof upon return but didn't have time to go in and argue the fact as it took him a bit to hen type in the info when I checked the truck out. The next day upon return, with the tank of gas CLEARLY above 1/2 a tank, (which was a more than the truck started with), a lady checked me out and she was much friendlier than the guy that checked me in. I told her the odometer difference and showed her the pic. She apologize but said there wasn't anything she could do. I knew I had a two day rental charge because I returned it past 10:30 when I checked it out. Little did I know, he started my rental time at 9:30 and the full day rental shows on the email I received AFTER I returned the truck that it has to be returned by 5:59 that evening. There was nothing I noticed on the limited paperwork I received about at the time of checkout and what was considered a full day. I asked if I had until the next morning to return the truck at time of rental checkout and he said no problem. The guy went to check the odometer and gas tank. I told the lady the mileage that was on it, and she said ok and checked me out. I asked if there was anything showing the mileage when I checked the truck out. She said their printer wasn't working no but I got an email with everything on it. I had a two day rental, but it was the principle of the matter that I wanted to look at. There was a 4 mile difference between what the system showed as the mileage and when I got in the truck at checkout. After showing her the pic I took with the original miles and the extra gas in the tank that was required knowing I wouldn't get anywhere with that, I proceeded to get in my truck to leave. The guy comes running out as I am leaving, wanting me to show him where there was at least 1/2 a tank of gas in the truck!!! I walked over to the truck, started it up, and had to show him where the gas gauge was that showed over a 1/2 tank and the pic I took leaving the checkout showing less that a 1/2 tank just to make a point at this juncture. I got out of the truck beyond livid and left rather than causing a scene that wouldn't have accomplished anything productive in the situation. Apparently this guy doesn't know