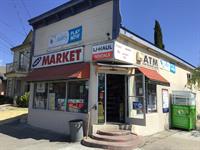 The parking area is not well maintained and the entrance to the lot is too narrow.

The uhaul truck I rented was very dirty. Not well maintained.

The location was really horrible. There was little to no parking available for the car that we came in. If there was, it was only at a yellow zone aka freight unloading zone. And the store clerk just told us to park in the yellow zone. My friend quickly denied this because we knew his car would get towed. The area was dirty, smelled, and there was dog feces everywhere. We then told him that we parked in the area behind his store where the Uhaul vans were located. And he kept saying yes AND no to our request to park there. We were so confused. The process to just getting my key for the van was confusing. I had to speak to a man on the phone who was asking me to reiterate information that I already filled out online in a loud, busy intersectional liquor store. The location behind the liquor store was a broken down home where a family was fixing their cars. This family would not move their own cars to allow us to back out at all. It took us just 10mins alone trying to back out the UHaul van. My friend told me that the owners are supposed to take photos or ask me to take photos of the van's condition prior to using it. There was no inspection, or any formal process down. It all seemed so shady and under the table. I really would NOT recommend this location to anyone.

Well i called only to explain where i left truck and key. Owner of store wouldnt really indulge a listening ear, so i could explain all details, also kept cutting me off. Also got a bit upset. However he did apologize, i also inturn apologized for hanging up. Afterwards he had someone come meet with me. To get equipment

The man behind the counter at Paul's Market was probably one of the most pleasant people I've ever met. And, I do not mean just in the circumstances of ordering a U Haul - I mean in general. I was moving for the first time, and using U Haul for the very first time. This man spoke so kindly to me, never was frustrated, even though we had miscommunications through the COVID masks. I had a wonderful experience picking up my U Haul and dropping it off here. Please know - these experiences matter. And, today I was glad that in this small, yet big way, I had one less stress during my move in day because of this man.

They were friendly and quick!

An odd location for a Uhaul Pick up, but the service was great. He helped me get a Uhaul last minute and everything went smoothly. Thank you!

The whole process for getting a uhaul was really simple. You can put in a reservation online and once you get there, you go through a few things with the associate like license and emergency contact. You get the keys and before you take off, you do a walk through of the vehicle. You can upload photos of any previous damages made on the car so you don't get put at fault for them and confirm the miles of the vehicle. Once that's all done you're all set. Singh was amazing. He had a great personality and was incredibly friendly. I would definitely recommend the location I went to based off the customer service I received.

The best service I received from U Haul. Friendly, professional, and helpful. He is a caring and loving person. Wish the world would have more people like him. Gloria Johnson

I have three separate charges from this uhaul spot. Also previous renter was late by 30 min and owner still Started out time at 2:30 rather than 3.

tight parking space hard to back out

7:30am pick up arrived at 7:20 , workers didn't provide accurate code had to come back at 10am and delay move

Include mandatory insurance in the price, not thrilled with having my budget altered at the last minute.

Check-in process needs to be simplified or allowed to be done beforehand (if this can be done then make it apparent).

I have several issues with my experience that I feel were not only dissatisfactory but also threatened my life. 1. The passenger end of the truck was not clean, primarily because of the dirt that permeates the entire lot where trucks are located. There was an errant bag in the back as well. when I came in. 2. I was not provided the two dollies that I needed for a successful move which made the moving process take longer and caused undue stress and increased fatigue. 3. When we drove for 10 minutes on the road, we had a message alert us to an issue with the air in the tire. When going to a gas station to fill it, the cap on the front right tire was missing. When trying to refill the dashboard said, "Service needed, monitor system" which we didn't know what it meant but were limited on time, so we powered through thinking we had addressed the tire issue and it could be checked later. After loading and heading back on the road, the truck in frequent intervals began to shake violently because of the location, we tried to just get to the location and get off the road as soon as possible. This limited our ability as well to fill the tank as we were supposed to. 4. When trying to deliver the truck and keys, the lock box was locked and no one had the code. We called uhaul and they did not have the code, When using the check-in and the check-out in the app, no code was provided. The proprietor called at 11ish pm to ask when we would deliver the keys and the truck and then were told to not worry about it and to "take our time." I was told as well by the operator on the phone when I tried to deliver the keys that i should just deliver when they opened because there was no box to leave the key. At 10ish am, I received a frantic call that somehow "20 people were waiting for the truck" and that it was urgently necessarily that I come as soon as possible to deliver the keys. I mentioned the earlier conversation about no rush and that this could have been alleviated if I had a code and could deliver the keys the previous evening. No acknowledge that their process is inefficient and the true cause of this problem.

The Truck I rented was not available. I drove half hour to get to that location and they did not tell me before. I had no chance at 4PM at night to find another truck. They gave me a van that was not clean. I had to hand load my cargo because I could not use a forklift. When I returned the van they said sorry. This increase my labor cost and material cost because I had to leave two pallet at the airport. I have rented there many times before but not again.

Singh made sure I got what I needed for my move, and the pickup and drop off process was super easy. THANK YOU, Singh! :)

Nothing. Service was great, van was clean and no real issues,

This was my first time renting out a Uhaul to purchase some furniture. Store owner was super friendly and helpful with the process of renting out the truck and returning it. Highly recommend!!

it was dirty when i got it on the inside, but i only needed it for a few hours. the cleanliness was fair enough, and im glad i wasnt charged and required to clean it due to the previous customer. paul is fantastic

Pauls Market is a fantastic place to pick your truck up. The owner is a wonderful person and the trucks are well taken care of.

Provider was great to talk to and very accommodating but gave wrong information regarding the ability to drop off the trailer at the nearest UHaul to my moving location..