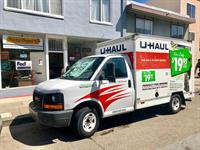 My reservation indicated the Postal Depot at 2636 Irving Street is a 24/7 drop off location. However, there is no parking lot (which would have been fine, if i had received instructions in advance. I was lucky enough to find street parking, but there was no dropbox for the keys. When I called the 1-800 number, no one was able to help.

This location does not have a lot for 24 hour drop off, and there were no instructions on how to handle. I spent about 30 minutes with uhaul customer service trying to figure out what to do, and was left feeling uneasy as the result was to â€œpark the uhaul on the street in unrestricted parking and leave the keys in the mail drop with a note of where the truck was left.â€ The mobile drop off helped a bit, but beings it was Saturday and no one would be working until Monday (and being new to the city), it was not a good feeling to start with. I would suggest only doing drop off during business hours in hopes that would be better.

I had the worst experience at the BAYSHORE location. Very strange the are the largest location and the refused me service, did not kn pi w how to process two cards from t hff e same bank account? It was awful...

You offer 24/7 pick up, but that is not at all what I got. The guy was mad that I got there late. There was no way to pick it up without him being there, so I lucked out that he was still there. He questioned me up and down about dropping it off. Overall, a terrible experience picking it up. Don't claim a 24/7 pickup/drop off. That is not at all what it is.

Had checked in electronically and agent was painfully slow. Added insurance when I had declined it so we had to start over. This experience has caused me to decide to NEVER do business with UHaul again.

The guy who runs Postal Depot was really condescending. He beat around the bush when talking about policies and fees. I would highly recommend going somewhere else, but if everywhere else is booked (as it was in my case), then this place will have a truck. If you have a choice of anywhere else though, take it. He was super patronizing, came out to me in the truck three times: First, to tell me where the parking break is (I already knew this). Second, he came out to move the mirror I already moved. Third, to tell me the mirror doesn't adjust, I just have to move the seat. That also seemed dangerous. The mirror swings out from the door, but you can't adjust it from there. After hour return fees: I wasn't told when booking the truck online about after hour fees. I also had to ask him 4 times to get a straight answer of when exactly "after hours" is. Extras: He accidentally tried to book dollies and moving equipment when I said I didn't want it - should be opt in, not opt out. It looked like a very old system that he didn't know how to use/navigate.

The staff at the rental location was efficient and very helpful, including where to park my car for the day. My paperwork was ready when I arrived. Returning the truck was easy and the staff helped park the truck when I returned.

This is a terrible location with bad business ethics.

It was a pretty good experience. The gentleman running the shop seemed a bit grumpy when I first showed up, but seemed genuinely happy when I returned my rental on time. And with a surplus of gas The van was perfect mechanically. The rear view camera was very welcome! The interior was nearly spotless. This was very appreciated! The lack of tobacco odor was simply divine. I look forward to doing more business with this dealer as it is very close to where I live. Thank you U Haul!

We originally made the reservation for another location, and it was a one way. The other location was overbooked, and we were offered a lower price to return the vehicle to the original drop off location. Upon returning it, we were charged an additional fee that we were not told about, after traveling all the way back as we were told.

The owner was not open at the indicated pick up time.

Terrible, terrible customer service. Don't tell me it's 24/7 drop off when it's not.

Uhaul was late and communication toward resolving the problem was not productive. Also, The receipt was not emailed to me as requested.

There is a slippery boss.

Super convenient. He let us take the van longer because we had an issue with the website when ordering. He was super nice about us being a few minutes late. Great experience thank you!

So easy, and very convenient.

Desk Clerk was rude as hell. Not going back. He was extremely impatient from the time I walked in.

The customer service line was challenging to get through to leading up to the date of my pick up. Once I reached someone, the representative apparently made multiple errors to my reservation. The pick up location had been changed as well as the time, without any real advanced notice to me. When I arrived to the pick up location the U-Haul representative was very unpleasant. Additionally, the vehicle did not have all the equipment I'd ordered, therefore I had to drive to another location (47 Cambon, SF) to pick up a dolly. Once there, the representative told me that the previous location should not have removed the charge for the missing dolly, however he attempted to correct the situation as best as he could. This was the only true customer service I received. Despite this, I would not recommend U-Haul to anyone, and I will not use this service in the future.

Van ran well until trip back to return it. Broke down on a busy intersection. Not easy to forget. Location on Judah is convenient to where I live, they were not the problem.