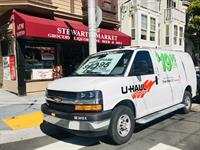 The customer service verification experience was unclear and slow. The system asked for a phone number and didn't add the context that they'd be calling my alternative contact, and I wasn't notified to notify that friend that they were calling. the rep was very kind though!

Confusing to pick up, hard to return due to no parking and road works. A $20 face value rental ended up costing $150

The app wasn't working upon pick up as well as delivery so both times we had to call U-Haul. The uhaul representative was super nice and helpful, but the whole thing on both ends took longer than it should. The guy at the store was not that helpful at all.

I know it wasn't the location managers fault (his personal rating is 5 stars), but the U-HAUL app made for the worst U-Haul experience. Even though we had paid, had the authorized driver present and was on time, the manager would not release the keys to us because there was no button present in the app that we had to press. We were there an extra hour redownloading, closing out and restarting the app, signing out and in, and trying everything to get our rental. Finally, the manager just created a new rental and we were then charged double. We chose in person instead of remote entry with the app because we had problems in the past with the app. And then we still ended up having to use the broken app to try to get the rental. We will never use U-Haul again.

We got our rental truck 2 hours late because the person using it before us returned it late; Then, the clerk at the rental spot said I wasnt verified by uhaul yet to take it; at that point, he told me I needed the credit card I reserved it with-so I drove home to get my credit card and returned (30 min later), and that didnt work; I then called uhal customer support and waited on hold for 20 min before i could talk to someone; by that time, the original reservation had expired and they had to redo the whole thing (and re-verify me, calling 2 people I knew). Finally, 2 hrs later, its pitch black outside and I had to move all of my stuff in the dark to stay on my moving timeline. Totally awful customer support all around and makes me never want to rent there again. One of the most annoying things was the online rental verification process where they need phone numbers of 2 people I know to confirm my identity--but it never said on the uhaul website that uhaul was going to call those people right away, so I wasnt able to give them a heads up and they missed the calls the first time. The app/website needs to be more clear. This is way more inconvenient than if I had just gone to a uhaul rental hub. I would love a refund but I emailed and called in a complaint and havent heard back yet so here I am complaining about my complaint....Anyhow, I will discourage friends from using this service.

With your being so close to my home the whole experience was so easy and un-complicated. Employee was great. Thank-you,

the whole self service pickup is horribly set up. 1. there is no description that it's best to have the same person listed to pay and be the primary driver 2. I was on hold with customer service for an hour, because the self pickup was not working for me 3. by the time customer service returned my call, I had already cancelled my reservation and reserved another

Hi there, (Contract 23999321) I had a confirmed 8:30am mobile pick up appointment but when I showed up at the location at 8:30am, I was given the error message "Your appointment will be in-person. You have to wait until 11am when this location opens". I called Uhaul customer service but had to wait 30 minutes and luckily the store owner showed up at 9am so I hung up. He then called Uhaul franchise service number but it still took until 9:45am for the issue to be fully resolved. So I ended up losing 1 hour and 15 minutes thanks to Uhaul's technical shortcomings. I also received a bill with a $25 CDW charge (which I never signed up for since I have my own insurance and also coverage through credit cards) My overall experience was terrible. I wasted over an hour and had to make new arrangements with the storage company and my landlord. Please address my issues asap. Sal (646) 309-5823 (Contract 23999321)

Did not know for sure that it was the location, random market on a corner in the city, but they were nice and processed the return and got me on my way.

The man behind the counter was so kind. I had a bunch of questions and he was incredible. I would recommend this location to anyone.

The people at the market were very nice and helpful. I would do it again in a heartbeat.

This is a corner store with no parking lot, metered street parking and no key drop. Not sure why it is listed as a 24/7 drop off location. Had to call u-haul 1-800 number at 3 AM for help with returning the key. (The support agent was fantastic!!)

The process and app are flawed. I was told to arrive early because the process could take 10 minutes. It took 45. The majority of that time was waiting for the person on the app to validate my information and call my alternate contact. Returning the vehicle was even worse. Street parking in San Francisco is impossible and even worse when trying to park an extra long van. Once I found parking, the app did not tell me where to return the key! Once I got a person on customer service, she told me to drop the key off at a lock box or mail slot that did not exist on this little mom-and-pop corner store. I kept asking if I should put the key back in the same lock box and she kept telling me no. I had to wait 20 minutes before I finally put the key in the lock box. However, I had my wife film me doing it because there was still the implication I could be liable if the truck key was not returned properly. Very poor app experience followed by a poor customer service experience. I will not be using 24/37 ride share or the app again. Fail!

The process for getting the car was way too long. Only when I was on-site and ready to pick up the vehicle did I have to go through the full approval process, which was very difficult to do via my phone. It took 30 minutes just to get to the point where I could actually access the car. This is much longer than other ride-sharing apps, meaning I will likely use another app in the future.

The Uhaul online verification did not work for me when I tried to pick up my rental, so I was grateful that this location had people around to help. During pick up the Stewarts market employee behind the counter was very helpful. This location uses street parking to store the vehicles, so to get the van I had to carefully maneuver between two tightly parked cars. Upon returning, the online information only said I had to park in a legal spot (it would be good to know if metered parking is ok), but the guy inside the market told me I needed to park back on the exact street where I picked it up, which meant that I needed to parallel park a 9' van in the middle of a street. I would not recommend this location unless you're feeling very confident in your parallel parking skills and have a friend around to help.

Put rented equipment in the van. Have a parking spot that is dedicated to the van, not street parking.

the vehicle was parked on the street and we had to drive around for over a half hour to find a parking space when we returned it. It had 1/2 empty water bottles and dirty napkins in the cab. The outside was so filthy it was difficult to see out of the window, and almost impossible to discern between damaged spots and caked on dirt. The online reservation express pick up did not allow me to confirm a location, and took us 1t least 35 minutes to navigate the pick-up

The van I ordered was not there when I arrived at my designated time (confirmation number: 27620223 at 9:30am). Thankfully, the convenience store was open so that the cashier could help me and told me that I needed to re-order another one of the trucks that was available. However, I would have had no idea what to do if no one was available and it the app did a bad job of explaining what the process would have been if I were to pick up the truck at a time where the store was closed.

I needed a code for key...not told on phone, but attendant fixed it!

Very RUDE at Stewart's market. Difficult to return the vehicle, since there isn't a parking lot at Stewart's Market. We were told when we return the vehicle, to find parking in the area and just bring back the key to Stewart's Market, which we did. But then we were told â€œGo get the car and bring it here and park illegallyâ€ so they can read the mileage and speedometer l. When I told them those weren't the instructions we were given, they got MAD! Didn't say Hello, didn't say Thank You, nothing, just â€œsign the contractâ€, and later â€œhere's your invoiceâ€. I will never rent from U-Haul at that location ever again, nor recommend anyone to that location EVER!!

Hi, After trying to check in through the app, I did it through the merchant. I picked up the van at 3/8 tank I dropped it off at 3/8 tank He argued with me saying that it's not 3/8 then charged me gas. I want my money back.

There's no guaranteed parking on return which is a huge issue. You need a reserved space just for U Haul. City parking is a challenge. When I reserved I said I would return at 9:00pm. I am a woman and that location is "questionable". I am shocked you would allow a 9pm return with no guaranteed parking. The pick up process took over 45 minutes due to the app having issues, which caused delay with my other vendors costing me more money in delayed time due to U Hauls system not working on pick up. NOT SATISFIED.

The store owner was incredibly helpful, they let me know that I could park my car in the spot where the U-Haul was so I didn't have to worry about where to park my car or where to return the van to as well. The steps on the check in take a while to load but were not unreasonable steps to go through. I was unable to send a picture of the before gas level which actually was at Â½ and not 9/16 but since we only drove 2 miles total and the gas fee was $4 it was not a problem or a big deal at all. Please pass along my thanks to the store owner for their help before and with returning the van. Thank you!

Could of care less if they had your business