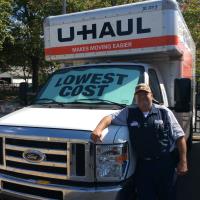 Everything about the truck was fine except after parking it when finished I noticed a large gas leak. I'd just put $20 of gas in since the meter didn't match what was supposed to be in there. I'd driven it maybe 5 miles and it said I needed to refill 1/2 a tank. There was a gas smell I noticed at my first stop but didn't see moisture and assumed it was coming from the auto shop across the street. I rent a truck from this location often and this is the only truck issue I've ever had.

Sam Ribaudo runs a tight ship. He is always friendly and professional. He has helped me in the past with referrals for services that he could not provide.

The location wasn't that bad but online reservation and customer service sucks.

I was just curious why there was $90somethin takin out of my PNC account when it was supposed to be $20somethin ??? Is there a certain amount taken out as a "hold" or somethin?

Truck was dirty when I picked it up, drove strange and the box had something stained on the floor. Avoided putting anything in that area of the box.

It was difficult to get the trailer out of the parking spot. We literally had to muscle it into position to connect it to my truck.

My rental truck broke down less than one hour after pick up.

Process could be a lil easier for first time users

My South city Uhaul was wonderful.

Everything was perfect. I was very nervous and annoying and everyone I interacted with at Ribaudos Auto Repair was polite and professional.

The turn signals did not turn off after any turn. There was a noise (jingling metal) that came from the the front when turning full left and right while backing up. Not sure if it was also there when driving forward. The truck was clean when I picked it up and the transaction was smooth and friendly. Very pleased with this rental.

Your U-Haul account/pick-up system is the most frustrating thing I know. You NEVER give em a code that works so I am officially signed up. I cannot log in....EVER. I rent a truck about once a month and therefor must do so with a live person. If Sam is on vacation from this pick up location I'm screwed.

Facility was supposed to be open until 8pm, got there around 5:30 business was closed and the drop box wouldn't lock. Business in a not so good neighborhood so didn't want to leave keys unattended. Called 1800 Uhaul to get assistance where they got ahold of the owner and finally was able to drop keys.

Sam at Ribaudo's has always been so easy to work with. I'd call him a day or two before I want to use the truck and he had it ready for me when I came in....NO hassles. I DO NOT like the new online rental system. I tried several times over several days to order, pick up and return a truck via online. The system refuses to acknowledge my email. The only way I was able to accomplish the rental was to call someone from UHaul directly; they had to input all the information for me. I rent one of these trucks regularly and if this is what I have to do every time, I'll rent from another company.

I return the truck before the office closed and there was no one there. I didn't know how much they charged my card for anything cause there no one there to help. When I purchased truck instead of the guy walking out with us and guiding us to the right direction he just handed us the keys and said its the truck at end by gate lol how professional. I'll take my money somewhere else and I'll never be back!

Sam Ribaudo is the friendliest U-Haul representative that I have ever dealt with.

The gentleman working the office cussed the entire time I was there getting the reservation. I'm talking F word after F word. I needed more time than a strict 24 hour period, which the other location I got my first truck at worked with me on. He didn't. Then he gave me the wrong key.

The guy was very rude. I will never return to the location. I will stick pay more at Penske versus cheaper or close to the same price for some one to lack customer service and show value with me doing business with them.

The owner of the facility actually berated me for not using the U-haul insurance. I told him I was not interested, and he still went on about how bad an idea it was. He asked if I wanted to take pictures of the vehicle before I left, constantly telling me that I was going to have an accident and would have to pay thousands of dollars to him. He also went on to some length about cleaning out the truck when I was done, and when we got the truck to our location, found considerable dirt in the back end, causing US to have to clean it out. Finally, when I returned the truck, there was no one to check it in. Employees took my keys, but said they were not authorized to check the truck in. They said it would be checked in the next day when the owner returned back to work. That leaves the possibility that someone ELSE could use the truck, damage it, and they could try to collect from me. I will not be back to this facility.

Nothing everything went wonderfully!

the men could not have been friendlier or more helpful

Everything went very smoothly. If you need a U-Haul trailer on the south side of St. Louis this is the place to go.