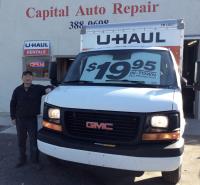 First i went to the 1650 el camino Sacramento location for u hual the fucking lady who reserved the truck for me she was so rude and she didn't know how to behave with customers and she doesn't know any thing about customer service. I hate her.

WONDERFUL MAN AT THE RENTAL PLACE

The owner of the business was very kind during my stressful move, dealing with the company. I would not recommend the location ONLY because it was not close to my home. To headquarters, not the local owner...The rate of the truck rental had increased. And, it is ridiculous that a person has to drive 10.5 miles to pick up a rental when at least 5-6 locations are closer. This is after calling and requesting a closer location but being denied.

Appointment was at 9:30am, I arrived on time and the shop was closed, even though I was told on the phone I was arriving during business hours. There was also no way to pick up the vehicle via mobile phone because of a locked gate, even though I was told on the phone this was an option. Called the shop and he said he'd be there to help me 20 minutes after my scheduled appointment time. Very unprofessional and disorganized. When he arrived, he seemed to have made a completely new reservation as nothing seemed to be on file. We took the time to make an account and add the drivers license info to avoid the wait of doing it in store, so this was confusing. Also, I was told on the phone that a rental fee was the same for 1-24 hours. When I spoke to this shop manager, he said I'd have to return by 6pm because that is when he closed - not trustworthy considering I was given different info on the phone with a uHaul rep. I considered many different options when for renting a moving vehicle, including Budget and Penske, and ultimately settled on uHaul because of its trustworthy reputation. After this experience I will be using another company.

There was some kind of grease or something all over bed of the truck that got on the furniture we were moving and then got on our clients carpet which we now have to pay for. Approximately $200

The drop off location was in a very scary neighborhood. Couch on fire in the middle of the street and cops all over. We were told to drop it off at 9am but no one was at the location, We waited an hour and no one ever came. We left the vehicle, after calling the 1800, not feeling it was safe to leave it. Not sure what was going on at the return location but it for sure was not a safe feeling leaving the truck on the side of the road in that neighborhood

Confirmed a truck for 9:00 am online. When I got my confirmation it was for 9:30. The owner of the pick up site did not show up until 10. Took him 15 minutes to rent me a dolly and he did two authorizations on my CC for first the rental then the second for the rental + the dolly. Meanwhile I have two guys at 20 per hr waiting to work costing 60 for this bozo mistake.

The man's computer system didn't work causing a delay in my rental. He was late opening the next day causing even more of a delay. He doesn't value customer service.

Dirty ass truck spit out bugs when ac came on

nothing!!!stick to giving great service as you did with me...thank you

I made a reservation for a specific location a month before moving, and the day before moving I was told my truck was not available at my chosen location, causing me to have to take an extra Uber out of my way. When I got to this place which was wrong on the Uber maps, the one guy at this place pulled up at the same time as me, didn't have any supplies that I had chosen, didn't have any info and then told me to go take the truck to an actual uhaul stop even further out of my way, to get them which I did not have time to do. The inside of the truck was so sticky and dirty I had to go back in and ask the guy for wipes which I had to clean out the inside and cup holders full of grime and gross stickyness myself, We were frustrated and grossed out at that point gagging cleaning some one else's mess..why not just provide a clean truck at the right place for us? You can't go out of your way but I have to go out of my way and pay more for extra b.s, moving is stressful enough. Just make the small print bigger then so I don't have to be surprised by the lack of effort.

The owner was 40 min late to opening the location and checking out the truck. The truck had to be jumpstarted. The equipment was unswepped in the back. The Battery died and we had to fix it ourselves.

This clerk made me wait in complete silence for 10 minutes prior to recieving paperwork for my pick up. Then he proceeded by asking me to sign paperwork without allowing me to inspect the truck. I then requested the inspection paperwork He then promptly gave me the forms. During the self inspection I found many scratches and dings that were not marked with the usual x stitcher thing. Very disappointed with this series service, I will stick to going to actual uhaul locations. At first I thought this would be great because it's a lot closer than the actual U-Haul establishment. But the service is not as good as regular U-Haul

Songh, the owner, was efficient and courteous- and reminded me I'd left my cap and a padlock key in the truck. I'd go out of my way to rent from this guy. A+

Song very attentive and helpful. Outside rear tyre was flat, Song Pumped tyre up, which fixed the problem. There was no dolly on rental, but fortunately, that was not an issue. Very satisfied. Thank You. TomP.

The worker was nice and friendly but he told me I could turn the uhaul in at any uhaul location and that turned out to be false and really ruined my night and experience.

Things we're not done according to the order had to go out why are the truck myself picked up the ball for the trailer hitch pull the trailer out from behind pile of lumber and install would never recommend U-Haul to anyone.

First I made the reservation for 8 am and i had mi day planned to move from Sacramento to San Francisco, i woke up and there was a notification that the place didn't open until 9:30, i called the place and nobody answered, after a couple minutes, the person in charge the location called me back to confirm the reservation, so i was good so far, it gave me more time to prepare everything before i get the truck. Then it was time to pick up the truck, so i got art the place at exactly 9:30am. The pace was still closed, so i called the guy and he only said he was on his way, so i waited in my car for another 25 minutes. Tyre guy finally showed up and he took forever to park his car, open the place, he was moving garbage and stuff instead of apologizing (at least) for being late and keep me waiting, and there I was again just waiting until he decided to notice i was running out of patience, it took me an hour and a half to get out of there with the truck that was all dirty because it was probably sited outside for a while. And when I got at tree gas station, i got a call from the guy... he forgot my dolly. It was almost 11am and I wasn't even at home. I got stuck in traffic forever because you guys ruined my day. Worst moving ever, thank you so much. I will never come back

This location was a auto shop and I would never recommend this location to any of my friends, the gentleman helping was friendly though.

Closed on the return day, we were told to return @ main depot NOT! Depot wanted $100 fee. 2 hours wasted. Dropped the van @ the pickup place (closed) returned the next day to collect deposit.

I was very disappointed with service I recieved from this U-Haul location. The truck we recieved was dirty with clothes hangers and with outdoor wood pieces. When we returned the truck the cashier accused of leaving the truck dirty and ordered us to sweep out the truck, when we returned it in the condition we recieved it. We also returned the truck with the exact amount of gas we recieved it with and the cashier claimed we had a full tank of gas when in fact the gas gauge was not at the full line. I am very upset with this service. I will not rent a U-Haul ever again. We even returned the truck two hours before it was due. I will tell all my friends and family about the service I recieved from this location and I will not recommend this location for any U-Haul rentals. I know a lot of people because I am in customer service and I would not treat people the way the cashier's helper treated us by forcing us to grab a broom and demanding we sweep out a mess we did not make. I would recommend they inspect their truck more thouroughly.

Explain clearly where the return will be

great customer service will like to use this site in the future. the people were very nice