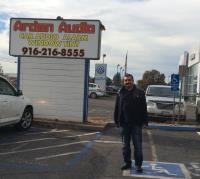 Hard to tell it was a Uhaul drop off. No signage except a small sticker on bottom of door with tons of other stickers. But it worked!

excpet for one Uhaul sticker at the bottom coner of the door, there is no indication this is a valid drop off point for Uhaul. There was plenty of room to leave the trailer.

On Wednesday, May 20th U-Haul sent me a text message thanking me for choosing them for my moving needs. I made 7 calls to the location (Arden Audio/2735 Arden Way, Sacramento, CA) to advise them that I never made a reservation for a truck and that I was apparently the victim of identity theft! They were of no assistance and gave me 4 different numbers to call. I telephoned the police, sheriff, and the CHP. After placing another 10 calls to the location, "Nick" (or whatever his real name is) answered and promised to call me back in 20 minutes. That never happened. I called back an hour later from a different number, he answered again and promised to call me back in an hour. That never happened. I called 15 times to attempt to speak to someone before the truck was returned, which was due in at 3:30. No answer. I sent someone over to investigate for me (currently, I am not in California) and the truck rolled in at 3:30 with the identity thieves in tow, who immediately left the truck and hopped into a white van and fled the parking lot. I finally spoke to Nick and he proceeded to tell me the truck was returned promptly, no damage and that person who returned the truck was a "very nice" man. You think so! Are you kidding me right now! They STOLE my identity! Word of advice, stay away from this place! This is not over yet! This location should be investigated! Skulduggery is running rampant at this location. Stay Away!

Great service! Keep it up!

Very friendly employee helped me but the truck's gas tank was almost empty so I had to go fill it up almost immediately. They had originally marked down that the tank was half full and wrote in an update when they saw that it was almost empty. When I went to drop the truck off they had apparently not sent the update over and I was almost charged for not filling the tank halfway.

At this point, I won't recommend U-Haul to a friend. I made a reservation online â€” weeks in advance â€” for a truck, an appliance dolly, and furniture pads. We arrived at the reservation time and discovered they didn't open for another hour... we waited. Then, the store operator let us know he didn't have an appliance dolly nor furniture pads. I called the toll free number to find out where I could find an appliance dolly, the representative behaved as though I shouldn't be surprised the operator didn't have what I reserved and referred me to one of two â€œnearbyâ€ locations. An appropriate response would have been for someone to deliver the items to where they were supposed to be in the first place. Ultimately, I understand that things happen. However, if the website is able to receive and confirm reservations for satellite locations, there should be some effort made to ensure the items are 1. available, 2. at the agreed upon location, and/or 3. establish better customer service policies that empower employees to resolve issues quickly.

No gas cap on truck & back sliding door was extremely difficult to close tailgate. So the items could stay secure in the truck. Had to leave back open about 8 inches & secure a lock to the ramp handle. A ratchet maneuver, but we managed. Old outdated truck but it was the last one in the city we could find, it got the job done I guess, I'm thankful...

Please keep the cars clean and take them for check up, because they are to old and need sharks!

Sketchy area and the truck didn't have a gas cap. I also had another reservation that when I showed up, there was no truck available.

Signage at road so we know where it is.CLEAN trucks,ours was filthy

gas cap missing and tank empty. attendant said happens often..if left there overnight..and if wanted to avoid possible 8am problem pick up 12hrs early. Even showed me night video of visitors? OK. so tank was already drained. Had to go right to gas station and fill up.. provided gas cap off my 2016 GMC truck.. to complete timely move of student into dorm. Ouch! This pick/drop difficult.. facility not open until 10:30 am.

First - this location is not good at answering their phone. Then when they do, they are unprofessional. For example, I was sent a text saying I should call to confirm the rental pickup day/time and when I did they acted like they didn't even know what I was talking about. And they don't even identify themselves as u haul so I wasn't even sure who I was talking to Second - they didn't have the equipment pulled out and ready to go; we had to wait around for them to pull it out, unhook it, etc The actual person who checked us out was fine, but they need to significantly improve their communication and preparation for pickup

The truck Had an empty gas tank, broken glass inside the back, and I didn't get all of the furniture blankets I was supposed to. I was compensated for both the gas and the blankets but it was extremely inconvenient

The employee overthere (he said his name is Nick) is really bad behave person. I hope God helps him to become a well-behave person. Regards Ahmad

Service was terrible, the owner had the worst customer service, the U haul truck had no gas and couldn't get anyone to bring us gas out. So we had to take three trips using a 1 -gal can to get the truck started, then the truck battery was dead. We were not attended to the owner told us to call the main U haul number to discuss issues. He was a total jerk. After having a conversation with a rep from U - haul we were told we was going to get credit for extra miles due to the 2 hour delay and inconvenience which did not happen. After over 30 minutes on the phone u-haul agreed to credit us $50 dollars this entire ordeal was the worst ever. I will not recommend anyone to this location ever, worst experience ever.

Scheduled the truck for a pickup at 9:30 through the Truck Share 24/7 program. The truck was not properly staged and as a result I had to wait for an hour to pick up the truck. The first customer service person I talked to was rude and blamed me for not arriving on time to pick up the truck (I was on time). When I attempted to fill up the truck with fuel, instead of filling the tank, the fuel poured out of the underside of the truck. Over all this was a deeply unsatisfactory experience and I was rented potentially dangerous equipment. If I have an option for my next move, I will not be using uHaul.

U-Haul is a secondary business. Not much effort put in on it.

Ok location not the best but they did help me with the turn in.

The uhaul was clean but the customer service was not so great. The employees weren't personable.

Never refunded as promised. Truck was not available at 2 locations had confirmation for. Had to pay movers extra hours for the 4.5 hour delay. On drop off they were going to charge over 100k for mileage because it was in system incorrectly causing distress and further delay. Still no refund to date.