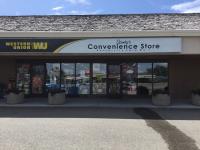 I was charged for one day extra .

They didn't know what was going on sent me somewhere else then after going to another location found out that this was the right location in the first place so Spunky's set me back by a day for moving and I lost my movers so had to find people to help because of Spunky's mistake! Not impressed at all with the lack of communication from this place and uhaul at all!

It took a very long time to complete the transaction as the rep stopped frequently to assist other customers. The return procedure was not explained to me which wasted time upon my return. Recommendation: After hours verification process should be explained to all clients.

All went well as expected

Be honest and tell the customer what he is paying in front and tour contract must follow what you tell not you tell something and then write something else, we don't read because we trust

Location was convenient, and staff were helpful and informative, but the computer kept crashing while we were trying to get the keys.

The truck was terrible it was so dirty there was receipts from pst customers and had not been cleaned in a long time , windows were covered in bug guts which made it very difficult to see out the windows. The lock on the gate is compromised, you cannot lock it securely. The dealers gave very little information about the rental and process. The process took a long time because the dealer was going between serving myself and other costumer s in the convenient store while taking on the phone. The lack of mechanical maintenance on the truck made me fell very unsure about my safety while driving the trunk. This is not the type service I would expect from U haul. I have used your company in the past from other locations and was pleased with the services. This location is completely subpar for your company.

It took me more than one hour to pick up the truck, even though I had checked in online the day before. The people in front of the computer couldn't do what was needed to give me the keys until the called some support on the phone that the opened the rental contract and then send it to the store to have it printed for me. When returning the truck in the afternoon, even though I was returning with the same amount of fuel that was when I got it in the morning, they wanted to charge me 9.8 litres of gas. Wow, I used to truck for 26Km and they were wanting to charge me 9.8 litres. Or this truck had the worst mpg ever or they were thinking that I am dumb. I don't recommend.

I filled my tank to 3/8's of a tank and was only given credit for filling up to 1/4. I realize this is nit picking a little bit but it seems odd and unnecessary that I would have to pay extra for gas that I am not using.

All equipments were dirty before also charged extra really frustrating

Was a bit better of a location

I had an unbelievable uhaul journey... Started at snow hut in Moose Jaw where they asked for a $60. deposit even though I was to pick up the trailer 2 days from then in Regina from uhaul. I stood at that counter for an hour because that $60 was supposed to be taken there and not in Moose Jaw. So they had to cancel it and couldn't return my $60 they had to send it in the mail (which I still have not recieved and was the last of my money so I had to leave the last load of my families belongings since I didn't have the gas money to go back and get it which made the landlord keep the deposit because he had to pay someone else to haul it to the DUMP!) when they redid my application I had to give them $60 which put me out $120. in total! And then they sent me to Spunkys Confectionaries to pick it up I don't get why they couldn't just give me the trailer they were going to at the first place. My family has lost so much with this move and I will be going elsewhere next time!

nothing I can think of

The people were not ready for the customer. They had a lot of problems. I was shocked how poor the quality of service was. I would use U-Haul again but hope don't ever have to use that location again and go through same experience.

The guy at the pickup was clueless about trailers, I bet he never pulled anything before. U haul dealers should have a little more knowage about what trailers, trucks, hitches.

The service was terrible. If I was U-Haul I would be embarrassed to have him as a operator. When the Regional Office advised me that my order was split and I had to use this location, I knew it was bad news. The operator suggested that I fill in the information before going to speed up the process. It took me 45 minutes to get the truck the Owner and his son could not operate the computer. Lucky for me a Supervisor out of WPG for U-Haul just happened to stop by to see how they were doing. In less than 5 minutes he had us on our way. I have no way to re-coup my lost time...very frustrating. You seriously need to review this operation.

Try an have your servers for the orders faster

I did not receive the dolly that I requested and paid for nor did I receive all the furniture blankets that I requested. There were 4 blankets in the back of the van that were wet and stinky. We had to drive to another location to see if they had any blankets (which they did) but was a real time waster.

It was probably not the fault of the employees at the location. But my check-in lasted more than 20 minutes, and this after I had done the online check-in "to speed up the check-in process and not exchange personal information at location". The employees had to input my driver's license and credit card again, and had to spend long minutes trying to get hold of someone from UHaul to solve some issue with my reservation.

This is a sideline for this operation and they must (understandably) tend to other customers as they complete the paperwork. They tried very hard to make this work but it was a clunky transaction.