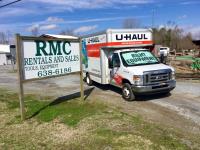 The gentleman was nice but had a lot of problems with his computer making it take sooo long to finish up my paperwork which I checked in and called before I came by. So not sure what the problem was there. Otherwise, he was very helpful and helped me get the trailer on my car in pouring down soaking rain. Very grateful for that. Because it was raining so much there were big puddles in the storage area where the trailers were stored. This is out in a country area so I am sure it's difficult to maintain the lots where the trailers are stored for drop off and pick up.

Gentleman that waited on me was excellent to deal with. Insured all was right and that I was satisfied before I left with trailer.

I will never rent from uhaul again. And will never recommend uhaul to anyone. None of the employees know what they are doing. They all tell you different information and make promises they don't keep. I was promised a free day for all my troubles and then never received it. The companies customer service department has an excuse for everything. Along with reason for why they don't have to keep up their end of the deal. Terrible company!

When the Truck was not at the Ace Store a phone call would have been nice , do like getting there and finding out about the truck being at another location! But it worked out! ????would recommend again!

I was charged for extra mileage on a one way trip. The uhaul wasn't used for any other trip or purpose than the two addresses that were put in the system. I won't be using uhaul again.

U-Haul Contract 27298841 I just wanted to say, hands down this was the worst experience with uhual I have ever had. Our family has used uhual my entire life and so have I. When I called to make my reservation the girl on the phone gave me prices for a 15-17 foot truck and a 20 ft truck. This girl was at the clarksville location we returned the uhual too. I told her I would like the 15-17 foot truck which every one she would have available for me to pick up since my reservation was the following day. We did the express check in and it was only supposed to take 30 minutes too to check in and our uhual was supposed to be available at 8:30. It took over a hour and a half to check in and get our uhual. We did not get the 15 or 17 foot truck we were promised. We were given a 10 foot truck and still charged the same price. The man who helped us was nothing but rude to us as well. Due to us driving from fort campbell Kentucky to Alabama to get our belongings in Alabama to bring back up here and only being allotted 241 miles we had to find someone in Alabama with a truck to help us move the rest of our items because they had to be moved that day. We ended up having to pay another $250 to have someone help us move by using their truck all due to uhual being unable to provide us with the truck we requested. Not only due to the truck not being available and us having to pay someone we were only able to use the truck less than 24 hours. The truck was returned to the lot in clarksville after hours the same day it was rented. I am so upset by the negative experience I have had. We are military, I'm nine months pregnant and the stress your company has put on m family while my husband is deployed is beyond ridiculous. Uhual used to have such a amazing name and company and people working for you. I can not believe how you treat your customers now a days. Signed a very upset faithful long term used to be customer.

Very nice trailer but we wanted a 4x8 trailer in my reservation but received 5x8. we dealt with it. 4x8 wouldve but nice to have.

Everything went flawless with the automobile transport I rented. Wonderful experience, I won't hesitate if I need to use again.

The guy that we turned the truck into was awesome. He actually took the time and Effort to help us out

Could not find the address because it is covered up by an awning. Cannot be seen from the highway. Only 2 small U-Haul signs in front of store. No U-Haul trailors, trucks, or anything in front of the store which customers look for when trying to find a location. The 2 signs are so small they are horrible in terms of seeing from the highway. A awful location. This trailor was suppose to have been delivered to Fort Payne, AL (16 miles round trip---close to our hotel); yet no person would go and get the trailor. Awful customer service. When we returned the unit in Augusta, GA, the personal at this location said they always go and pick up a trailor for a customer. This U-Haul rental location needs to be closed DOWN!!!!! Plus, the trailor was sitting in a mud bowl in a side area. The tenant on duty wanted me to back into this mud hole to hook onto the trailor. I refused to back into the mud hole. I had to tell him two times that I was not pulling my truck into the mud. He took a tractor to pull it out for hook on.

My only complaint which I also made via phone prior to pick up date is that this location was not in my town where I wanted it reserved., where there are two locations. I feel I was scheduled to pick up in this location to increase my cost of rental by adding on extra mileage. If I use uhaul in the future I will make sure this does not happen again. It was unfair to me to pay the extra mileage.

Was automatically enrolled in the insurance without being asked if I wanted it and I couldn't get it refunded. The truck was in bad repair and should not have be on the road. Crack in windshield in front of driver, mileage not up to the 10 mpg and problems with the steering.

no need for improvement

let them know in initial conversation there are hidden or nondisclosed charges that are only revealed when equipment is about to be picked up for use.

Out standing service the best our had in a long time

I wrote that the personnel weren't helpful, because it was Sunday and no one was there to help. But I had been told that it was a secure place to drop off my trailer even after the place was closed...but it didn't seem like a secure place. I couldn't call anyone, and so I went and bought a padlock and chained the trailer to a fence so no one could steal it. When I piced up my padlock this morning, the person working there seemed kind of put out by the fact that I did that. He said I was the only one who ever did that. I told him that it didn't seem safe just to leave it sitting unsecure by the road...he said the odds were 1 in a thousand that someone would steal it...I said I didn't want to be that one time when someone did, because I would have had to pay for it...I would say that if they are going to have a place where you can drop off your vehicles during hours they are closed, they should have some way to secure the rentals...

I was charged a fee for fill-up despite the fact I returned the fuel level to the same as when I acquired the vehicle.

Let people know you have to pay up front kind of grouchy, not very inviting