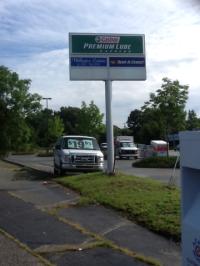 Aside from the front floor being slightly dirty , everything else was perfect. Service was great , truck ran and handled better than I expected.

I checked in online ahead of time to save time but it still took a while at the counter. The guy was NOT WEARING A MASK

Great experience. Everything was as expected and worked out great.

A lot of the same things others have said about DKC Auto Repair and Lube. Nobody at the location was wearing masks. The location didn't have some of the equipment on my order, and didn't tell me that until I arrived to pick up the vehicle. There was no sanitation of the vehicle; the vehicle smelled like someone had lived in it. I came back to return the vehicle prior to the location's listed closing time, and nobody was there. The after hours key drop was hard to find.

I would never rent again when the location is closed. It took longer than it should have to check in, then we couldn't find the truck because it was parked separately from the others. Once we found it, i had to re-do some of the steps because I had clicked that I couldn't find it, then I had to walk back to the building to get the keys. It was just a longer process than what it would have been if the location had been open.

Not sure truck was wiped down in light of covid 19.

I had booked a uhaul from Worcester St Southbridge MA. $71.30 was they apparent cost of what was given. The bill didn't come to that it cost $52.51. I called on or about 8/24/20, about the refund of $18.79. I have yet to receive it. It's now been about a month. Also, at the end of August. I used the same place again, I called to confirm that I would be about 5 minutes late at 11:14am. They then told me I didn't have a reservation with them. That I had to go to CT to get the uhail. I was beyond mad at this point. As I had to pay for about 28 + extra miles! I took a screen shot of the conformation that was sent by them in MA. Then they quickly sent another conformation, stating that I had to go to Putnam CT to get the uhaul. I will be calling today, to clear this issue up. I DO NOT recommend using the uhaul in Southbridge MA to anyone! As they mess up and then, if you try to call them back they don't answer the phone! The person in CT was extremely nice and I showed him the screen shots, as proof of what the MA place had done. As he was going to contact uhaul about what they had done. Yet, I've not even heard from U-haul. And STILL have not received any of the $ back that was over charged!

The whole rental process was seamless. Customer service was great. Very adaptable to some minor changes. Uhaul delivered for us

key drop off was hard to find.

My only issue was that I was unable to return the vehicle through my device.. The app could not find my location ( I tried two different cellphones) making impossible to return the truck... I was not charge anything more as a result of that issue.. so, harm done..

Feel like I'm doing the job of and employee

Our only issue was the drop off.. they knew what time we rented the truck for but never mentioned about where to drop the key off ðŸ˜’ there isn't a labeled drop box.. they were closed at the time of drop off. We shoved the key in the garage door. Than never heard back if they received it.. as it would have just been thrown on the floor. That was our only issue.

I requested a hand dolly and furniture mover. When I got there they were unavailable. This put me in a tough position at the last minute. I did not have the required tools which made that day of moving much more difficult.

Make sure dolleys are strapped to inside the trailers

I received a call from UHaul 4 days after I rented the truck asking when I was returning the truck. I said I returned the truck at 1pm on 6/13/20. The returning rental equipment needs improvement.

Make your self return more user friendly. I tried 3 times to use it and all it did was freeze and become unresponsive. I also called the 1-800 number provided and got disconnected twice before reaching someone. I would not recommend this service to anyone

I reserved a 20' truck and when I arrived they only had a 15' truck. Location and staff were clean and friendly. Customers should be notified in advance when equipment is not available A discount should have been given after I received the wrong equipment but nothing was done about that.

Nice people, easy to work with.

This could not have been any more easier than this. Truck was ready and the business was not open yet. I was able to pick up the truck and start my day. Dropping it orr was just as easy. I would recommend this company and use them again

This location fabricated the numbers for mileage and tacked on a $90 fuel charge when the truck was returned with more fuel than it had when I picked it up. When I tried to speak with someone at the location he said "we just put in the numbers". I tried to explain that it appears the numbers were put in incorrectly, but he shrugged and apparently didnt care. I've called Uhaul customer service, and they will follow up, however I will not do business with this location again (for uhaul or their mechanic shop) and will advise others the same