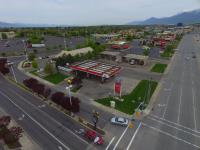 It was weird that you called my emergency contact. Maybe don't do that in the future

Worst service I have ever had. Will never use Uhaul again.

The app didn't work very well and the location seemed kind of sketchy.

Dropped off truck at an old abandoned car wash next to gas station. Easy to get in and out of. Nobody there to answer questions. Worker at gas station didn't know anything. Uhaul gave me a credit to take the truck 15+ miles from my house. Got a call later that I didn't fold up the blankets and I could either drive back and fold them or get charged $20. Overall would have liked better communication than a contract with print that I couldn't read with my eyesight.

The trailer had obvious old damage, but the pictures didn't show the damage. If you are going to the trouble of having me view pictures of the trailer, you should at least post pictures of the known damage. It was ridiculous that I am a verified customer, you had my drivers license and credit card number, and yet you still needed additional assurance that I would return the trailer. So I gave a copy of my military ID, she copied it and uploaded it, and you still needed additional assurance. So I gave the phone number of my son, who doesn't have a penny to his name, and that was good enough.

The female associate that helped us was extremely friendly, knowledgeable and Incredibly helpful. I do not think I have ever had an experience this good with any U-Haul location before.

At pickup, no one had any idea where to begin. After another employee was called to help us, we were able to tow away a 5X8 trailer after a nearly 2-hour wait. It gets better. Upon return, the Phillips 66 employee, Valerie, told us we could not leave the trailer there, because they "don't do that anymore." When we pointed out that we had committed to return the equipment to the same location, she insisted that we take it to the U-Haul location in Provo. We asked if she could call someone, maybe the same person who actually rented us the trailer, at which point she put her palms up and repeated several times that she did not even have a number to call. That, my friends, was not true. U-Haul should sever its relationship with this location immediately.

I did not get a final receipt, it seemed a little haphazard.

This is the first time I rented a truck using the U-Haul Truck Share program. It was very easy, the rental went flawlessly, and I would happily use the program again for the next rental. I especially liked that I could turn in the truck on my schedule.

The contract estimated gallons said 3/4 tank; however, the actual gas indication was slightly less than that; nevertheless the attendant said that's close enough / that's how we estimate, so I didn't worry...

I don't know what happened, but when I tried to drop off the truck, the website kept reloading so I couldn't check the truck back in, it was really frustrating. Eventually I went inside and dropped the key off at the gas station according to the gas station attendant's instructions.

The pickup location was a gas station with a kid coming to meet me. He was late arriving and was not very well organized. This was not the location I had made the reservation through.

Uhaul representative was 30 min late for the scheduled pickup. Worst place to pick up a Uhaul ever. Just use the real Uhaul dealership in Provo and skip out on this poorly run joint.

My rental was not at the correct location. This was annoying.

I got the $14 insurance but was charged for the $28 insurance . We rented the truck for 24 hours , but we received a phone call asking us to bring it back sooner. They told us they would give us $20 off for bringing it back sooner but then charged more for the insurance. It was very annoying and unethical. I will not return to this location .

No one there to help Check out had to wait after they called someone.

The service was excellent>

The truck was dirty inside, cup holders and under the seats.

SUPER helpful personnel. The location isn't much, it's just a car wash, but it works!

Derek was very professional and helpful through the experience. Friendly staff, highly recommend!

I had used express checkout, then waited 10 minutes for some guy to show up only to find that the employee I first talked to could have just handed me the key since I was ready to go. Also I was told originally that I would be contacted the day before pickup but wasn't contacted until the day of and that's when I found that my pickup location was actually 20 minutes further away from my originally selected location.

Nice family owners. Easy to pickup, dolly was available and in good working condition. Easy dropoff with nice conversation with one of the family owners.

The guy who checked out my vehicle failed to put the correct delivery location, which caused me a headache in trying to get it changed.