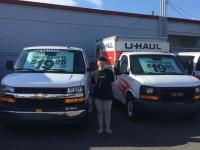 Between the system being down and the employee being incompetent, it took an hour to rent a Uhaul I already placed a reservation on. At one point, the employee realized he gave me the truck before the registration was completed and asked that I return to the location 20min after I had driven off.

It took over 30minutes to check in because the printer was not working for the clerk and the keys were not where they were meant to be for the customer in front. I ended up having to sign on a random piece of paper and did not receive a copy of my contract. The guy working there was trying his best and did a good job, but the circumstances were frustrating. Then once I start loading the truck, I noticed that the moving blankets were all really damp and could not be used. Luckily I had purchased extra blankets, and they were dry, but the ones that came with the truck were wet and gross. Lastly, the latch/bracket keeping the hand truck in place was broken which meant that it could have easily come loose and moved around the cargo area. Those issues were really disappointing and frustrating.

All of the staff were super friendly, accommodating, and thoughtful. One of the best experiences at a u-haul location that I have ever had.

After reserving a 15' truck online and then confirming it on the phone at this location, when I arrived I was told they had no 15' trucks left only 10'. This increased my cost because it took more trips to move. I was also charged for a dolly that I did not rent and when I tried to get it removed from my bill I was told they couldn't do it there and would have to call some number. I would strongly discourage anyone from renting here.

Got charged for blankets that were never provided, rear view mirror a in truck moved with the wind, when I tried to adjust the bill, after about 20 minutes on hold, I was told I had to call someone else.

You charged me for a Dolly I neither rented nor used. Wasnt that Impressed but could not be bothered chasing it up to get my $7 back. The vehicle also only had a quarter tank but I was told it had just under half. It was pretty much dead on quarter.

The truck was beat up. It was the height of the rainy season and the truck leaked everywhere. Boxes of books soaked and destroyed. I was charge for a furniture dolly which was not provided. I was told the truck would be half full of gas, and yet it had less than a quarter in it at rental. I reported all of this to the attendant there and was promised a follow up. But instead I received an invoice from U-Haul charging me for a full tank of gas. I even have photos of everything to show how they cheated me.

I signed up for the mobile check in but had delays in getting the key because the office was closed. It was very unclear what the process was and there was no furniture dolly in the truck reserved even though I paid for it in advance. The driver side window handle was broken and the side mirrors didn't fully adjust.

truck was not cleaned, nor wiped out. We returned it far cleaner than we got it. Returned with fuel above required and was hammered with no fill charge and fuel. Had to go back, attendant said he'd get it corrected and followed up with a call. that was appreciated

It was difficult tg park the 20' truck, but it's always difficult to park those trucks. Thank you for the excellent job of getting me a truck when the truck I had reserved was not returned on time. That was great pro-active customer service.

The van we requested was not there, needed to use a truck instead. Truck was not clean and smelling like marijuana so strongly that our belongings all smelled like weed for a day after unloading. We only had our belonging in the truck for an hour. This was unacceptable.

getting the keys and out the door took a lot longer then expected. putting my info. in the web check in again and wait to be "approved" was slow and inconvenient.

Inside of Van was not clean...I did vacuum back of Van before returning...Van was very easy to drive... Entrance to rental office,very hazardous..large hose and items on ground...other than that... check out service was fast and easy....I have used U-HAUL for many years...my first time at this location...I would most likely use this location again.

The gentelman who helped (10/18/20 9:30am) me was extremely professional and friendly. Would definitely rent here again because of the great service

Representative was not wearing his mask properly. Location is an suit shop and there are a lot of car parts strewn about.

As is so often the case, watch out for hidden fees. Seems to me the mileage got inflated, but I could not find an odometer on the dashboard - it is electronically recorded. Service was OK, but not particularly professional.... It is what it is - truck rental from a gas station. Don't expect too much. My recommendation is neutral, but the truck was new, clean and sanitized as I waited to leave. I'd go back if that was the available option.

They didn't have trollys that I ordered.

The return app sucked, the mileage And gas measured they entered was wrong and the taking a picture didn't work on the app so you couldn't send a picture showing the correct amounts. The app just froze and it wasted my time.

The truck we got had blood on the interior and the drivers side mirror did not stay put had to keep adjusting it. Quite disappointing may look for a different company next time.

I had a couple issues. 1) The Dolly I selected to add was not included because the location didn't have any. 2) Safety coverage was added to my order that I declined in person and online. I sent an email asking for a refund of the $14 safety coverage. If you are able to help I would appreciate it as well. Generally, I have had great experiences with Uhaul but this one was a little tricky.