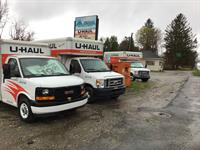 Truck was buried in snow and cargo area was beyond filthy. Looked like someone was hauling soil. My pickup time was 12 noon. Nothing was done to ready the truck for my trip. I was in a hurry due to impending ice storms. Then she gave me my bill at $300 over my quoted price. Took a while to figure out why. But I don't understand why she had made a new reservation instead of using my existing one? Took 45 mins for the truck and paperwork to be ready. Unacceptable

We dropped off on a Sunday, so didn't get to meet personnel. Used the Uhaul web site to self-return. Drop off location was spacious and easy to find.

I made a reservation for the main location at 300 W Housatonic St. for a 10 foot truck My reservation was then moved to this location and also changed to a 15 foot truck I would have liked to have been called and explained the reasons for the change before Showed I at the location. I had to call to confirm the pick up and when I did all they said is a 15 foot truck would be there with not explanation

My overall experience renting a UHaul trailer was positive, but I was very disturbed that one cannot reserve a trailer for pick up at a specific location and be guaranteed that it would be available at that location. My first reservation would have required me to drive over an hour to pick up the trailer! This Pittsfield location however worked out great - and the guy in the office who hooked up my trailer was very helpful!!!

Refer people to a different U Haul location locally

Trailer was not there when I arrived at 9 AM. Dealer called customer who had the trailer and got voice mail. He should have called night before when it hadn't been returned. He sent me to the UHaul down the street. They didn't have one. I called UHaul central. Great guy on the phone found me one but 25 miles away in opposite direction. I decided to go back to Autotech and see if it had arrived. When I returned to Autotech, they said guy would have it back in 20 minutes. 45 minutes later, he showed up. Passenger side light didn't work. I took it anywat.

Rusty equipment should be replaced. Locking mechanism for the hitch was faulty and was very difficult to lock.

This place is filthy, the man who checked me in was rude. Last time I go there!

I WAS CHARGED A CLEANING CHARGE, AND I DIDN'T EVEN USE THE TRUCK. I ENDED UP NOT NEEDING IT AND RETURNING IT IN THE SAME CONDITION IT WAS GIVEN TO ME. I WILL BE DISPUTING THE CHARGE.

For some reason my original reservation was moved from a different location in Pittsfield. I showed up at 8 am to pick up the truck. The person working was not able to help me (and spoke very broken English, so he was hard to understand), so I had to wait for someone else to show up. When they finally straightened the paperwork out, they brought me to the truck. It had a foot of snow on the top of it and was stuck in snow and ice. They did nothing to help me get it out. I ended up being almost an hour late. I also had to take about 45 minutes to clear the snow off the top of the box, because it is a civil offense to drive with snow on a vehicle in Massachusetts. I hope that IF I ever need to rent in Pittsfield again, my reservation will stay in the location that I had contracted with. I don't think it should have been changed, and if it were ever changed to the 1335 W. Housatonic location I would cancel immediately.

You can have the equipment at the original location agreed to. (Cohoes NY) You could also stand behind your guarantee for $50 without the hastle!!!

My reservation sent me to another location to pick up vehicle and caused delay and inconvenienced me. The inside of the windshield was filthy - had obviously not been cleaned which made driving difficult, dangerous and extremely stressful.

Look, this place did the job. It was organized helpful and again made it easy since this was not the original drop spot.

The people were very friendly, but did not even know I had a reservation. The truck was started after they pulled my reservation up to warm, but the snow was not cleaned off the hood and windshield. The wipers were shot and the metal was dragging on the windshield and no wiper fluid. The cardboard sign was left on the seat and the man that brought me out to go over truck had to move it when he got in.

Tell them they will also be charged a whole days insurance for being an hour late.

Owner very rude and truck not quite ready; he didn't want to explain workings of truck; made us feel as if we were bothering him by asking questions. Went to wrong U-Hall store first- up street, not open, large,new, beautiful then figured out different place-Auto Tech-further out of Pittsfield -not explained when made reservation. Man not helpful and down right rude.

I requested the truck pick up for Westfield MA. I was told the day before that I had to drive two hours out of my way to pick up the truck in Pittsfield MA. This was not right. When I got the truck the oil light was on and worried the whole time that the truck my break down. Then I read, after the fact, that there was a temporary repair made to the truck and I acknowledged that the truck my leak...I was never made aware of that verbally, he just made me sign quick and never acknowledged the potential for water damage. I guess I was lucky it was a dry day and night. Lastly, when I called customer service their only response was "I can't do anything" then why have customer service. I had to drive two hours out of my way to pick up a truck I had ordered, didn't get reimbursed for my mileage, drove a truck with the fear of breakdown and got terrible service from UHaul. Oh yeah, when I called the facility where I was going to pick up the truck, as I was told to do by UHaul, the jerk in the phone hung up on me not once, but twice, without me ever being able to ask my question. I will do all I can to never rent from your company ever again and if I can I will tell everyone I know to never use your company.

Loading the car onto the auto transport was difficult (even with the help of an employee) because the ground on the side of the buildings wasn't level. We had success only on the other side of the building (both areas are dirt, not asphalt or cement). However, my car (underside) was already damaged by the time the other side was used as the on-loading location. Also, the franchise owner did not complete my contract correctly (insurance at lower level than requested; no effort to get the right number of the plate of the car (2014 Hyundai Elantra) that was being towed; no indication that my car's road clearance would be insufficient for the auto transport was given when I brought my car in for inspection, as requested in the U-Haul rental requirements; only 1/3 of the truck's left rear light lit up on night or brake use). The trip was safely carried out. The truck performed well. However, the "lips" on the inside of the auto transport ramps (and horizontal platform) are too high for an average sedan. I loaded an empty 2014 Hyundai Elantra 4-door sedan and, at the bend where ramps meet platform, the bottom was ripped/crunched by the inner "lips." Unlike 15 years ago, the auto transports have become heftier, perhaps to accommodate SUVs and pickup trucks. The currently high outer "lips" should guide any tire into alignment, so the inner "lips" do not need to be high and should be lowered. SUGGESTION: Perhaps rubber liners can be provided for sedan loading (or the whole fleet of auto transports need to have their inner ramp & platform "lips" ground down). My insurance claim is pending on this. I was quite dismayed, but under the circumstances/time constraints had to force my car on (the damage already having been done) and back off at the unloading site.

This location's equipment is very old and like driving a tank. Thank goodness I only needed the 15 ft truck for around town! I would have been terrified to go any distance in it! Steering very loose and sloppy, brakes spongy, and shocks shot!

The only issue was when I discovered as I got the truck home and began to load it that the passenger side middle rail inside the truck was broken at the first screw location toward the front of the truck. It didn't affect my move.

Due to traffic, I was 8 min late for my drop off and you charged me a whole additional day. This is ridiculous. I wouldn't mind an extra hour for a smaller price, but a whole day is a ripoff.

1. I was quoted a lower price for mileage over the phone 2. called and talked to uhaul customer service rep who said he couldn't do anything 3. was charged for some gas even though i brought truck back at same gas level Sorry my experience was so bad I will not use uhaul again

My refund hasnt been processed..the agent is unwilling to assist..hes rude.. Im not happy