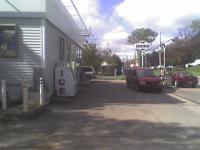 It was a windy afternoon. Leaves were fluttering gracefully along the ground as the gusts pushed us in all directions. We set out north, northwest, the three of us, sitting in a row in the front of the 10ft truck. We shared coffee and stories, as most do on the roads in NS on a Sunday afternoon. We arrived 60-90minutes later. We loaded the truck with various items ranging from rugs, bedside tables, to a unique carving of a seagull that just lost his lunch to a more aggressive seagull. We visited family along the way and talked as much about the things we didn't take as the things we did and the stories that go with each item. You could say it was just a quick trip to grab a couple things but I say, thanks to UHaul, this was a trip of grabbing memories that we'll Cherish forever.

Couldn't offer furniture pads and dolly I rented was not in truck. The fact that gas tank is only half full makes it so difficult to bring it back half full, this is just the stupidest thing ever. And the bitch at the drop off location needs a lesson in customer service.

The U-Haul computer program was down and we had to wait for nearly half an hour before we could leave with the vehicle. Really inconvenient. Apparently computer issues are common. The people working to serve us were very sympathetic and helpful.

the customer service person was excellent. my pickup location was expensive due to the fact that I was being charged per km and my home was 20km away ... therefore i was charged for an extra 40km (which ended up being much more expensive than it had to be) I was also charged 29.99 for my rig and asked for a $19.99 vehicle

Hughie the rep there was very helpful to us when we asked any questions!!!

I booked my uhaul weeks in advance and was told that I had one reserved in New Glasgow. Fast forward to this weekend, I get a call saying I can't get one in New Glasgow, I have to drive 20 minutes to a neighboring town and get one. I was offered 49kms free, and told I could drop it off in new Glasgow instead of going back to the other town. This was an inconvenience but I was fine with it. I go to pick up the truck and the person working (from what I could tell it wasn't her fault, she said she never does uhaul services) had no idea how to get me my truck or which one was mine, made me talk on her phone during a pandemic to her boss, had her fingers in her mouth while she was waiting on me and was well within my personal space multiple times. No social distancing or sanitation what so ever. Once I got the truck I was barely home when I got an email telling me to drop it off at a location way out on the highway, 20 minutes in the other direction from New Glasgow. This wasn't what I was instructed to do on the phone, so I called the place and they also had no idea what was going on. Once the truck was returned (with the same amount of gas in it as when I got it originally, I know the rules) i was emailed a receipt for them charging my credit card for gas for the uhaul. When I had originally picked the truck up from the 1st location no one even checked what was in it. They didn't do the usual walk around or make me sign anything saying what the fuel level was. I'm so unimpressed.

I paid my rental online as I had to get a family member to pick up the keys. The location then charged me insurance which I did not request. I called the 1800 number and no one could change it. It ended up costing me an xtra $40.

Staff was friendly. The back of the truck was clean but the cab was extremely dirty. The cup holders and dashboard were sticky, very gross.

We wanted to rent the truck for one way only and were forced to bring the truck back to the pick up which cost us more money than it should have.

I have used u-haul many times and always easy, friendly, service.

This is a gas station. we were told that gas customers needs take priority, that uhaul company mandates this.our service was interrupted several times as gas clients interrupted our needs. It was clear that our business was not appreciated. on returning the truck, gas station manager was frustrated when trying to calculate kms used(my usage fee was given in kms). In his inadequacy, he attempted to project cause of frustration on me. also, when truck was picked up, staff on duty said she hates uhaul and didnt care where truck was retd....in the ocean would suit her. Pictou County can be rough around the edges. on a positive note, uhaul provides a great service as an unbelievably reasona le cost.We are grateful for this and will continue to access dispite ignorant service delivers.

Door wasn't secure, causing moisture to get into back. Floors, walls, and ceiling had a lot of condensation (could have been environmental conditions, or because door was ajar). Ramp was wet and muddy. Staff was helpful and professional. Location was very convenient.

The drop off location was closed when I arrived at about 8:30 pm (some type of situation has come up) but the location does NOT have a drop box!! Should be standard with this type of transaction.

Place where I got the truck was great but uhaul itself was very poor.. And would never ever tell a friend to use uhaul..

The truck was very dirty inside . We had to sweep it out before we could use it. The dealer didn't seem to care.

Please see my reply to my statement e-mail. What is the environmental fee for? Also the question of the difference in allowable mileage.....46mi.( at pickup point ) as per 118km. initially quoted on my emailed order.

Confirm exactly the fuel level. I had to drive an extra 30 km to get the truck from where it was scheduled for pickup.

I started online, then spoke to some one at Regional Office in Halifax. In renting this truck I did not have a positive experience. The online allowed me to pay, but didn't tell me that there were no vehicles in the town I wanted to pick up in. I spoke to Reg. Office, they again took my credit card info and assured me my driver could pick up the vehicle in a town 45 minutes away with no problem. I then called the pick up location and he said he would need the credit card when the truck was picked up. I told him of my troubles and he took it over the phone. That's 3 times for the credit card. Now onto the drop off location. I had to tell that every step of the way and when I called the Drop off location thay had never heard of me. A lot of calls on my part, I lot of duplicating my information. No one at Uhaul was passing it along.

once i receive a confirmation, I have the understanding that my request is fine. never did i expect to have things change one day prior to pick up of the vehicle. also, multiple pick up locations is not convenient on moving day.

Person on duty was very friendly and helpful. The dolly was not there; however, I was reimbursed the money so I was a satisfied customer. Having to pick up the uhaul in Pictou from New Glasgow was VERY inconvenient. And was very suprised to find out the day before moving that I had to go all the way to Pictou to pick up the uhaul when there are TWO uhaul locations closer to home.