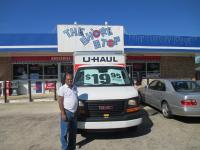 Ensure that additional equipment related to the truck is actually inside the truck. I requested a dolly, was charged for a dolly, NEVER RECEIVED A DOLLY, and then was charged again for not returning the dolly that I never received.

The owner was very nice and walked me through the process...unfortunately, we had to get a different truck from another location because we did not realize the 10 foot trucks did not have a ramp...we were moving a large refrigerator and freezer and were not able to use this truck.

prices are too high.

I have previously used this location before and the gentleman that helped me was super nice and friendly!! Always a pleasure to work with !

I talked to the associate before arrival. Upon arrival he told me that the dolly I requested was not available. Which he could've said on the phone before I got there. He said he would call another location and tell them I was on the way. I got to the second location and there was not a dolly available. The customer service was very poor. I'd never rent from there again!

Nothing needed he was perfect and just in the right place. Will use this location many more times for trailer needs!

This location was not easily accessible for my pick-up preference. Equipment was not ready for pick-up and I was detained longer for the trailer repair, but my pick up time was not changed. I was told that i could have a little extra time upon returning.

Worst customer service and experience. Wouldn't recommend this place to anyone!!!

Great people to help you with a u haul rental.

Very friendly staff willing to help with everything.

The owner of the store is very pleasant to work with. Great service.

I have used uhaul several times. Custom information should saved to a profile. It would make rental a little faster.

Add dolly's to the truck

Improve the customer service at the call center when I called the agent, she showed +1-800-468-4285 no empathy but the location. Made up for it with how professional and personable they were will be recommending this location in the future!

Gentleman was very friendly. I would certainly visit his shop to rent again!!

I checked in online and got the truck which was nice but when I got it the appliance dolly was not available. I had rented the dolly four day prior and paid in full. Clerk was not helpful at all and never got the dolly.

The cashier had to ask my son to get on the computer to help her input data for the transaction as she couldn't figure out how to do it. She also had to make multiple phone calls to her manager to get help. She also told us at the start of our conversation that there would be a dolly or hand truck included with the rental. We didn't find out that there was no dolly until completion of the transaction. I had to go and buy a dolly at the local hardware store. She clearly needs much more training.

I made a reservation about ten days in advance at a location that was closer to my residence. The day of my move, at the time I was supposed to be picking up the truck and after everything had already been planned, I was notified that my reservation had change almost entirely. My truck was a different size and the location was an additional 30 miles (about a 45 minute - hour drive) away in another time zone. This threw off the entire moving plan from the timing to the budget (for additional gas etc). I appreciate that this was an incredibly busy time for uhaul in that area but I feel like if the reservation I made was unavailable I should have been notified in a relatively reasonable time frame so as to plan accordingly.

Originally we were told that we couldn't drop the truck off after we had already spoken to someone that told us we could.

No help was offered with un-hooking or locating trailer and no receipt or confirmation of return was provided. Just told to leave it outside.

It was a little slow confirming everything, even after express login.