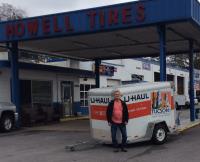 I wasn't happy about the $21.00 "After" hours drop-off fee. I paid for an extra day of service, brought it back early and then got this fee. I have used U-haul several times over the years and never seen this. What is the point in the after hours drop-off box? I would honestly like my $21.00 refunded.

No receipt!!!! I cannot get paid without one. I called about it the day after and they still haven't sent it.

I called Customer Service and reserved a U-Haul Truck at a certain location. I was told that the truck was available at that location. Went to pick up truck and it was not there. I had a limited amount of time. Then was sent to a far away location. I ordered blankets, which were not available at that location. Then had to go to another location. Will never have use U-Haul again. We also filed the tank up to where it was before dropping off and then got charged a 17.17 refueling fee. This was a scam. U-haul is a horrible company. Also, personnel are not well trained. Never again.

Dolly right light and fender was damaged. No other dollies available. I used magnetic tow lights anyways, but the dolly should have been in better condition.

Answer your phone's. Never could reach a single person on phone. Had to physically go and reservation was a disaster. Terrible terrible customer service.

I ordered 10 of the moving mats and the guy who signed me out said he had none. I was breaking down a sunroom and transporting it 60 miles with no protection. I was pretty concerned leaving for the job. So you'll understand my frustration when we arrived home I had 1 big window, 1 of the smaller windows and a skylight shattered. I believe having the order correct would of drastically reduced potential damage. My experience not great and prolly out atleast 400$. I did think I ordered an accidental protection??

Equipment was not ready. The truck was not clean or ready for rental

Site was open but rep was not there. One of Dave's employees was helpful though. Check in process was difficult. Order not associated with account. Not intuitive with dropping off at different location. Constant answer questions take picture answer questions take another picture. Called and cust serv, tech support, and dispatch was very helpful... but why 3?

Experience would have been better had the website worked. What should have taken 5 mins took almost an hour dealing with the website. Overall very aggravating reservation.

My experience with this company was the best ever!!! Thanks ?? Quincy

No paper contract. Took 15 minutes to get everything done when I had a reservation

Emailed receipt took over a week to get and when I received the receipt it was a $0 receipt. This was a business expense and I needed a dollar amount I paid on the receipt for expense purposes. I called and emailed but had no luck getting the receipt I needed.

Not all people have the luxury to check in via phone or can return during business hours. This rental from the start was a BIG HEADACHE. I had to call numerous times to get this rental and to check it in like I told at least five customer service representatives I will not use U-haul in July when I move. Thank heavens for David Howell's tires for assisting me w check in because my the fifth call I was upset.

Poor service, poor attitude and overcharged. Had done some research before renting a unit in Pensacola and purposely avoided this place because of bad ratings. Was discouraging to arrive in town and learn my order had been switch to this place without me knowing. Equally discouraging to see all the negative rating were true.

I will not go back to Dave Howell Tires to rent any Uhaul. I had my contract, cue led in and still had to wait nearly 30 minutes because they did not have my information. They asked of I wanted the Insurance, and I said No, but they still charged me for Insurance. Too bad because they are close to my residence. I will be better off driving past them to rent at a different location.

I rented a trailer and everything was good until I tried returning it. The location never checked the unit back in so i received a email from Uhaul then when I worked through that, I was charged an extra $15.00 for cleaning. Not sure how they knew it was dirty when they didn't even know it was returned and for the record, it was cleaner than when I picked it up. Lesson Learned!

Checked in the trailer a day early and asked for a receipt and they said I would get one via email. Two days later Uhaul sent me an email asking where their trailer was. Dave Howell Tire's had not completed the paperwork so no one knew it was on site until UHaul called and so did I. They then checked it in and all was good. I read in line in their reviews that this had happened with them before. Just do your job and enter the info in the computer.

I dropped off this vehicle and another one and a tow dolly on 2/13 at 2:45 Pm and I went in and gave the keys to the person at the counter. Asked if they needed to check vehicles for all equipment and supplies I used and they said they would take care of it. After prompting they took my name and number if any questions. The receipt shows it was returned at 745 and actually was 2:45 pm. The larger of the 2 vehicles and tow dolly are still not showing returned more than 2 days later.

great no need to change anything.