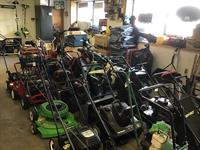 Not wearing a mask to protect customers from COVID. Rented truck was in such severe disrepair that I barely got it to it's location. $50 reservation guarantee refund promised NOT given back

Staff was very friendly and helpful

So this rating is poor, but not because of this location at Jacks Mowers, which I would have rated a 4 out of 5 if this rental debacle didn't start at another location. I had originally rented from the Uhaul location on 2nd Ave in Phoenixville, PA, where I lived, but they switched it over to Jacks location, and nobody ever informed me that the reservation moved to a location 15mins away from me, which caused an unexpected 45min delay and me having to pay 3 movers for 45mins of time that they couldn't even work. So thanks for costing me an extra $125 in moving fees, just because you were too bad of a business operation to call the customer at all and inform them (me) that you had complete changed my original reservation.

Make the contact less pick up and return work better. The entire process was stressful and was not done right. I returned the truck earlier than expected and followed the steps, yet the store had it as still out.

Eva was very accommodating!!! I had schedules uled a truck 2 weeks in advance and actually called to check if all good. Said yes. Yet when I called the location day before, the person said no reservation. Total BS!! Scrambled and called Eva and made it work! Can't thank her enough!!!

Very nice and easy to communicate with. Would rate as a 10+ definitely use them again.

I returned the uhaul within a hour of renting as when the truck went over 40 mph it would begin to jerk repeatedly. I returned to the facility and the lady there said she would contact me with an update after she inspected the truck. I never heard back. I expected not to be charged as the truck wasn't safe to drive and I stated I didn't feel safe, reason for the quick return.

Eva was terrible!! - where to start...location owner claims they have nothing to do with the process. No help at all. Did nothing to try to trouble shoot the multiple problems. Had very poor communications and just kept telling us to call uhaul. No call From anyone after reservation was made with instructions before day of pick up -or even know how to Self pick up the truck. Had to wait forever for the 800 number to pick up -put on hold for a very long time. Finally someone in AZ. was able to help with self pick up instructions. Was unable to get the trunk on time -got it almost three hours late. Eva kept saying it not her fault. Guess you have to be a mind reader. Employee doesn't know the process or cares to even try to help. Will NEVER recommend or use that location again. Was a nightmare from the minute the process was started. Ugh!

IMPROVE THE 24/7 truck share app. The lady @ jacks mower went above and beyond to make my rental happen. Customer service / traffic department was not useful at all.

No one was there when I went to pick up my truck. My scheduled pickup time was 9:30am and I had to wait until 10:15 to get my truck. I ubered to the location which was in the rural suburbs and was left stranded outside in the 90 degree heat. I will never use Uhaul again for this reason.

My pick up was switched without proper time and knowledge. I returned the truck on time. The location was not open on the day I returned, or the following day. I was then given a late notice which was not my fault.

Our pickup was scheduled for 10:00 am when Jack's is scheduled to open. Jack never showed up until 11:00. Many calls to uhaul to try to resolve. Terrible experience. Further, I made the reservation on Wednesday night. When I checked on the reservation Friday night, it had been cancelled. No call to me, no reason given, just cancelled. Called customer service and they uncancelled. I had requested a different pickup location but was told I had to pick up at Jack's. That did not work out so good. Overall, a pretty poor experience with uhaul.

My overall experience was bad. The location was fine. But the online / app pickup was terrible! It would not work. I had to call the helpline and they were not able to fix the problem. Luckily the owner showed up, opened the place and got me registered.and then days after I returned the truck I got notices & calls stating I had not returned it. Very frustrating experience overall.

Evie at jacks mowers is so kind - I appreciate that this rental location is at a great spot easy to get to! Easy rentals and even easier returns!

The woman running it was very friendly. However they did not know anything about my reservation and because of this I could not pick up the truck at 10am like I originally reserved it for. I did not leave the lot with the truck until 120, 30 minutes of which was my own fault. However it completely threw off my moving plans and those helping me move, when we originally planned to start moving at 10 am, to be told that they knew nothing about my reservation and not even be able to meet someone there to get the rental until 1230. Then the truck was only on 3/4 a tank when I picked up, which thank God i took pictures of it, because I had to sign a paper that said it was on full and did not realize until i got into the truck after i signed said paper that it was nowhere near full. And even though I called the 1800 number, and told them this, still got charged for the gas that was never even in the truck. Thankfully after another call to the 1800 number and showing them the pictures I got a refund for that charge but still. The whole experience was painful.

Rental experience was great, the self serve option through the app was easy and convenient. Highly recommend the store that I rented from as well as the pickup method.

I had no problem with the people there. They seemed nice enough to me, and treated me with respect. So it could be assumed that "reviews," overall, are pretty useless, considering how subjective and one-sided that they most often are. As a general rule, if you're nice and polite to people, they are, most often, nice and polite to you. Go figure? A bad experience then could be a sign of a bad character--no matter how vociferous and exacting of a negative review the customer gives. But they're always right...right?

There was trash in the cab. The lady was very slow. Took a half hour to rent the truck!

I rented 26-foot truck they were U-Haul pads inside unfolded( 8or9)and a Appliance hand truck which I was not renting at this time and was not sweeped out.

I set this up over the computer to pick up at this location and return in philadelphia. When we got there which took an hour to drive too we were told they did not have a truck available. I had confirmation code it finally worked out after an hour with woman who was rude and had to drive it back from Philadelphia. Very disappointed.

I got charged insurance when I declined it