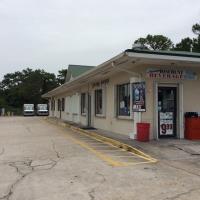 We did our move during the Tropical storm between July 30th and Aug 1st on the east coast of Florida. The guy we rented from gave us until 8:00 AM The 1st to return it. We were 2 hours late returning it and the return guy charged us for a third day. No compassion is what it is. I paid it without comment. 56 beans for 2 hours? It's not like he didn't have any trucks to rent and no one was standing in a long line waiting for the one we used. Other wise all went well.

took 45 min because person kept stopping to take care of other people instead of finishing up with me. No printer so emailed contract. Windshield wiper on drivers side was broken had to stop on highway to try and repair.

truck was not cleaned/disinfected after last customer. printer was broke i received no receipt and was asked to sign a blank sheet of paper that he wrote "i accept responsibility for damages" on. i got no copy of the paper and it was concerning because anything could have been added to the space above the written text. very unprofessional.

The man that helped me was outstanding

I stopped at 2 locations to try and drop the trucks off. One of the drop off centers were also located on Babcock. The first woman at location 1 refused to take the trucks back. She stated there was no room. There was plenty of room. She seemed like she did not want to help. This location the gentleman started telling me the same thing. When i told him about the drop off center down the road told me that too, he paused, then i told him i was going to call the zone office. He then started to come around and accept the trucks at his location. I am sure they did t his to me because i did not do the initial transaction with the location. That being said i was very happy with the pick up location and was pleased with the quality of the trucks.

The truck smelled like an astray. I would recommend no smoking policy and air fresheners. Will not rent from here again.

This location had homeless people on the grass. Too many questionable people frequenting this location. The young man working there was very helpful and polite.The vehicle was clean, but it had bullet holes in the windshield.

Charged cleaning fee and tax for a single soda can I forgot to get out of the back of the truck. Way to go.

Customer service was great as always. I would rent a Uhaul from location again in the future solely based on the great service that I received.

The prices are way too high if the uhual is supposed to be 19.99 plus tax and insurance well I payed out 147

While making my reservation I picked a store that would be open on Sunday. First they changed the location to way too far away. Then when we fixed it the store was not open on Sunday. No call the night before as I was told to get schedule correct.

The owner was polite and called me the night before to confirm, but he was 10 minutes late in the morning and we had to wait inside another 10 while he opened the store.

Nothing against this location, but U-Haul itself very frustrating to deal with. You just select random places and ignore requests. Online support is a waste. Guarantee is a bunch of crock. Even more frustrating is your false claim of a free month of storage. I was able to redeem for my first truck, but can't for second truck since I'm no longer a new customer. You think you would honor this for someone who rents two trucks in a one week period especially after spending $2,000.

I found this location on my own. I made a reservation with uhaul for Saturday pickup at 9am- the location is closed on Saturdays. Rescheduled with uhaul and the new location was closed at 9am and didn't open until 11am. Extremely displeased with the uhaul company.

Employee spent his time ringing up convenience store customers in the middle of ringing me up. I was there for 50 minutes.

I had to wait 25 mins to get rental because clerk told me it was not a one-eay rental and had to be returned later that evening. I told him I made a reservation which allowed it. He called his manager, which we had to wait for return phone call, who told him it was fine. It was wasted time that cut into moving day. Also, the rental was clean but it smelled terrible/-like old urine and inside of a barn.

The whole experience was awesome .

every thing was great ! will go there again if I need a truck

I arrived and had not selected to self check in. The man working said his system was down. It was about 10 minutes and I demanded he do something about it so I could be on my way. It was another 30 after because he needed instructions over the phone to put me into the system. I think it should have been easier. I like U haul but in the future so will use a uhaul store where they know what they are doing.

I was overcharged for mileage by 20 miles

this review is not for the drop off location but about your location at 46th and palm bay rd. when I picked up the u haul I was told that I could drop it off at any location in palm bay.i went to your location at 46th and palm bay and was told I could not leave the vehicle there because the manager and I use the term loosely had no space for it. the location is the size of a football field and there were at least 20 open spaces.he made me take the truck to another location on the same street 3 miles away.i spent over 3 thousand dollars with u haul in the last month and this is the way I was treated by this so called manager.and to top it off I was charged 1.20 cents more because the three miles I had to travel put me over my limit..obviously the money is not the issue the issue is MANger who does not know how to treat customers. I am very disappointed with you and I would hesitate to send anyone I know to u haul.i know my next rental will be wiyh another company.this manager needs to be retraind and told how to take care of good customers or I am sure you will lose more business..

This was our first time renting from this location, but it won't be the last. Great customer service.