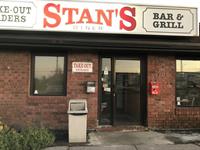 Honestly, the mobile check in is the bomb dot com

The website said the place was open was not. Phoned all day to confirm it was open, no response. Business was a bare open lot. Phoned U-Haul # to get a response. (She was helpful). Phoned next day to confirm delivery/return. Still no answer.

The truck smelled badly of smoke, what is uhauls policy on smoking

The location is temporarily closed so you should only use it for full self-checkout. This should be noted on the website. Having said that, got good support from Alex to complete self-checkout . Would use them again.

Was not open during operational hours. Used drop box for the keys.

Was great of you have an account and can digitally return the vehicle using the app. Less ideal if you don't have an online account. Luckily, despite the sign saying there was nobody at this location, the man who came out to help return the vehicles when we called the number on the sign was able to do the return no problems.

Had some trouble with the website drop off and the employee was very helpful.

Improve your online interface. Improve your lines of communication. Better support for your staff.

- The units could use lighting - especially the one we had as it was very dark inside and somewhat hazardous to load items safely. - the hallway lights were not on all the time in some parts - again making it dark. - maybe you could consider a pop/water machine? - especially now with Covid, recommend a sign at each entry advising patrons to please not park in front of the access doors into the storage buildings ( the yellow striped pathways in the parking and loading area, this happened to us several times and the last time a fellow patron was very confrontational when asked if they would mind moving their vehicle as it was blocking the door. When moving larger loads fully stacked, it can be difficult to manoeuvre safely around the vehicle, especially in consideration of the science behind momentum. - the pass code doors into the storage units do not open fast enough when heading back to the loading zone. When the carts are full, they have momentum and can be difficult to hold back without risking hitting the door, the other automatic door into the loading zone opened much faster and made it easier to manoeuvre the cart safely. - your washrooms are top notch! - your staff was super amazing throughout all of our dealings - yet I did find that most times I had to wait to be served, so I'm not sure if a better analysis of peak hours versus sales per hour would provide better analytics and direction as to staffing ratios? Hope this helps and best regards

I had a hard time with the online checkin. Customer service was in Quebec and the customer service person on the phone was very rude, made me feel like I was wasting his time, then pull me on hold and pasted me over to a rep from Ontario, who happened to be very nice, friendly and helpful. I expected to pick up the truck at 75 Brreezehill Ave not Stans Diner 7.6 kms away. Apparently I was to receive a confirmation. Text but never did. Perhaps a real person contacting the customer the week before would have been good customer service, in case your customers have questions. I have rented from Uhaul in St Catharines and they were great. I would never consider using this one again.

Alex was very good to us and made the pick up very easy.

Stans Diner has furnisher with stains and crumbs all over, I did not want to risk my clothes having bugs by sitting down. We had to talk with someone on their home phone about our uhaul pickup and even the person on the phone seemed agitated and seemed like they were not expecting a call. When entering the restaurant, the owner was on the phone and stayed sitting down without communicating anything. I thought I was going to get scammed by Uhaul at this point. The van we requested had crumby seating even though it was new. The back of the van was gross and had to use extra furnisher covers to cover the floor. The owner of the restaurant gave us the wrong dolly and we had to explain what we ordered, and get it ourselves. When dropping off the van, I could not do the drop off over the site since it was not showing my order and had to call Uhaul services. The â€œsketchyâ€-ness of the restaurant, and it's filth, is why I am not ordering a Uhaul here again, which I will have to in a couple months and will find a new place to do so. Poor service and was a bit frightening as first-time Uhaul customers.

Extremely disappointing. Kept getting asked for the contract even though I was showing the email confirmation with all of the details of the Uhaul booking and never received a paper contract when we picked up the Uhaul. The man didn't believe that his location was our proper drop off location when in fact I was showing him the email proving we were at the right place on the right date and time. Then after all of that back and forth having the contact wouldn't have mattered anyway because he then started telling us aggressively that he didn't have space for the uhaul anyway. We then had to drive 20 minutes away to drop it off. This is unacceptable and I will never rent from Uhaul again.

Very much a self help location, though there was someone in one of trucks to help.

Just keep it up.

When I picked up the vehicle it had a foot of snow on it and no snow brush to clean it off. On my booking I had checked off the order for two mattress covers. These were not included with the truck. To summarize the agent on the phone was unable to help and indicated that the mattress covers were not on the order. Odd I received a message two weeks after asking me if I'd be picking up the covers. Terrible service!

Not one to nit pick generally, but , while pick up was fine, dropping off is less so. There was literally nobody to hand keys to , or to do a walk around of the vehicle upon return. So I ended up doing it as if it was after hours. Though it was not. Just generally an awkward transaction over all.

The manager of this location was wonderful , because he personally picked us up at the Viat Train Station and brought us to his location. I had asked for the location at 383 Coventry Road (we could have walked to this location from the station), but your computer claimed that there were no 10 trucks there. WE had to drive past this location on our way to our destination, AND there were numerous 10 trucks at this location!!!!!!!!!!!!! What gives? I have no problem with Stan's Dinner or with Alex, but I do have issues with head office sending me to a location which was NOT convenient,,,, however Alex drove the extra mile to make up for this issue.

The phone # at this location had not yet been activated, but it is connected to a diner-restaurant, so the drop off-check in was done while sitting having breakfast. Good compromise!

Where do I start? The phone number for your u-haul location does not work. I had to call the restaurant and fortunately they gave me the number for Alex. Truancies has a bald right rear tire but I had to take it as it was the only one there. The fellow was nice enough to come out to meet me at 8 pm but that was after a lot of phone calls and it appeared that this was not the norm. I guess this is only a satellite u-haul location.