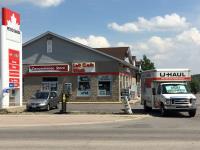 I slept out in the cold all night,because i put the key in to start it and the end broke off.call u-haul and got NO HELP..Very SAD,and will not ever rent from you AGAIN.

I also placed an order for moving boxes at the same time as ordering the truck and at no time was I told that that location didn't have boxes before I paid for them on line. Then when I was told they didn't have any boxes when I picked up the truck which just so happened to be the day of the move!!! Then I was told I'd need to contact another location which I did and not only wasted moving time but also had to put extra miles on the truck running around picking them up!!!! Not very good customer service at all. Then to make matter worse I had to buy them at the other location??? Then the ones I did pay for showed up at our door Tuesday night after the move and now they are not needed.

We were forced to use this location when our rental in Bramptpn became unavailable. It is a gas station, so better than a supermarket but not as good as a dedicated facility. The staff are very helpful and friendly so I recommend it, the only issue was that the truck had not been cleaned and it was very dirty. I hope the previous renter was charged for that.

The customer service rep was not very friendly

My recent experience at this U-Haul location was absolutely terrible. Both staff members were extremely unprofessional and down right rude in how they conducted their interactions with me. I have rented vehicles on business trips as well as U-Haul vehicles when required. During thirty years of renting, I have never experienced anything like I did at this U-Haul location. This was my first time renting at this location since the one I typically go to has stopped being a U-Haul location. The staff at a U-Haul location should be able to explain the invoice being given to the customer when they return the vehicle. My rental was a simple 3 day van rental with a certain amount of kms driven. These staff members had no idea how the kms were charged in this rental agreement even though one of the individual's created my rental agreement. I was forced to take the original contract, as well as the final invoice and show them all of the math in order to ensure that the charges were correct. As I tried to explain the form, they continually talked over me. They both knew I was getting very upset because of their behaviour and they continued to talk over me, saying that I was wrong. When one of the gentlemen finally saw that I was right, he sarcastically said, â€œOK, so you're smarter than us." The staff at this location simply do not care to be informed and just blame U-Haul for their forms. I have learned a lesson from this experience. Having since read reviews, I now see that others have described unprofessional behaviour by these staff members as well. I will steer my business elsewhere. Historically U-Haul has done my family well, no complaints. Renters beware of this location, you have other options close by.

The van i had, was leaking fuel from the start. If I didn't need it so badly that day, I would have left it there.

Minor dirt in the U-Haul but the pick up experience was awful, the last U-Haul I rented had a Dropbox for the key (which is what I thought I was getting when I selected mobile pick up), this man at the gas station made me wait forever, there were no customers he was counting money and organizing things on the counter. I waited for him to stop and once he moved away I said â€œsir I just need the keys â€œ and he told me to hold on and continued doing what he was doing. When I dropped the van off he said â€œI'll be back to check it in a minuteâ€ and left the gas station entirely, so I left as well, I had to go to work I didn't have time to wait on this disrespectful inconsiderate man.

Despite having completed online check in, I had to wait 25 minutes for person ahead to be signed out then me. Staff did not take precautions against COVID-19 by wiping down terminals or pens, counters or use a plexiglass barrier. No walk around of vehicle. No hand sanitizer at counter. Note there was sanitizer at store entrance and staff were wearing masks. This casts doubt as to cleanliness of vehicles and proper sanitation. Would not rent again.

1) Truck was not cleaned at all. 2) I was told for early check in that the process in store would be limited I did the early check in provided my License and still was asked for the license and was there for a long time. 3) Floors of the truck not maintained / windows a mess / also back was not swept

This latest experience might turn me off of UHaul for my future rental needs. I arrived to pick up my rental reservation and I was told that the staff was "busy eating" which took 15. It took another 25 minutes to process the rental agreement. This delay completely threw off my schedule and resulted in the doubling of both my mileage and my gas and in total the cost of my rental.

These people are excellent, always helpful.

Would have preferred an 8:00 a.m. pick up time rather than 9:00 a.m., but that was the earliest option. Overall, a good experience.

Was a really good experience!!!!

When i went to return my equipment the person serving me was a very unprofessional and disrespectful to me. He was clearly showing signs of stress and decided to take it out on me. Another customer even stepped in to try to get him to stop behaving that way. It was totally uncalled for and completely UNPROFESSIONAL. At one point I almost called the police. It was ridiculous and no one should ever have to deal with that!

tell your representative to brush upon on the law as he broke serverals and diened my information very disappointed have used you for ten years but never again reservations not kept even 3 weeks in advance would not service the customer needs so you lost a customer and 5 more moves this summer ,,,, at this location close it get a new dealer,,,,,, had to take a 20 footer and speedometer still in MPH with no conversion scale was treated second rate not as a customer would expect and deserve

Wasn't able to get a 20 foot truck last minute Was promised 40 cents per km and first 50km free for the inconvenience and then that was taken back, and no longer applied due to something I was never informed about even after a phone call prior to picking up the vehicle The location charged 32 dollars for gas even though they were stationed at a gas station but due to weather the whole entire station was flooded out, therefore not allowing the uhaul to be filled at that location The manager on the phone at uhaul was very unhelpful through all of these issues and would not hold herself or her employees accountable

Waiting on gentlemen to come to the location. But when he arrived he was lovely and helpful. I always go here and never have any problems.

This is the second time that I've rented here and each time was incredibly slow. Even when I chose the mobile rental option, we waited over 30 minutes for pick up and drop off. When I asked him why there was such a long wait, he just shrugged and said â€œthis isn't all we do hereâ€. I will never rent here again.