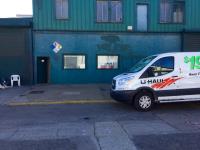 The real people service was AWESOME but the online experience was less than acceptable. Even though I reserved online the site didn't have any record of it. When I showed up it was closed, but once I contacted them they were very responsive. Also, the site should probably update their contact information since on Google/Yelp it has an out of service number listed. Again the PEOPLE were both great though.

Nothing you were very helpful

Location was friendly and helpful. What made my experience difficult was UHAUL. No one called me to confirm my appointment (even though I received multiple emails telling me someone would), and they changed my pick up location. Had to downgrade to smaller van. App did not work when doing self check out. I Would recommend the location, but not the UHAUL brand.

It is hard to find and the person wasn't there when it was time to pick up the truck so I had to wait for them to arrive. Since most U-haul offices have a parking lot, you should indicate that this one doesn't do you can make an informed choice about leaving your car.

This place struck me as sketchy. The odometer was one mile off when I rented the truck but they refused to change it even after they confirmed the difference; i was charged an extra 99 cents but that's no big deal, it just made me nervous about the whole return situation as described next: No one was there to receive the van (at mid-day!) and I was forced to park in a yellow zone (there's no lot; only street parking). There was a paper sign on the door saying what number to call, if locked, so I called that number and the woman who'd rented me the vehicle in the morning (she was training a man while renting me the vehicle that morning) answered the phone. I requested that someone meet me to receive the van. The woman on the phone said (about the yellow zone) "oh, well he lives right across the street so it's fine, and he must be on his lunch hour. So I said that in that case I'd wait for him to return from lunch, and she said, "oh, wait, that's it, it's Saturday! Office hours are only until 1" (it was 1:45 and the website said they were open, so that seemed unlikely). So I said, "what if something happens to the van after I leave?" and she said, "it will be fine, you got the insurance." (she'd told me when i got the keys less than 4 hours before that there's a $150 deductible even *with* the insurance, so that was not reassuring). That whole exchange made me really nervous; she sounded as if she were making things up as she went along. I read some reviews of this rental place in the morning; one reviewer said they were held responsible for damage done after they'd returned the vehicle. But there was nothing I could do; no one was coming to meet me and receive the vehicle. So I did the self-checkin online, as she suggested (uploading pictures of the clean interior of the car, and of the odometer, and of the place I'd parked it), and I left the keys in the mail slot as she instructed me, and i hope no suspicious charges arise. I've been reading other reviews on this place and it is doing nothing to reassure me! I will tell others to avoid this place, for peace of mind.

We were rerouted to this location and had to talk to the owner via a phone that was on loud speaker. The worker was there just to hand over the keys. It was a very bizarre interaction via the phone. The reroute cost us time and money since we incurred more miles to get to Sf and the bridge charged a toll. Originally we booked a SF location.

Very good customer service, very low key area. Love renting trucks from them. Both times I've rented from them in and out quickly, as has trucks. Thank You

I scheduled a pick-up in Alameda. When I arrived, they said they had nothing available and that my reservation had been switched to Oakland. I never received a call or email notifying me that my preferred pick-up location was unavailable. I then took another cab to the Oakland location. The office manager was not there to take care of paperwork. At first it appeared they did not have a truck available, then they found the truck but not the key, then eventually they found the key, but the office manager still had not shown up, so we completed the process over the phone. Overall, the online/app booking process was ineffectual and completely frustrating.

More parking space for returns. It took us a couple of minutes to find parking. Luckily, Antonio was available to take it off our hands :) he was really helpful.

The worse experience every... Next time I'll get a truck from Home Depot. Problem still not resolve.

I've been charged 50% more than my contract for no reason.

Fire the guy that works the desk because he sucks at customer service. I reserved a truck for 9 am and didn't get to leave until 945 am. This is unacceptable. It was the first of the month and there is no excuse for not staffing the office out to deal with the volume of customers. Other customers complained to me that he was rude to them and slow. When I expressed that I was dissatisfied with my experience, the clerk said behind my back that I had an attitude. I replied that I did have an attitude because I was not receiving the service I paid for in a courteous and timely manner. I had a schedule and lots of stuff to get done that day, just like anyone in the middle of a move. The clerk was impatient with me and the other customers and was rude on top of that. He threatened to "not let me have a truck" at one point during the interaction because he didn't want to hear what I had to say. If I behaved this way at my job I would be fired. The reservation also indicated that I would be able to retrieve the vehicle using an app, and that was not possible at this location. My time was wasted and I felt disrespected by someone who was failing to perform on every level. I didn't receive an apology or any consideration for my trouble.

The gentleman Antonio needs to learn how to interact with people better. Causing major issues with customers who were patiently waiting for trucks and when they tried to ask questions, he completely dismissed them and gave them some very rude comments. I don't think it's fair to over book trucks and then blame the customer for the issue. I would hope that you can do better in the future. I will not be recommending this location due to this intense situation.

You charged me for a gallon and a half of gas, even though I returned it with 1/8 of a tank more than when I picked it up.

The truck was not swept out before we got it. Our pick up time was 915, we got the truck at 11am. They changed the location of pick up at the last minute.

Bad management and and horrible staff

This place was really sketchy and they didnt go over the truck with me and didnt seem to want to be bothered with protocol and the charged me for gas the next day even though I brought it back with more gas that I got it with and cant get a hold of anyone related to this location to dispute the charge very unhappy and disillusioned with uhaul !!!!!!!

The lady I talked to on the phone and the man at the location told us to put the keys in the drop box without going through the return process with us. Then the next day I had a fee on the final receipt for gas. They stated it was at a quarter tank when it was really at a half tank. I'm still trying to get everything cleared up, but who knows since we didn't actually going over everything.

The night clerk was such a nice guy and very helpful. Honestly were it not for him I would have given one star.

An employee was unable to come to work, so we had to connect remotely. It took an hour to get our moving van. The moving van they gave us was out of battery, so we had to wait even longer to get another van.

do the "truck share", the staff is a bit overloaded during peak pickup time. Get a coffee before and be prepared to wait 15-30min.

Friendly workers, went out of their way to make my experience better, highly recommended!