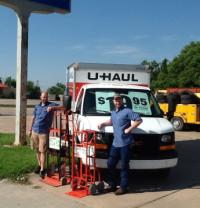 Good service and excellent group of guys who helped me.

I had an 8 am pick-up time. Didn't get it until 9:30 because the manager didn't show up to open the store. When the owner finally arrived he didn't know how to do the contract. While waiting I called U-Haul customer service. She immediately started explaining it was my fault because I had signed up for electronic checkout which was irrelevant since the store was closed and I couldn't get the keys. The inside of the truck was filthy from spilled drinks. Wouldn't use U-Haul again but they're the only service in my area and you can tell.

The convenience is nice but the truck smelled like someone smoked in it. The console was a little sticky like someone spilled a drink. Proper cleaning could change my opinion.

I returned the uhaul on time, I turned it in saturday afternoon at 230 PM, I called the contact number and I was instructed to go to uhaul.com/share for after hours drop off, and then I get charged for an extra day. I would like that refunded to my card, I only used the truck for a few hours and returned it. I did not keep it overnight. Please refund the $40.00 plus the additional $14 for insurance.

The rental process sucks! The last 3 times were problematic. (1) could not rent at location and had to call 800uhaul from rental location. I haul would not share why system was down (2) used 800uhaul to make reservation but corporate computer system at location would not work; long delay (3) used 800uhaul and was sent to wrong location, that was NOT a rental location; then went to another location to again find that corporate computer system was again down. You would think after decades of rentals you could get it right. Your market is an APP away from being obsolete.

Everything was wonderful, I was very happy.

You took money off my card for towing trailer, you put it back on, then you took it back off you say. On my CC it only shows you have taken it off my card twice!!!!

Could not arrange rental at location, required to call 800 number. Next time couldn't pick up equipment that I already reserved from 800 number because whole system was down. You would think after all these years that your rental process would be easier by now, but alas no.

Service was super. Personnel were friendly, knowledgeable, and very helpful. I would definitely go back again for my next rental!

U-Haul Computer system would not accept Input+ from the R Pro Tire Service Representative in Newton, Ks that I had returned my rental on the same day I rented it.U-Haul also double charged me.. So I had to talk with a Customer Service Representatives 3 times to get it right! I think U-haul can do better than this! Sincerely, Robert Tompkins

When I picked up the trailer at R Pro Tire. The guy did not want to mess with it and was just trying to get it done and get me out of the way. I ordered 24 blankets but he claimed I did not order any. when i asked about them he only had 4 blankets and gave them to me. I then got to the drop off and my receipt did say I had ordered 24 blankets so I was responsible for 20 blankets that i did not get. when calling them back he said he did not have time to mess with it and to have the drop off spot fix it. he was not helpful at all and very rude.

I rented the trailer on the 7/26/19 and dropped it off later that evening after speaking with a U_Haul rep. They informed me of the drop off location and that they would be closed and to just leave it there. 15 days later I received an email that it was checked in and I was charged 15 day late fees. I was under the assumption it would be checked in next business day at drop off location. I spoke to "Ron" I believe and he was no help and said the trailer was not there Monday, which is completely untrue as I spoke with U-haul 7/26/19 and dropped the trailer off that evening where the representative told me to. Waiting to hear back from the U-Haul area manager

Having a rep that understands the the rental process better. Was well pass 5:00pm before I got the rental and out of there. Didn't have a print out of time and location of drop off, wrote the wrong location on a pice of paper for me.

Good morning, I went to rent a trailer at R Pro tire and this note was hanging by the computer for the desk person to read. I reserved my trailer on 6-28-2019 a few minutes before this note was posted at the desk. This owner of this facility probably not the best person to represent your company. He had a problem with my brother that worked for him over 10 years and fired my brother because he called him out on several incidents concerning how he ran his business. This was the first time I ever rented a U Haul trailer from this company and it WILL be the last time due to him trying to retaliate against my brother. Its too bad that one bad apple ruins it for the whole basket. I thought you would like to know. I will be renting again with another one of your vendor.I have attached the note to my email that i sent earlier this morning.

I reserved the trailer I needed in McPherson, 30 miles away. I had to travel to Newton to get the trailer and then return it to Newton. Other than that the service was fine, the trailer I rented had all the required equipment and was very nicely set up and easy and to use.

We got amazing assistance with the trailer and if I need one in Newton, Ks again I would definitely rent one from there again!

everything was great, thanks

the personal was amazing, no improvement needed.

Customer service was lacking--no interest shown in reconciling the time of pickup and time to return which was less than the 24 hours I had contracted for. This was only settled satisfactorily by my calling U-Haul directly and speaking with a representative (Pat) who was very helpful.

It was terrible from start to finish. Both uhal truck and storage lost my reservation in 6 separate occasions. When we finally found my original reservation it was under the wrong name and had half my too and half my from address. I spent about 4 hours on hold and about the same talking to people on he phone both in Kansas and Nevada. Unless you do something to make it right, I will NEVER USE YOU OR RECOMMEND YOU AGAIN!!! I've taken a week to respond to your request due to being that frustrated. I had to be on the phone while in the uhal with uhal about them losing my reservation. Does not help with a stressful cros country move!