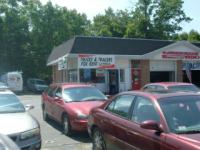 Easy to find - I parked my car here for 24 hours while I was using the truck, although it's not clear if that's allowed or not. Was able to check out on the mobile app at 11pm, which was convenient, but the whole process took almost an hour. Snafus included: * Checkout form needed a phone number, but for some unclear reason it rejected my actual phone number because it was â€œalready in useâ€, so I had to use an alternate. * Checkout wouldn't work from a laptop on WiFi or tethered. It says it requires â€œgpsâ€ and for whatever reason, the geolocation wasn't putting me close enough to the vehicle location. * After uploading my license, U-Haul needed me to confirm my identity and required 1 of 4 options. First I provided a photo of my passport. An agent said they couldn't verify and to provide another. I uploaded a photo of my lease (I feel like the likelihood of anybody having these things in their car with them at 11pm is ridiculous, right?). The agent in the chat window of the app couldn't verify me with the combination of my: drivers license, passport, and lease. The agent asked for a phone number of a friend who could (somehow?) verify my identity - at 11pm while it was 20Â° out and I was trying to pick up a uhaul. I found an awake friend who agreed to take a call, and my session for the checkout timed out. After spending a few minutes logging back in, it must have kicked to another agent who verified me on my original documents. Long story short: if you've never used the mobile checkout before, make sure you give yourself some buffer time if you're in a hurry. It was almost as time consuming as trying to check out a uhaul from a human. I do have high hopes that the second time around may be easier.

This person was not friendly, tried to close early despite me calling ahead to make sure he would still be there within the listed hours. Could have been better.

Limited hours, had to check with an adjacent business to find out where to leave my vehicle. Upon return my vehicle was blocked in, had to find someone to move their car. Employee of the business.

The man was very nice but very slow. It took over an hour to check out. The truck was fine but it only had one eighth of a tank of gas. It was bumper to bumper traffic and we were afraid we wouldn't make it to a gas station. My biggest complaint, however, is that we were told we could return it anywhere in Riverside, RI. We kept asking for a specific station but he repeatedly said anywhere. I was billed extra for returning it to the â€œwrongâ€ stationâ€ even though I was following what he said. But he was a very sweet older man that seems to love his work.

This was a difficult location to find, even using google maps! The check out was easy due to using the telephone, but I would have preferred a location that was closer to the highway, with personnel there to offer assistance.

I believe honoring the online reservations made weeks in advance would really improve customer experience. I had scheduled a pick up in Franklin and a drop off in Natick. I received a call and update the day before saying my truck pick up had been changed to Natick. This was not ideal, as this was the town I was moving to. I had to drive to Natick, to drive back to franklin, to drive back to Natick. The same thing happened to my roommate. She called and spoke to an associate who helped her change her reservation to Foxboro. When I called I spoke with a very rude representative that stated, â€œWell if that's the closest location according to the update there's nothing we can do.â€ I then explained my roommate just called and changed it. He then said that he â€œalready checked.â€ I'm not sure how, as he never asked my name or confirmation number, nor did indicate my to and from locations. He then said in a very aggressive tone, â€œWhat, do you want to speak with someone else?â€ At this point I didn't feel it was worth it to escalate I told him no thank you and disconnected the call. I received my bill today with charges for going over the allotted mileage. Fortunately, it was less than a dollar. However, it would've been avoided if the reservation I initially made was honored. I am a corporate customer service representative, and I understand that working with the public can be stressful and, at times, frustrating. I feel that the representative I spoke with could've tried a bit harder to make this experience a more positive one. Thank you for taking the time to survey and listen to your customers.

be more clear that the pickup window in only for 1 hour. I arrived at 9:15 for an 8am pickup and the reservation was expired. I did not see the one hour window mentioned anywhere.

It rained that day and the roof leaked and boxes got wet and stained some clothes. Can't blame dealer if he did not know

Ramps. My assumption is the rental would include ramps.

The truck contained trash and the windshield was dirty but besides that the equipment was fine. The gentleman in the office at pick up was courteous and helpful, that is, until after drop off after I paid and pointed out on the bill that I had not asked for nor authorized the $14 Safe Move charge. He insisted that I must have approved the charge on line. I made the reservation through your 800 customer service line with a person. At that time I was not asked about the insurance, nor did the gentleman ask me about the insurance when I picked up the truck. I wound like a refund please.

Was supposed to get truck in natick on rt 9 Called day before and then within half hour of pickup to see if truck was there. They said yes! Got there and person said he didn't have a 15 ft truck and was rather rude. Said â€œwell you didn't speak to meâ€. No help at all. Luckily citgo had a truck and man there was awesome. Not sure whose fault. Got no answers as to why 2 people confirmed our truck was reserved for us and then nothing there?

Second time I have picked up at this location. They are the best

4 stars for Matukas Citgo -- they had the equipment we had rented, although we had asked to pick up at a different location. The people were friendly & helpful. But their Saturday hours start at 10:30 am & we had requested an earlier pick up. We arrived and the location was closed, so we had to make a 2d trip back after they had opened. This delay meant that we lost our loading help, and had negative implications for our whole move. 2 stars for U-Haul. They assigned Matukas Citgo as our pick-up location. Apparently we had something called a 24/7 rental (the nice folks at Matukas told us this when we did pick up the truck) & could have picked up the truck at any time, even when the location was closed. BUT the email from U-Haul cofirming our rental and assigning us to the pick-up location did NOT have any information about this 24/7 rental -- did NOT have instructions to call U-Haul to get the combination to the lock-box to get the key for the truck. In the end, Yes, we did get a truck on the date we had reserved, but the later than we had requested pick-up time did have serious negative implications for our move.

George the owner was exceptionally helpful in the whole process. This location is serving your company well!

First of all, online the website says this location opens at 10 am which is completely false, as when I arrived a sign on the door said it opens at 11 am. Then, an employee strolled in at 11:30 am completely unconcerned that I had been sitting there for an hour and a half waiting, as I had checked the opening time online. Then, the owner informed me that he did not have my reservation or a truck for me, even though I had a confirmation email from just the day before. I was supposed to be able to pick up my truck at 9:30 am, but they did not manage to get me a truck until 11:50. This delay caused me to be late to my move-in appointment for which I needed the truck. I was issued a refund of the $50 reservation fee since the truck was not ready, but I feel as though that in no way makes up for the extreme inconvenience and personal distress that occurred.

dealerships on both ends were fine. only issue is the price to go from MA to Maine was nearly 5x the cost to go from Maine to MA. Too excessive mark up for a 2 hour ride. Don't agree with supply/demand company line. Plenty available at both ends.

Originally we went to your RTE 9 location in Natick. We were 4 days in advance of our needs. We reserved a 20' truck. We were told it was at Matukas Citgo. When we got there, there was no 20' truck. Matukas had no knowledge of our reservation even though it clearly said on our paper work from the RTE 9 location where to go to get the proper truck. Matukas recovered nicely for the RTE 9 folks and got us a smaller truck. However this created extra trips for us. Matukas was great to work with. This is the second time the RTE 9 location has failed us. We ordered a trailer hitch and install for one of our vehicles and set an appointment. We paid extra to expidite the part. When we showed up at the appointed time the part was not there. They called me 5 minutes prior to the install time but I was driving for my employer and cannot use the phone. The employee showed no remorse. Just told me he called. 9AM appointment and he is calling to cancel at 8:55AM We wont use Uhaul for those kinds of things anymore.

Great service and I have already recommended to a friend and they rented from there.

The Location I had reserved a truck at , 2 weeks before the date I needed the truck, and did not have it for me when I went to go pick it up at 9am. There was no phone call, text, or email telling me there was a problem and my truck was going to be unavailable. They then sent me to the 67 E Central St Natick, MA location and told me that is would be open at 10 am. They did not open untill 10:30am. The check out system was so slow that it to 20 minutes for my rent contract to print. All in all this set me 2 hours behind schedule.

The guy I met, he was very cranky and yelling because I couldn't hear that well. He hesitate me to sign the form without letting me read everything before I sign! He shouted not to worry just sign, The insurance will cover everything. I asked him I would like to walk through to check the Haul Truck to make sure no damages or dents. He sighed and shouted again that insurance will cover everything just sign the form. He just put estimate of mileages without asking me. I have exactly # of mileage in my agenda. The blankets I asked for 6, it was handed half unfolded. and the pick up process took me more than half hour to get out with a truck. It was uncomfortable and forever service. I had best service at other place so I will not recommended to rent this place/location at all.