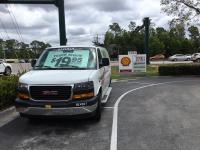 Attendant was too lazy to do their job and check me in at drop off. Told me to unhook trailer by myself, take picture of gas and milage by myself, and take walk around video for them by myself and on my own phone. It was raining too. Unbelievably irritating and truly the worst service ever. I slipped and fell out of the truck taking the walk around video too. Cut up my arm and bruised my hip badly, could have been a lot worse if my wife wasn't there to help me. The entire thing is on video, which I may post when I review U-Haul online.

This is a gas station/convenience store with one cashier on staff so there was no one to assist with the trailer we rented. He called the manager and gave me the phone to talk to him. The manager was off-site, no where near this location, and took at least 15 minutes to complete our check-in process over the phone even after I had already completed everything I could online prior to arrival. There were other Uhaul trucks parked in the lot blocking our access to the trailer so my husband had to get the keys from the cashier to move them out of the way himself. Needless to say there was no one there to assist us in making sure the trailer was hooked up properly to our vehicle so the manager asked us to take a picture of the hook-up and send it to him. Also, the trailer had been dropped off there that morning and since no one is there to inspect it, there was a broken part that we had to use our own strap to make sure it would not fall apart while in operation. I would never use this location again due to the lack of staff and management onsite.

The Shell employee ignores the UHaul customer until there are no Shell customers left to serve--despite the order of arrival. A steady stream of people into the store means an extended and disproportionate wait. They need to wait on all the customers, first come first served. And work on being more friendly and less rude.

Located in gas station so the guy was super busy. Never checked truck but, I am sure he could not leave behind the counter with so many other things going on. I filled out small paper with the info.

Not even the manager knew what to do, they had to do a whole new reservation all over

Truck was dirty. Smelled of cigarettes and was full of spider webs. Gas Tank was half full. Did intake over the phone at the gas station because the woman was out sick and I was never given a contract. Windshield wipers are broken and unsafe in the rain. Windows were so dirty they were a hazard in the sun. Had to clean truck to use it for a 1200 mile trip.

took Driving back and forth between two locations and over two hours as well as my persistence to get my reservation honored because â€œlines were downâ€ and nobody could/would help us depending on the location. Did finally get the truck and supplies but it shouldn't have been like that. The person at the second location was so rude I left in tears. Moving is stressful enough. Person on the phone was great and did finally get it done.

have someone available to hitch up the trailer, and attach the lights and safety chains. trailer was to heavy to lift alone and the was no jack stand or trailer dolly. no light harness. had to drive to another local uhaul to get light harness.

Make sure WiFi works, and it would have been nice to have a closer drop off location. We went over our free 30 miles returning it to the store.

Trailer had a severely damaged mender that was not noted

The person who we dealt with at this location was no knowledgeable about her job and she signed us up for insurance after we specifically specified NOT to. So we got an extra $14 charge for that and also didn't tell us how much gas to fill it up on the paperwork.

Better place and parking for drop off and pick up

I found the tank of this truck with 1/8 of gas. I reported right away to the guy who gave me the keys he told me to take pictures and when i get back will get this fix for you. When i came back he wrote a note about it but next day i found an email that doesn't show any credit for the gas that i put when i left the store. Only show that i returned thentruck with the half tank policy.

It is a gas station. The clerk Lupita tried to assist me a lot but apparently she wasn't the employee from U Haul so had to do everything over the phone with the actual employee. No one helped me to hook up the trailer or make sure it was safe. This is my first trailer rental so it was frustrating. I went to pick up during my lunch hour from work so I couldn't come back later or wait for an employee to be there, even though that was never offered

I wish they were more helpful getting my garage clicker back that I been trying to get for the past 3 days. I called customer service and I'm still waiting on a call back. Not very helpful at all so far.

There was much confusion at the pick up location beginning with the phone call to confirm, which required a direct call to Uhaul to confirm. When we arrived to pick up the truck, we were told we were supposed to have been relocated because they were "having computer problems." It took nearly 1/2 hour to get things straightened out.