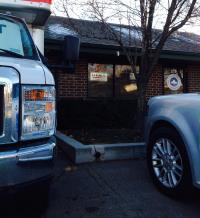 No one there. Hard to find.

The address was difficult to find. It should be clarified that you have to go behind the buildings to find your uhaul. If there was a big sign with an arrow that would be very helpful. I chose checking out with a person but no one was there when I arrived and when I called it went to a voicemail that wasn't set up yet. Overall it was confusing and frustrating.

I uploaded pictures of the truck when I picked it up. There was blood in the seats, floor and cup holders were filthy. The back deck was really dirty , we had to sweep it and tons of dirt and animal hair was all over inside the box.

There was nobody at the site when I first arrived at 10:00 am per my pickup time. The Uhaul that was parked in front was not my rental. I tried calling the number a couple times and did not get an answer. After 15 minutes, someone arrived and informed me that the Uhaul I was renting was in back of this multi-business industrial complex, which was not the location described on the website. Once I located the Uhaul and completed the check-in, I got a code for the key box, which was located all the way in the front of the building. After securing the key, I was able to finally start the frozen, snow-covered Uhaul. I booked the rental with 1-dozen moving pads and they were not inside the truck. I had to spend another 10 minutes tracking down the person I spoke with, to get the pads. I had to pull up my agreement on my phone with little reception, to show him that I paid for the pads before he would give them to me. He was cordial, but this experience was not what I have come to expect from Uhaul. It was very frustrating and took me 45-minutes just to drive away with my rental.

Completely dissatisfied from beginning to end.

While the truck was new and in great condition I didn't receive the dolly I ordered online. He called before my scheduled pick up of 10am at 9:46 am to confirm when I had already completed the pre-verification. When I dropped it off early before closing on Tuesday he was not at the office and later accused me of not returning a dolly that he did not provide, and I did not have time to verify the dolly with the holiday weekend. He charged me for all days of the dolly. I did park it in a different spot because the spot he asked me to park it was occupied. I returned it with above 1/2 tank when I received it below/at 1/8th tank. He was sure to invite me to his church but won't reply to my texts. Do not recommend if you have a time crunch which most people have when moving. When I returned it at 3:30pm MST he was not at the office Tuesday when Saturday he said 5pm, Tuesday. When I called to verify it was clear he was in a UTA job the affected the call quality (loud hydraulic noises). I misunderstood that he wanted it in front of the church, I heard next to the truck. Luckily my husband still had a key in which I was able to go back and move the truck because he was not at the office and was threatened to be towed by the mechanic office/neighbor. But he stilled accused me of not returning the dolly and still chair me for it. He now is not responding to my texts after invoicing me for the dolly for 4 days I did not have it.

Dirty truck. Could hardly see out the front window for spots and dirt. It was not filled completely with fuel or it would not have cost me $27.00 to fill up after only driving 50 miles. They could not give me a receipt because of their computer and printer problems, so I worried and called corporate to get a receipt finally later in the day. I am sure this organization which is a religious organization needs the money for this service, but the location and presentation are not the best for the U-Haul name.

This location is a joke, there is no one to help if you can't pick up your rental. I said multiple times that I didn't receive the furniture dolly at the time of my reservation but was charged for it regardless and I have been unable to reach anyone by phone. I will definitely be using Budget rentals next time.

I didn't sign up for the safe move and was charged anyway. The manager was 1 hour late to deliver the truck. The truck I was supposed to get was changed out and the store attendant called the police on me. Manager at store called me angry calling me all sorts of names. Terrible experience they I'm now paying extra for.

Make sure people don't park in front of the truck and mark the drop box. We couldn't find a place , except the place that needed a code, which we didn't have.

I WAS COMPLETLY DISSATISFIED, THE LOCATION WHERE I PICKED UP WAS 30 MINUTES LATE OPENING, IF I HADN'T ASKED ABOUT THE APPLANCE DOLLY THAT I REQESTED I WOUDN'T HAVE RECIEVED ONE AND WOULD HAVE BEEN CHARGED FOR ONE. THEN I WAS NOT TOLD ABOUT THE FUEL POLICEY AND WAS CHARGED 50.35 FOR A 18.9 MILE TRIP, THE FUEL GAUGE WAS AT SLIGHTLY ABOVE 1/2 WHEN I LEFT AND WAS SLIGHTLY BELOW 1/2 WHEN I RETURNED, IF I HAD KNOWN THAT I WOULD BE CHARGED 10.60 A GALLON I WOULD HAVE REFILLED TO THE PREVIOUS GAUGE READING, BUT HOW THEY WOULD KNOW THAT I DON'T KNOW BECAUSE THE FUEL WAS NOT EVEN MENTIONED. I WILL NEVER USE YOUR SEVICES AGAIN!!!!

We were able to pick up the truck following directions given at uhaul.com. That part was easy and quick. We were directed to find the key in a lock box near the truck. Upon return, no instructions were given to lock the key in the lock box. We did not write down the code to open lock box so we tried multiple times to contact the owner. He did not answer and his voicemail was full and we could not leave messages. We tried contacting uhaul but the rep could not direct us what to do. We did not feel comfortable leaving the keys in the truck unlocked. After waiting for 20 min and trying to contact the owner multiple times, we decided to leave the keys locked in the truck so that it would not be stolen. We are in hopes that the owner has other keys. All in all we loved the online pick up but would recommend having the owner available by phone or text for questions.

Super friendly and explained feature such as dolly and blankets. Thank you!

Did not have enough trucks only had 1 truck

Slow service. They said this location was where I would pick up the dolly and they didn't have it

The experience us too ridiculous to explain. It was awful!

The rental location was in an office/church establishment. Initially confusing other than there was a uhaul sign in the window next to church stuff. I arrived early and no one was there. After a guy showed up, they took my credit card information and relayed it to someone else over the phone, which made me feel not secure at all. When I dropped truck off next day, same thing was happening to another customer. They looked uneasy too. Overall, I got what I wanted at a good value, but experience felt very unprofessional.

Great place to rent a truck.

The employee was very kind and accomodatin g, but had no idea how to help us get out the door quickly. It took almost an hour to create a reservation and drive away with a truck, and the whole time he was on the phone with someone trying to help him. He didn't seem familiar with the computer system in any way.