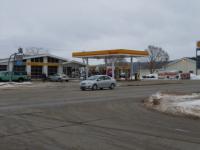 Agent very knowledgeable and friendly, would totally recommend this place

The windshield wipers did not work well, esp the driver's side

Great drop off service. Nice people who were very helpful.

Great location. Very unprofessional staff. Swearing and complaining when I came to pick up trailer

Have the equipment requested in truck. Have truck ready to go. Had to wait over an hour to check out. Only one person at location knew how to check out.

I requested to pick up in Marquette Michigan but was sent to munising for a pick up. They tried to give me a 6x12 even though I requested a 5x8. I worked with them to change my reservation to the next Monday morning to pick up a 5x12 instead. They were very helpful although it took an hour to get the trailer reservation completed.

I reserved my u haul for 9 oclock i showed up at 905 and was greeted by a rude man complaining that i was early that i wasnt supposed to be there until 10. Which i replied no i reserved the truck for 9 and the i recieved a message saying that the truck would be ready in morning. So he checked the computer and seen i was right and then he called someone and asked if he had his boat in yet. That the guy for the truck is here. He came back to me and said it wont be ready for another half an hour so my ride had already left so i walked across the street to subway and sat there for a half hour when i returned at 945 the guy seemed very aggitated and called someone again to say hes back and then i stood around and waited another half an hour for the guy to show up to do the paperwork for a truck that had been sitting there the entire time so i was supposed to get truck at 9 didnt get it till almost 11putting me way off schedule and my helpers had to leave and i had to do all the loading on my own making things very difficult

Please open the shop's doors at the advertised opening time, as it opened about 20 minutes late on our pickup day.

nothing to improve, Tom always treats us good. Great service!

It was great. Charlie did a good job checking us in and out. 20' Truck was easy to maneuver. My wife and I loaded and unloaded in an hour on both ends. We saved nearly $4000 doing this job by ourselves!

Nelson's was great. They were nice and prompt, great group of people at that location.

I can't say enough how great this owner was. We lost our key and had to have a new one made. We were late with the return but he was so nice and understanding that it took a lot of stress off of us. I deal with a lot of business owners in the course of my job, and this man was in the top tier.

My issue was with Green Bay district office, not the Munising pick up. In fact Tom at Munising resolved the mess created by Green Bay (Patty). I had negotiated a rate with Green Bay on March 27, which she refused to acknowledge. I had a printed copy of their email, but she wanted to see the email. I had another customer and Tom verify to Patty that the print out I had was authentic. Tom was great and would have gotten 5 stars. Patty in Green Bay deserved a 1 star,

Despite my original reservation not being honored for pick up on the date, time, and location I reserved, Tom and Charlie at this location were more than helpful.

Worst truck I have ever rented from uhaul. At least one tire was out of balance and going over 50 the driver door rattled with wind noise. Also the cargo area above the cab leaked and soaked several boxes of treasured keepsakes. Based on this truck I would steer anyone that asks away from a uhaul truck.

My bank account was charged 3 times, totaling over $120 for an in town rental, on a 10' moving truck. I had the truck 5 hours, first I was told $20, than $33, than $77, and lastly ended up charged 123, even tho my receipt now says 77. I'm appalled, this is wrong, and if something doesn't get done about this. I'm going to corporate, and if that does nothing, false advertising, and theft would do in supreme court. So far, I have not received an email even back...

We reserved a 10foot truck. At the time of pick up we were given a 16?foot truck. The gas expenses were higher than we budgeted. When asked about this at the time of pick-up the man at the station just laughed and said "we are short equipment here in the UP". I feel like we were duped. We went with your company instead of a cheaper company for your name and reputation and was not only disappointed but feel cheated. We will not use your company again and I will discourage anyone else that asks about my experience with your company from renting from you.

I believe your description if the 5 x 8 cargo trailer should be modified to state that, because of the rub rails, some 5 x 8 cargo trailers have an inside length of only 7' 11", not the eight feet as described. I rented this trailer and drove eighty miles (round trip) just to find out that I could not get eight foot sheets of sheetrock in the trailer. This really surprised me because I had rented another 5 x 8 trailer a few weeks ago for the same purpose without issue. I strongly believe that I should receive a refund for this rental.