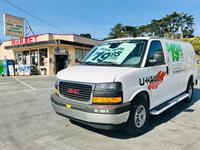 The first truck I tried to rent was much larger and when I put in the brakes they didn't stop the truck right away. I got out and rented a different truck, a smaller one that worked beautifully.

The one star doesn't have to do with the location - it has to do with my uhaul online reservation experience. My experience with the process at the actual location was fine. I created a reservation several weeks in advance, then tried to switch to a bigger truck a few days before the reservation, and the change went through and was accepted online. Then half an hour later I received a voicemail saying that the other bigger truck was not available, that I had lost my original reservation, and I was switched to a different location and a later time that made a pretty negative impact to my sensitive moving schedule. I tried calling uhaul right away to try to explain my situation and was on hold for twenty minutes until I gave up and just dealt with the new reservation. This was a pretty frustrating and negative part of my experience.

Customer took care of 6 other customers interupting our service while we were in process of renting the vehicle. This is the second time they have done that. Vehicle had used blankets in it. It had not been cleaned from previous user since there was litter in it. Not good during Covid19. Will never go back.

Liquor store, feels very unofficial. Lady was rude, did not clearly explain what the total charge included. They did not have a dolly or furniture pads that I ordered with the truck. They kept breaking away from my rental transaction to help the liquor store customers buy snacks and lottery tickets on a different register.

i rented a van, but when i got there there wan't a van and i had to drive a truck. why does your website allow one to rent something that isn't there? i needed it for 4 hours, but by the time i got the truck i only had like 3 hours. the time should have been adjusted

The location is run out of a convenience/liquor store which opens an hour earlier than the U-Haul store (why?). I showed up early to my appointment which was at 9:30am. I went in and said "Hi I know I'm early but I did the early check-in, is there anything else I need to do in order to get the keys?" The woman who was the cashier told me she didn't know how to run the U-Haul side of the store so she couldn't help me and I'd have to wait until my appointment. I said no problem and waited the 20 minutes until my appointment. She then told me I needed a contract but wouldn't tell me how to get the contract. I told her I entered my license and credit card info through the app already and would sign whatever needed to get the keys now 10 minutes after my appointment time. I then called U-Haul and they spoke to her over the phone asking her to give me the keys and that I was all set. She refused and said I would have to wait until 10am which was 30 minutes after my confirmed appointment time of 9:30. I called U-Haul again and they offered me a refund. I waited until the stroke of 10am and when I went in, she was handing another man the keys to his U-Haul as he signed the ever elusive contract. I asked her why she lied and told me she didn't know how to help me and made me wait an hour at the store and 30 minutes after my scheduled appointment. She then asked me if I wanted the keys or not seeming to threaten taking away the service altogether. She was rude and unhelpful. When I got to the store at opening there were no other customers. At 10, there was a line full of people waiting behind me while I had to sign papers to get the keys. There is no excuse for such horrid customer service. She was rude and blatantly lied about knowing how to help me while wasting my time, putting me behind schedule and in turn making other customers waiting just to wait until 10. This location needs to either be under new management or closed altogether. The service is awful and I would rather drive the extra miles than deal with being behind schedule during a move and dealing with these rude people ever again. DO NOT USE THIS LOCATION!!!

Terrible customer service, the cashier went out of his way to be rude, uncooperative and truculent. I would not recommend this particular business to anyone, ever! I have rented from UHUl in several locations, Belmont, Ca, Los Gatos, Ca, and they would check truck for mileage, scratches, equipment, etc. They sneered when I suggested this, refused to do so, left dolly & blankets in the middle of the parking lot, upon my return they were the same, (25 min early) refused to view truck, mileage and returned dolly, 6 blanketss) grabbed the keys & would not give me 6 number code verification,(needed for UHaul moving men) -one employee finally jotted down an obscure tel number for me to call. As an experienced customer service rep, I always try to be a cooperative and helpful customer but they made it very clear that customers were not a priority.

The whole thing where we don't tell you where to pick up until the last minute then drive a couple of hours round trip thing the morning of a move was kinda shitty. The app was slow and clunky during pickup due to a remote location and spotty data coverage. Maybe offer WiFi for a smooth pickup and upload experience? I'm glad I won't be moving again for a while

Have a truck waiting as scheduled. Don't confirm a time if the trucks not there!

I was overcharged for the dolly - I only took one

So easy. I will use here again. Thank you.

This location was the most convenient for me. But, when I picked up the truck, I reviewed the check out paperwork and it said the fuel was at 1/2. It was not, it was really at 3/8. No big deal, so I went back in and told the guy and he initialed the paperwork and wrote that it was in fact 3/8. I returned the truck with exactly 3/8, like I got it. But of course, they charged me $29.06 for the â€œmissingâ€ fuel. I can't get a hold of any one to reverse the charge.

Abusive and dishonest service. Won't use this location again. Will actively discourage friends from renting here.

This location is fantastic. The service is amazing!

Owner provided (incorrect vehicle type) receipt and keys, period. Owner did not provide either an initial inspection or overview/basic use instructions of equipment. The Truck had major scratches on the exterior sides of the unit, undocumented. (Instinctually we photographed all, and submitted info to UHaul.) CoastSide Market is not doing the either customer or UHaul any favors by renting these trucks...very poor service.

Overall everything was as needed and expected. No surprises. Only issue was trying to return the truck with the Uhaul app, the location services did not work despite being activated on the phone. The service was poor, so how does this feature generally work in this situation?

Worst service, rude absolutely would not ever recommend these people to my worst enemy. The only word that comes to mind is scum balls

Terrible customer service. Annoyed by customers. Doesn't meet normal U/Haul experience. Should NOT be a franchise.

You have to set up a trailer by yourself, no help from a representative.