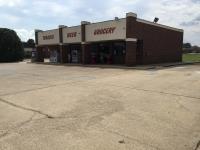 I dont know where to start. Upon arrival, the associate that was present could not help us. Had no clue how to get us our rental that was already paid for. Had to call the owner to come in. After waiting an hour she finally showed up. Then proceeded to be rude with us demanding a payment. I told her absolutely not because I already paid and just needed to pick up. She told me it was just a hold and needed me to pay. I showed her that the payment had already been taken out of my account. After getting stern with her, she says "oh my computer updated and shows you paid and you can go. Now after arguing for 20 min, we had been there over an hour and a half. Poorly ran operation, out of a convenience store, which was busy and had to stop to check people out. Had set this up from another location which was outstanding. This place just plain and simply sucks.

Was tossed around on customer service for 3 hours for a total of 3 times with roadside assistance and 4 times with customer service. Everyone I talked to either didn't want to help or kept saying it was either the other person's job to fix my issue between road side assistance and customer service when I was located right across the way from the pick up location. The dolleys brakes I received kept locking up on level ground at slow speeds intermittently and, and the trailer would start swaying violently upon hitting 35-40 mph...this was not an issue with my car as the last lady on the phone accused me of. Then upon asking for a refund for the defective product since I now have to drive my extra vehicle one way to make it in time I was met with a very rude attitude by the next to last lady that helped me and upon checking in I had to spend another hour on the phone because the owner of the shop didn't know how to check in my trailer in the system. Overall a horrible experience and unlike my prior experiences. My faith in uhaul has been rocked to the core.

We felt like there was very little training and there was a lot of miscommunication. We were told we could pay with cash when we took it back but this location later told us they didn't.

Make sure employees actually look at the equipment being returned. I was given a dirty vehicle that still had items from the previous user left inside and gravel / dirt throughout the back compartment. I was also not given the correct equipment that was â€œguaranteedâ€ on pickup so I had to do without. The employee also left my moving equipment (dolly and pads) in the front of the store for me to load myself which is unusual compared to other Uhauls who have it ready inside in the truck upon pickup.

The girl renting the truck did not know how to fill out the forms correctly. My friend Helen, who was renting the truck with me, actually had to watch over the girl's shoulder and help her. No one went over the truck with us, marked off it's condition, or mileage. Just pointed at it and said, "That's the one". The last time I rented a truck, it was at Secure Storage in Bentonville. Much more professional in taking information AND the girl went over the truck and marked everything on a clipboard. I received a copy.

A receipt at checkout? I don't mind waiting. Not too big of a deal though, as running the convenience store while one deep is tough.

We were treated like second class citizens when picking up rental. All attention was on beer and cigarette sales and we kept getting pushed to the side and it delayed us meeting our movers. If they don't care about uhaul rentals, then they should not be involved with them.

Overall, it was satisfactory. Quick and easy. Staff was very professional and friendly.

U-HAUL Rep at pickup location did not seem knowledgeable about the specific equipment or rates, had difficult completing my reservation at time of pickup and did not provide not me with all of the equipment I requested stating to me that she did not want to count out my load blankets because they were to hard to count, ultimately shorting me a dozen blankets that I had paid for. Cargo area of truck was not clean with mom's attic area having some kind of substance still spilt on the floor and wall. Trucks should be cleaned better. I received a newer Ford 26' truck and was over impressed how the truck drove and handled.

The location was great! We, however, haven't rented a UHaul in a few years and to be honest, I was very surprised in the cost. It has increased much more than I expected and what once would cost us less than $50 for a one trip move of a few things about 12-13 miles, this time cost us close to $150 plus gas. Quite disappointing and we will probably find another solution next time other than renting a UHaul truck. Way too expensive.

Everything was great. The young lady that rented to me was very helpful and informative.

Apparently this is a new dropoff -- the person stated I did not need a receipt they would check the truck in shortly. Well I returned same day Saturday and as of Sunday was not checked in and then I called yesterday Sunday and still was not checked in Had to call UHaul to get the matter straightened out and finally today Monday it showed checked in. This made it for an unpleasant experience