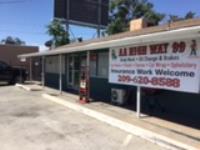 Uhaul over the phone set me up with a discounted price. When I arrived the business had no idea about it and wanted more money . When I was using the truck a d trailer to move out of state the truck was over heating and the trailer chains wouldn't stay in place . After driving it back to the town I lived out of the drop off location charged my card for something I had already paid for days prior. I'm still going through disputes and uhaul is not willing to help with this double charge . There's ZERO communication between the companies who have the trucks and trailers and uhaul themselves . This was a mess of a deal and a bigger headache then it should've been . Moving is already stressful and the last thing anyone needs is more BS added to the struggle . I do not recommend uhaul, not ever again will ever be using this service .

Make sure you serve your customers well.

Very effiecient and fast service! They were very helpful through the whole process.

I was helped by a very knowledgeable and efficient young man. He wore his mask and communicated to me what I needed to know. Would return to this location in the future.

I was notified prior to scheduled pick up that trailer would not be ready which was OK, but when I did call to confirm pickup the trailer reservation had been canceled and trailer was rented to others. Fortunetly the facility had another one available. When I dropped it off at 3pm, 2 hours from the pick up time which was at 1pm I had to pay an additional days rent. Probably will not ever rent another trailer or truck from Uhaul again. Their loss.....

The owner went above and beyond normal service.

The area is in a very poor side of the neighborhood. That should have been my red flag to not rent from this specific location . The truck I rented reeked of marijuana and left my furniture smelling of marijuana as well. I was told I was going to be contacted within 48 hrs and I have yet to receive and contact and I was still charged for the truck rental

Get more trailers. I had to drive 45 minutes to pick it up even though I reserved it in another town and they never notified me that I couldn't pick it up at where I requested.

Everything went great and easy.

I picked up the trailer on Wednesday morning. I was told that we could keep it for 48 hrs with no extra charge because they did not need it back until 5/29. We told them we'd have it back today, we didn't need it that long. She asked what time, I said around 11, she gave us until 11:30 am. We had it back at 10:56. She confirmed the price would not change. At drop off she tried to tell me it would be an additional $154. I said for what? She said we were late. I told her she was the one that told us 11:30. That I was not paying another cent. That she told me the final price was $67 and some change when I rented it. She tried to rip us off. I was very stern with her, she got a slight attitude with me and said she would fix it. I'm not a fool, don't play me for one! I will never deal with this location again.

The couple that helped me were friendly, helpful and understanding.

The customer service was extremely bad. Very unprofessional. They charged me before I left, then tried to charge me a second time when I dropped the truck off. I had to ask why I was being charged again, apparently they didn't need to take my card again, despite them trying. Staff was very unprofessional. Would NOT recommend this location to anyone.

I think the issues started with the scheduling center i called. She assigned the wrong equipment, wrong price and had it set up as a return to same location ( a 5hr round trip with an empty bouncy trailer ), but charged for a one way drop off, and for 2 days when we needed 1 day max. We told her when we would be able to pick up and the workers at the pickup location rudely said we were late, even though it was when i told her we would be picking up. She really wasn't listening to anything i said, just trying to get my cc info. The pick up location wasn't in the best part of town. We weren't able to drop off that night because they had put the wrong drop off location on our order and WE would have had to pay for dropping off where we were supposed to when they messed up and there was noone available to change the order, which made the next day drop off a huge pain.

The young man who helped me was easy to talk to, gave me extra day for free and extra miles. Thank you for your kindness!

They stayed open late so I could pick up and drop off my rental. Very nice family

I would not recommend 7th street Modesto Ca as a place to rent a UHall from. Very bad area and the office reeked of POT. The staff didn't know what they were doing and very unorganized! It took a half hour for them to figure out the computer system, which they never did. They took a picture of my drivers license with an iPhone, I thought that was odd and I felt very uneasy about my license being on their phone! Probably this all contributed to the fact the were stoned! I felt stoned when I left the office! As for the vehicle, it was a box truck, what can I say...it was clean at least and it drove fine.

You all did great, we will definitely be using your services again in the near future

They were knowledgeable and helpful