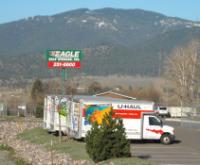 Blankets were not included when they were supposed to be. A refund was issued, but they would have been very helpful.

I accidentally left a hat in the truck and the staff called me to let me know. They were very friendly and I could tell it was a well run business. I would definitely rent from them again.

I had called and asked uhaul to note a concern with my Driver's License, when I arrived this had not been communicated, It took time to "rerent" the truck to someone else's name. The guy working the counter was absolutely straight pissed off about even having to "deal with this." Total Jerk.

Excellent and great thnx so much.

Great and quick customer service upon pick up!

One of the tires blew out within a couple hours and we had to get both replaced because the other tire was the wrong size and was rubbing on the fender. It took three calls to finally get in touch with roadside assistance and then we also had to stop at the next uhaul location to change both tires again. This took up three hours of our time while traveling a very long distance.

One of the worst experiences of our lives! Moving is already stressful and the Eagle manager made it a so much worse with his demeaning comments and dismissive attitude. He condescended with every question we had. We had trouble with the trailer the second day and he refused to help forcing us to drive to strand location where they were so incredibly helpful. You could tell they had to deal with people after Eagle. Strand took care of us extremely well. Eagle however, was so bad I went out of my way to contact everyone I know currently moving in Missoula and tell them to refuse to get their Uhaul there.

This was the best uhaul experience I've ever had. The man who helped me was insanely helpful and made the process of moving much less stressful. I will recommend this location to everyone I know! 6 out of 5 stars!

These guys know their product when talking about U-Haul. They reccommended a size for the amount of things i had to move and it all fit perfectly.

Stephanie and the crew were SO helpful during our move! We had to extend the date multiple times, everyone was so understanding and we appreciated them so much! Thanks guys!!! ðŸ‘ðŸ½

Two of the staff were very friendly but seemed newer. The third guy seemed annoyed we were there to begin with but he also seemed like he was the one that knew how to do everything. He was much more helpful the second time I was in.

Local people are great. Uhaul website is clunky and inefficient

I picked up this van in Missoula, I open the cargo area to discover brush and yard debris covering the floor. I asked the guy at the counter to take a look, because of Covid he refused. He said I would receive a link for a self check out of Van. I did not receive the link. I was in a hurry to get to Lewiston to watch my son play baseball. I only rented this van, because there were no rental cars available in the Missoula/Hamilton area and I was in a car accident on Friday night. I never even used the cargo area, I put my bags in the passenger seat. I forgot to take a picture of the cargo area, but as far as I am concerned that is Uhaul's responsibility to evaluate their equipment with the customer so that both are aware of issues related to rental equipment. Hypothetically I could have made the mess in the van and taken a picture and said it was the status at pickup. Without a Uhaul representative walking the equipment together with customer at time of pickup its not possible to determine the true status of the rental equipment at time of pickup. Every Uhaul I have ever rented a representative has walked around the the equipment with me at the time of pickup and we have been in agreement at time of pickup. This is a ridiculous charge and I intended to fight it all the way!!!

The UHaul trailer was difficult to return online We called the number and were on hold for over 1/2 hour. Unacceptable! Will try Ryder rentals if we need again.

This location is easily accessible and very accommodating. I definitely will use them again.

Conflicting pricing. Rented a appliance dolly and paid ten dollars. Sticker price on dolly was seven dollars. I pointed this out to my cashier and he was less than apologetic. Everything else was fine and overall a decent experience.

Employees not friendly; both picking truck up and dropping off. Limited eye contact; more interested in computer. didn't appear that my business was desired or appreciated whatsoever.

the manager at this location called me 2 minutes prior to my pickup to tell me that he did not have the trailer requested. I turned around called the national Uhaul reservation center who worked with me. We found out that the manager at Eagle LIED and did have the trailer. This manager made it as difficult as possible to rent the equipment. He should not have a Uhaul franchise. I rent Uhaul on a regular basis and have never been treated this poorly before. On return he was as snotty and miserable as yesterday. I will speak of this experience to all of my family and friends.

First I have to drive 30 miles to get this tow Dolly, Even though there is a rental place 1/2 mile out of my town in Arlee it wont list! And 5 other places in the same town way closer to me. Then I have to bring it back to Missoula same place I Picked it (site wouldn't let me have or keep closer drop off site) up 30 miles away. Then on top of that The people at the Rental place are rude, Then on top of that I planned to drop if off when I wanted before they opened as I often do. BUT NO after I get it they tell me there is a $20 charge for dropping it off after hours! WTF!!!!!!!!!!!!!!!!!

My mobile reservation timed out due to airline flight delays leaving us stranded at the U-Haul office. Tried calling U-Haul but no response which was common . When you did get through you were put on hold and switch to another number. Very frustrating. Finally got in touch with the local U-Haul office through an emergency number at which time we finally picked up the truck.