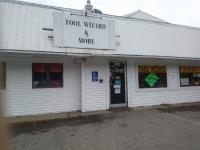 There was an advertising sign still in the truck when I went to pick it up, and the furniture pads I had paid for were not provided.

I have rented from this location multiple times. The guys that run it are AWESOME! They are so warm and friendly and make the rental stress free. I have told everyone I know to use this location.

Customer service dropped the ball and charged me $800 after I got diagnosed with Covid 19 . They told me to keep the truck until I was done with quarantine and when I dropped it back off to the same location )after having someone fly out here and drive it back) they told me the truck was no longer in the system. Next day they charged me $800. I was very responsible about keeping them up to date and they still messed up. I am livid and will be calling the BBB.

Hello, The information offered was adequate. The entryway to the building is inadequate, and unkempt. "Kevin" did a fine job with the details provided. Thank you. Ned

I was told I would only be charged for the time I used the truck and dolly and I was charged an extra day. They don't seem like morning people at all. Customer service is lacking.

They were very friendly and helpful. Thanks

Wasn't aware there is an after-hours charge for the equipment (but not the truck) if you drop off your uhaul when they aren't open. Finding a location was difficult (uhaul's fault) there are only two locations in that area for drop-offs (even though the website has more options)

I dropped the trailer off at this location, did the online stuff, which was not very clear nor did it have a good direction on what I was supposed to actually do, and I got a final bill with the service fee! I called this location during business hours and no one called me back or nothing to confirm they were all set or didn't call to make sure I didn't need to finish the process or nothing. The guy was very rude and made me feel like a very unwanted customer. A call after getting my voicemail would have been nice. The website was not very helpful when doing the return so messages apparently were not very clear. I followed the 3 steps I was given and nothing else was provided to me. I asked the guy at the drop off location what he did to complete my check in and he said "you had to use your phone." Made me feel like I was an idiot because I followed the steps given. Terrible service during the whole process and I don't think I will ever do business with uhaul again. I would buy a trailer of my own instead of waste time and money.

No complaints here. Fantastic service. Will definitely use them again

Need more available parking for the trucks and a clearer drop off spot, but otherwise they were extremely helpful

Liked the convenience of digital checkout/in...

I registered my truck and received a confirmation notice...however I didnot know that I had to do Tool Wizzard so my entire day was messed up. My pick up time was 9am however after several calls a man showed up and I got the truck around 10am Not happy at all.

Helper was amazing and nice, best customer service ever, give him a raise!

I was supposed to pick up in Shelburne, VT, no trailer & was directed 30 minutes away & website said closed on a Friday. I arrived & door was locked. I went around back & found 2 gents who set me up for success

I've used the Tool Wizard before for Uhauls and never had a problem. But this last time was different. There's a stay home stay safe order so all pickups and drop offs have to be done through the app. No problem. Except when I returned the app it failed several times, and it told me to use the "after-hours" drop procedure. It was 1 pm, not after-hours, but there's no employee inside due to the pandemic so i followed those instructions. Then I got charged an extra $20. Tool Wizard has so far refused to refund my money. It's not my fault the app didn't work, and I'm feeling taken advantage of. Not okay.

Not open during scheduled hours, Uhaul online app wasn't working, initially charged me a 'drop off fee' , eventually worked things out but it was an uncomfortable feeling.

Pick up was a NIGHTMARE! Your stupid online app would not work and we could not get a hold of the person that worked there due to COVID. Then after 5 calls to UHAUL the operator just simply said too bad and they did not know what to do to help us out and left us hanging. Luckily the person running the shop saw our issues and tossed us the keys....dont think i will ever rent from uhaul again...HORRIBLE!!!!!!!

Unfortunately the 24/7 app would not work, but U-Haul was great and offered to cover the cost for the inconvenience. The team at Tool Wizards were excellent as well.

I first went to this location to rent a small truck, I was told by who I think to be the owner, that the truck HAD to be returned to that location which would have added another 50 + miles and more in gas. I cancelled the reservation and did it online through U-haul in which I was able to use the same truck for a one way rental. Plus when I picked up the truck I purchased a mattress bag for $4.00, later in the day I looked at my online banking and saw he charged me $40.00. I will be going back today for a refund. I have rented numerous U-hauls in the past and this one by far has been my worst experience.