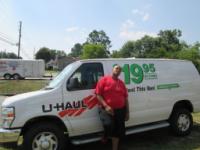 Closed down business with no drop boxes for keys

We didn't deal with a person at drop off. There was nobody in the store so we used a drop box and called to see how to proceed.

The uhaul app gave me a code that was supposed to unlock the top lockbox, but it was actually the code to the bottom lockbox. This caused several issues for me, as I had to call to switch trucks as the key I received from the lock box was different than what I was supposed to receive. The app tried to charge me for both trucks & for the wrong mileage and gas amount due to this switch up, which caused me to have to make several phone calls to fix this. Everyone on the phone was great and helpful, but this switch up caused me a lot of trouble, and the lockboxes at this location need to be addressed to prevent another situation like this.

Find another location. This location is out of business, and so it was unable to provide the additional services (blankets) I reserved with my rental. None of the other locations in Milledgeville I contacted reported having the blankets either. In addition, the U-Haul app did not work as needed. I was unable to upload photos of my license, and so I required technical assistance by telephone to complete this step. I was also unable to upload a photo of the dashboard to show that the fuel level was lower than stated. It's also impossible to compare the condition of the vehicle with the small photos displayed in the app, especially when standing in direct sunlight. As a result of this experience, I was delayed nearly an hour before I could proceed.

Drop-off was terrible. We went to the dropoff location and it was closed. We called uhaul and FINALLY got someone to help us. This was a 2 hour process. Never using uhaul again.

This was the best experience I have ever had with U haul. The guy running the place was great

Not a Uhaul "store", but a rundown clothing store that also sells hot food. Had to drive up a curb and onto a grass lot to hook up the trailer. No assistance offered by the rep at the location. Nice folks though

Everything was Great! Thank you Willie!!!!

The floor of the back of the truck was covered with pieces of broken glass. The owner was rude and discurtious. He did not tell me the truck had to be returned to his location. His entire business is unprofessional.it is a nasty clothing store with a make shift food bar and the owner sat on the floor with an iPad to draw up the contract. U-Haul should never ever let a shoddy business like this represent them. It reflects poorly on U-Hauls reputation. I tried to drop the truck off at a U-Haul vender BEFORE the due back time in Gray GA and when they brought up the screen that is when I found out I had to take it back to Milledgeville GA which caused me to run over on the time thus makeing me inccur additional charges that should not gave been charged since I tried to turn it in on time. When I came into the clothing store/buffet food bar the owner stayed in the back room while I stood out front waiting to check out. Then he refused to go out and do the odometer reading while I was there. He said he was too busy. I feel I should be refunded for the extra days charges.

Rented veh on line got confirmation how to pick up arrived at location started process website inop could not complete sign called 1-800 # no answer. Sent email. Store would not answer door Went to another location after 1 1/2 hours checker cab. Gentlemen very helpful. Was able to get in contact w classica who helped us get the vehicle. Key was not under the seat as we were told. She contacted store and he came out with key Worst experience ever. After 2 hours of trying to pick up vehicle which we had movers waiting and on payroll to load vehicle Went back to return veh and same experience w website. Inop. 8:30 pm

We are being charged for gas and emailed uhaul several times and have not heard back from anyone. This is crazy bc they are quick to rent but when a customer has a question you don't hear anything from them...

This is the second time I have used this drop off location, they are always courteous and helpful.

This was not my original pickup location. They did not have the truck I reserved (not their fault). The truck was very wet inside from rain the night before. Bad leak in roof. The rental location was not very clean. Combination clothes store, buffet line (food) and U-Haul rental... very odd.

Could use more explanation/tips on vehicle operations. I am pretty competent with vehicles of this size, but for someone that isn't, more instruction would be needed. Literally signed the receipt and was given the keys to the truck, no other explanation. Staff was friendly and efficient though.

Willie was very helpful and accommodating.

Willie was very helpful and courteous. He gave us excellent advice. We will definitely use his business again.

If you have a trailer, I recommend pulling it into the shopping center next to the UHaul dealer for them to unhook and disengage trailer into their lot.

This guy was very friendly and eager to help. Very pleasant experience.

I think this is a corporate issue, but we reserved for noon at another facility and received an e-mail stating we could only get the truck at this location at 2pm. When we arrived, the folks said we were booked for noon. We not only lost 2 hours, but were forced to load in the rain.

Let me first stress that the owner/operator was very friendly and helpful. However, the location did not present a "U haul image". In other words, it was not directly identified as a U haul dealer, due to the other businesses operated at this same location. Some of the equipment that I ordered (furniture dollies) were unavailable (however was afforded bread carts to use); the blankets were in a disarray; the truck was filthy upon receiving; and the parking location of the equipment requires you to drive off a curb and into heavy traffic. If not for the "need !" of the rental truck, I would have never selected this location as a go to for U haul needs and expectations.