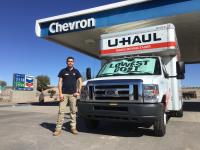 waited 2 hrs for truck..computer was down at CHEVRON in MARANA AZ. It was more like --to bad, I can't help you and we don't use uhaul regional at this location. I called TUCSON UHAUL REGIONAL and was told we could get the truck for $100 instead of $139...DID NOT HAPPEN. Be careful with UHAUL and this location, as they just don't care.

Truck dirty on outside. But location was very convenient and the people were nice.

truck was clean and ready to go...staff was awesome and super friendly..

I didn't pick this location- I chose a pickup location 1 mile from my house- but was re-routed to one 30 minutes away. This is a waste of my tome and gAs. Why are you even giving me the option of where to pickup if it's not honored? The location you directed me to was non-responsive to phone calls- I was even told (By a chevron employee they weren't even there. I had spend an additional half hour trying to locate the chevron employee in charge of uhaul. Then it took him an hour to get me set up. It's ridiculous.

Chevron employees has no clue how to check in guests. They could not give me my keys to the truck and it took over two hours to get my rental which completely altered my moving process that day and the next. Will never rent from this location again and will never recommend.

The Uhaul rental portion of Chevron has very limited hours and only certain people that can check it out. If you wanted a late pickup you could not do it from here.

The Trucks steering wheel is facing to the left while the car drives straight.

I picked the uhaul up at 10:00 am dropped it off at 9:57 And got charged $74.54. I think that's way over priced and I will do business with another company next time. What happened to the 24 hour rental like I was told. Bad business!

Staff didn't seem like they knew what was going on. Received conflicting information on whether or not they were able to receive trucks that were picked up at other locations. 24hr drop off was not available as listed on website. Also when I picked up uhaul, cashier misread fuel gauge and charged me over $70 for a quarter of a tank of gas without telling me and also not proving receipt as "printer was broken". In fact she told me the approx $70 charge was actually my rental fee that had been reduced by about $20 due to using fewer miles. It wasn't until I got home and saw email receipt that I noticed what happened. Called the folks at Chevron and they couldn't fix it, even after confirming they misread the fuel gauge and truck was indeed filled back up. Ended up having to call main U-Haul customer service # to get charge reversed and new receipt sent. Not sure if these guys are trying to scam customers, or just wholely incompetent...

Initial customer service representative assisted well however, once the vehicle was turned in, information initially provided to us was inaccurate and is costing at a higher rate than quoted. When attempting to resolve the issue, individuals at this location do not answer the phone and/or leave you on hold for an extensive period of time and still did not provide any customer service at all.

He made us wait 1 hour due to uhaul system problem, so we were late to our job site as he told my staff that he was going to give us discount but he failed to do it

My only issue is that on line it allowed me to pick one size & type of unit but once at the dealer that particular unit was not available so I had to spend almost 2X the daily rate!??. That did not sit well with me. Other then that my experience was very good and I will always use U-Haul.

This location was clean & the guys were helpful and professional. It was a little unclear with the after hours drop off instructions. The young man in the station gave me confidence that he would handle the drop off and would park the truck. He was very professional and knew his job well. Thank you - Yes, I will use them again and tell others.

The clerk at the site tried to accept my turnin on their application and it said that I had to use my mobile app to turn in the trailer. What a pain in the ass. Not the site's fault,, the turnin process was tedious and time consuming because UHaul required that I take pictures of the interior and the trailer, after it was detached from my vehicle. Ridiculous waste of my time when the site personnel were willing to do the turn in on their system and I could have been down the road.

They were confused & lazy, wanted us to take to different location.

Exact opposite of what I experienced when I picked up the truck. The employee said it was no problem that I couldn't use my phone. He (Shiv) went out and checked the truck, the mileage and gas level. He did the return on his computer and provided me with a copy of my receipt. I so glad I moved to a community that cares about customer service. This was after the uhaul online system directed me to return the truck at a location that doesn't accept turn ins.

I had to clean the windshield and windows in order to see prior to leaving the location.

Seamless experience. We live in the area so picking up here made it so much easier!

The pick up was fine, they pulled the truck around and we're courteous. One concern I had was the lack of inspection, both at pick up and drop off. My concern was getting blamed for damage that I did not cause. I did a self inspection and took pictures with my phone to cover myself. At drop off I was in for a huge surprise. The employee asked me what the mileage and fuel level was. I did not look when I got out of the truck as I expected them to inspect the truck upon return. To my surprise the employee asked ME to go back out to the truck and get the mileage. He never even checked it!! Not only that, he never left the building to look the truck over. When he asked if I wanted to a receipt I replied â€œsureâ€. Before giving me my receipt he told ME to take the truck and and park it back in the area that they store them. I could not, and still cannot believe how lazy this guy was. I made sure to park the Uhaul right in front of the dumpster so when the garbage truck comes, he will have to walk his lazy ass out there and move it. I will say, the truck was clean, nice, and worked great. I don't hold any of this against Uhaul, I guess it is to be expected when renting at a Po Dunk gas station.

All the workers here were great. Made the whole process very good even though it started out terrible.

Nothing. Agent was terrific and so friendly.

Charged me 9.14 for something the could not explain. I certainly didn't go over the miles allowed - I've driven the route many times. Also, I brought it back at the same level of fuel I took it out with. Seems like a scam.

Never received the moving blankets I ordered. However, I'm not holding it upon the locations spot. Because uhaul first sent me to an abandoned scrap yard to pick up my truck and after calling they had a truck available for me immediately.