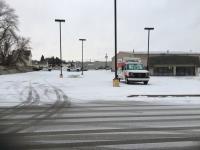 The staff and process at this location was outstanding. The only problem we had here was that the inside of the windshield was very dirty. The biggest issues we had with our rental experience had nothing to do with this location. It was the process of reserving the vehicle we wanted at the location we wanted and the unwillingness to negotiate pricing based on uhaul's inability to meet our online rental request.

Include notes on where the store is located. My GPS took me to corner cell phone store.

Attendant came out of the building and met me; did not identify himself as U-Haul rep (I asked). Told me my fuel was low. I showed him the form I was given at quality showing tank needed to be returned at 5/8th. The tank was at 3/4 (6/8ths). He told me the "system" said I was supposed to have 7/8ths and wouldn't even look at my paper. Didn't offer to check with U-Haul; just asked if I wanted to go add more gas. I said no. I called U-Haul; the rep on the phone looked up and said the system was reporting that I returned the car with more than enough gas. Overall the attendant wasn't friendly or helpful. I wouldn't go back to that location.

Rented a truck on Saturday and to return it on Sunday but they were closed on Sunday, so what am I suppose to do? I left the car and took picture with fuel and mileage and dropped the key and truck at U-Haul Neighborhood Dealer in Manitowoc. Well, guess what happened? I got charged an extra day and charged for fuel even though I refuel it. I called the guy at U-Haul Neighborhood Dealer and the guy literally speaks like he doesn't even want to talk. He keeps telling me to call corporate and THEN gave me a phone number that doesn't even work. Poor customer service and charged me for extra fuel when I did AND for dropping it off one day after. EVEN though I dropped off yesterday when THEY were closed.

They charged me $175 when I was originally told it would be about $130, never got my deposit back, and the ramp as well as the lock on the door were so hard to use because of rust and from not being taken care of. I will never be renting from this place again.

better customer service guy behind counter was an asshole

everything was so smooth.

Well the store owner came walk out to meet me when I dropped the truck off just before 2100. He told me uhaul was closed and he wasn't going to check the truck in. He then said â€œ what the fuck is woth you parking job. I swept the uhaul out before returning it and was still charged a $25 cleaning fee. Overall experience was less than zero stars, it was negative.

Charged cleaning for a clean vehicle, charged missing blankets while none were missing. Nasty people

We had to call because the return address listed on the contract is not the actual drop-off location. This really was not a problem. We called 45 minutes before we were to arrive. Keep in mind the owner called me earlier in the day asking if I might bring the equipment in sooner than my agreed rental time, because he had a customer that wanted to rent it. He was very happy when he found out I would drop it off days sooner. When we called to get directions to the actual drop-off address, we were told he would text the address in five minutes, rather than just telling us on the phone. He never sent the text. We tried texting him. Nothing. We called him back after arriving in the city of return, driving around with no idea where to actually go. He said he would text it. He finally did. Upon arrival to an otherwise abandoned parking lot with a few UHaul trucks and trailers, a man claps at us and directs us to back our RV and the tow dolly into a tight spot around vehicles and a light pole. We get out and explain we will unload the car and the tow dolly can be rolled to that spot. The man did NOTHING to assist with unhooking or unloading the trailer. He stood and watched us do everything. He even watched us pull it to the location he wanted it, helping only the last few seconds to insure it was exactly straight. Otherwise he stood and watched my husband and myself. We have rented equipment from UHaul before. No other location has ever expected the customer to hook-up or unhook equipment. Aside from this, he was rude and he waisted our time with slow directions and poor customer service. This is by far the worst UHaul facility, if it could even be called that, I have ever encountered.

Check in process was completed online including photos of my i.d., but check in at the pickup location was still a 10 minute process with others waiting in line.

The employee that was supposed to help me get my U haul claimed there was a problem with his computer and he couldn't provide me with the truck or help me. He then just told me to call this random phone number without any explanation of who I was calling or what I was supposed to do. All I wanted to do was pay for the truck; I already reserved it online and even put my debit card on file. There was a huge lack of communication and no help. I was then told that I didn't have the insurance for the damage protection, even though I selected online that I wanted it AND told a U Haul employee online that I wanted it. I had to talk to several U Haul employees before I could even leave with the truck OVER AN HOUR LATER. Would NOT recommend this site for pick up or drop off.

Although I didn't park it where requested due to some confusion on my part I didn't expect to get a text thanking me for parking in the wrong spot.

This is the second time I had to rent a u-haul from this location in about 3 months. This time was faster, than the first. The first check out seemed to take forever and they didn't know what they were doing and had to enter the information twice. The vehicle gas tank was on empty this time.

We were told this was our drop off location. When we arrived, the man working refused to allow us to leave the trailer there! He said we had to drop it off at a different location. Beyond frustrating! The other location was not far but this was a hassle as UHaul told us to drop it off here. Will never drop off equipment here in the future.

The store and trucks were kept separately so it made identification of the location and renting the truck a bit more difficult. We had elected to use our mobile phone to start the dental and were unable to do so because we couldn't find the truck at first. Staff was helpful at the location. The truck was dirty (inside the windshield).

Ridiculous. Original drop off there. Got changed without heads up to me. Over one hour to check out

my original reservation had someone elses information but my phone number. I had to straighten out several times. Then I was told that I would have to go to another city to pick up the truck which was 1/2 hour or 4 min away. I dont have time for that.. It turned out ok.

first, there was something itself wrong with the truck, it sounded like the gears weren't working like they should been, it needs an overhaul, the transmission needs repairing, second. the place were we were to drop off the truck, the non English person there said we can only drop off the key and the truck had to be placed two blocks away yet, there were at least 4-5 other trucks in his lot, not a good experience, thank God it is our last and final move

Uhh had reserved a uhaul 5 days in advance and my truck was rented to someone else.

I had to wait for almost over an hour to pickup my truck due to system issues with U-Haul. I hope I never have to use you again. It was absolutely absurd. I had to upload photos countless times. I reached out to U-Haul reps, they told me they'd send me emails to help, but never did. Worst experience ever. I cannot believe the process was as complicated as it was. Im rent a damn truck, not a Lamborghini. Don't know why you need my driver's license uploaded over 12 times. And no representative ever knew what the hell to do. I feel terrible that the people at Nistha liquor now have to deal with you guys. Hopefully never have to use U-Haul again.