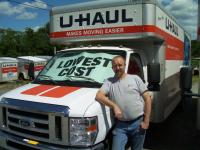 Victor was great to work with! The truck was perfect and we are going to reserve one for our next event. Thank you for being so cooperative and working with us!

Nothing. great people and a good product.

The truck was brought back clean and with a neccessary required amount of gas in the truck at return and was still charged. The $7.00 equipment was not used and still charged. Did not feel that there was good customer support during this transaction. Charges were added on the return which were not true nor necessary. Would not recommend doing business at this location and working with this staff.

Very friendly and helpful. Knows every answer for the questions I asked.

This is not as place to rent from. Victor is not professional nor does he have customer service skills. He is just a rude man. When I called to make the initial one way reservation at JT Signs, Victor was not very professional and seemed condescending with his comments. Reluctantly, I made the reservation. I tried to call back on Friday to make a change to my reservation but could not get through until after 12 or so. After Victor finally answered, I made the change request. There was a brief silence and then the phone went dead. I called back to let Victor know we were disconnected and he answered the phone weird (I can't remember exactly what he said). After saying I wanted to confirm the change he said I got you down. We both verbally agreed on my reservation at 9 a.m. on Saturday, Aug 24. I looked at my reservation Friday night to let my husband know of the time we had to pick up the truck and noticed it was 8 a.m. instead of 9 a.m. The next morning I chatted online with a U-Haul chat member and was given a link to 24/7 pick up information. I went to the businesses website and the opening time was 9. I chatted with someone else and they gave me a number to call to speak to someone that might get me in touch with another rental location. I called the number and spoke to a nice lady about my reservation and was told they do not open until 9 and she did not know why it was showing 8 for my pick up time. She offered me the reservation guarantee payment of $50. I was not expecting this but was very thankful for this. I received a call from Victor at 9 saying he was at the store. I guess uhaul called him to let him know that I was waiting so he called me. I told him I was ther at 8 since that is what my reservation said he said well I don't open until 9. When I got there, he was kicked back in a chair with his feet up on the desk. He did not seem to be in any hurry to help me. We talked about the reservation saying 8 but we verbally agreed on 9. Is not in the mood nor did I want to 'talk'. He tried carrying on a conversation but was very condescending yet again. I told him I already checked in and paid online. He asked how I did that so I explained I used the express online process. He said well I do not know anything about that, they don't tell me anything. They make changes and do not let me know. Then he asked what the $50 was for on my account. He wanted to know why it was charged to him. I told him because I called about my reservation showing 8. He said again that we agreed on 9 and he did not know why it changed to 8. He should not be charged that. He got upset and his whole demeanor changed. Then he said this is why I am going to get rid of them. I only have another month and then I won't deal with them anymore. He did not say much after that. Just pointed to paperwork and said "initial, initial, and sign". Then printed two sheets and said "sign and sign". I was reading the paperwork he was moving

Make sure to take picture of the mileage n gas hand before taking off. Helps remembering for yourself when taking truck back to location. So it won't be no conflict . Beside that great customer service n truck rental

truck had not been returned by previous customer. had to wait over an hours past reservation time. manager of the location was helpful but unable to do anything until truck arrived.

Have the correct truck at the correct location at the correct time. Booked a truck for Columbus, got sent to Woodberry which had no truck then sent to Manchester to get a smaller truck with a trailer. Not real happy with my experience.

They did a great job and promised to take it out of service until the gas leak was fixed.

All went well. No problems whatsoever. Truck ran great. Get a bigger one than you think you need. Glad we went one size up.

Victor T. was great to deal with in Manchester, Ga.

Not only do you get a uhaul you get to look at or even purchase some really cool things he has collected over the years. Nice Guy. Cool place.

Hours posted on line not hours posted on business were correct... had to wait until 2pm before they opened then was told they were doing me a favor by coming in because they were closed! Appeared to have over charged me $125 for 24 hour rental?? I have rented multiple times from uhaul but will not rent from this location ever again nor recommend it to anyone

Would not rent me the trailer unless I bought a uhaul receiver hitch from him. He is a RIP off scam artist. He bragged that he sold 4-5 receivers a week to people just like me. when I questioned him as to why mine was not good enough he said he was liable for an accident if I didn't buy the uhaul reciever from him. I have rented several trailers from U haul and never had a problem with my receiver hitch

The man who rented us the truck was the rudest person I've ever encountered in a customer service position. He was disrespectful from the minute we walked into the business. People like that give U-Haul a bad name unfortunately. If I had other opinions I would have left without renting. Would strongly recommend not allowing this business/person to represent U-Haul. I was insulted and furious when I left with the truck but I didn't tell him because honestly I was afraid to.