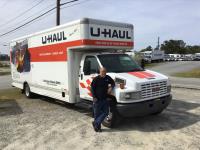 My dolly that I paid for wasn't on the truck I had to go out my way to Gray hwy to pick up a dolly and was told I had to bring the dolly back to the original location. I also was told that I was going to get reimburse for my mileage but I haven't received any email or text about it. I went 6 miles back and forth for a dolly. Need answers

When I arrived to pick up the trailer as scheduled, I was told the uhaul sales person had already left for the day. Then I was asked for some additional contact information that I had never given nor asked before. I was instructed to wait until the trailer was brought around. Then I was told that the attendant could not attach it to my vehicle due to his insurance requirement. I tightened the hitch and connected the lights and the chain to my vehicle. I will make my sooner next time to choose a different location.

Exceptional service. I've rented from U-Haul before but from different locations, this is by far the best experience I've ever had renting a U-Haul truck. Thank for the wonderful experience. I highly recommend Boatworks.

Rented 25 furniture pads but location did not have any pads. It is difficult to move furniture with out pads and I ended up damaging furniture because I could not find enough packing material!

He was great, met me at my car before I was able to get out. Did the return in a quick timely manner and very gracious. He noted that I had extra days if I wasn't aware just in case I needed it longer and provided me information that my receipt would be emailed to me . That email arrived promptly and I was extremely pleased with the whole rental process and the company!

My entire experience with U-Haul was terrible. I will not rent from U-Haul again. I should be getting a refund for everything I had to go through with this rental.

This is the second time I've rented a u haul trailer at Boatworks. The guy there is awesome and I won't go anywhere else.

I had a reservation for a location on Zebulon road for a 15' truck at 8:30 am. Got there at 8:20 and waited for 30 minutes for someone to open. (Sign says they open at 7 am). Call customer service and they tried to send me to a location about 30 minutes away which I declined. Ended up at a closer location and they didn't have my size truck. So I had to take a 26'. Not sure why I bothered making a reservation.

Nothing! Everything could not have been smoother.

Truck rode horrible and we paid for a hand truck that was not in truck . I paid a lot money for a horrible experience

Roger was pretty easy to work with...after renting the car hauler we found our truck that we were going to pull it with was not working the way it should, we had to cancel the rental. I was having a hard time with it all!! Roger came to the rescue and said he would get it all worked out!! He followed thru and the refund came into my account today!! Thank You Roger for going above and beyond!!

When I scheduled the truck I did not know it would be an after hours pickup. I Waited for the store to unlock.. I didn't know I had to use the app. I also had issues with my app and the hold times with customer service to fix the issue. I ended up finding the moving towels later but only used one.. they were disgusting, smelt like mildew . I can't believe I had to pay for that , I ended up using my own towels to move. Also the truck had a lot of scratches without â€œxâ€s on them.

Nothing to change - everything was super easy.

First of all, I was told my preferred pick up location did not have the 10 ft truck I had requested and was informed a second location did. I called the day before to confirm but was told they had NO trucks on the lot. I called the company to find out what was going on, and they found a 15 ft truck I could pick up at a third location. The good news is that I was only charged the price of a 10 ft truck. Had I not called to confirm, I would have shown up and found no reserved truck waiting. In addition, the app was worthless.

I noticed the right tail light on trailer was not working properly but other than that the whole process was smooth and easy. Would definitely use again!

Locations were sketchy at best. App experienced fails and had inaccurate information ledt me with inaccurate charges.

There was no dolly and I was charged more than I was quoted. I sent a request for review and no one has called me. I dont know who to call to amend my billing, and Uhaul does not seem to care.

Try asking if we need furniture pads or a dolly.

Very helpful staff, in and out very quickly.