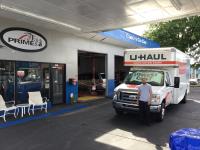 The truck was full of ants. It made the ride unbearable. My truck on the tow dolly wasn't properly aligned and they didn't tell us nor did they tie the steering wheel down & the straps came off.

I was not asked about service protection she just added the cost. When I question the extra fee I was told it was too late to have it remove.

After calling the day prior to ensure we would have our truck, we arrived at Prime Tire the morning of our reservation to discover they had no record of our reservation (which had already been paid for) and insisted we make a new reservation. I don't like to criticize people at work, however this particular instance was unacceptable and the incompetence displayed was frustrating. It turns out our pick-up location had been switched and we had not been notified at all. I blame both U-Haul and Prime Time equally. Might as well get a trash Budget truck next time. U-Haul was able to resolve the issue when we called, and the customer service representative was incredibly kind and helpful.

The man working was kind of rude!

I bring it back the truck same day and they took money off the card charge me for 23to 28 and that's not right.i had it on the 22 if may.It was dirty and I cleaned the truck! And I going to see what I do about it.That was not my card .I drove 15 mile only.

They left us the code to the wrong key box. We had to use a different truck. The truck was larger. I do not plan to be charged for a larger truck. There was no dolly in the vehicle. We need a refund on that. The right blinker bulb was out and the rolling rear closure would not stay open when unloading. When renting remotely there should be someone easily available to assist with problems. Very frustrating.

altogether it took an hour to rent and return the truck. I had two employees with me, paid by the hour. Therefore, I had to pay them for sitting as I waited first to be waited on an then for the clerk to make repeated phone call for instructions on how to fill out and process the for in which she evidently proceed incorrectly so when I returned the truck everything had to be corrected by another endless amount of phone calls. How something so seemingly simple can be so complicated is beyond me, especially when that incompetent s is costing me money.

I will never use this company for my moving needs! I used the self service to rent the truck, once i was finished and completed the online turn in progress. It charged me for an extra day. I called customer service and told them about the double charge, they said they was going to investigate and call me Monday... of course no one called me! I ended up calling them and they still telling me the same thing! Finally they seen i was over charge and was supposed to refund my money, they â€œclaimedâ€ they had to mail the check and it would take 7-10 business days... that was 6/6 and it's 6/28 no check! I called and them and said they â€œJustâ€ mailed the check on 6/18, but they lied and told me they was sending it out on 6/6. I will NEVER rent from them again! It's been a month and nothing has been resolved!

Everything was paerfect thank you. A no stress moving day!

I was charged 100extra miles than used. I do not recommend.

Nothing at all!! Your location was great, staff was so nice and very helpful and accommodating!! The truck was very nice, neat and clean.

When i checked in the woman requested that we park the trailer in a particular location. The only problem is the site is rather small, with cars parked all over the property, making it difficult to manuever.

This facility was closed so I dropped off the vehicle and put key in the drop box.

Had to wait, location did not have the furniture dolly or the hand truck that I had reserved and paid for in advance. The girl at the location told me that I needed to call U-Haul directly which I did . They told me there weren't any available in my area. This all happened on the day of my move. The U-Haul phone representative told me that they don't guarantee equipment - just the truck and that I should just go and buy a dolly. This really screwed up my plans and affected my move. The moving truck was provided .

I rented a truck from uhaul, had this truck for maybe 4 hours. Return truck the exact same day and now I'm being charged $550. For what? I am a very pissed off customer and would not recommend uhaul to anyone, EVER.

Too expensive for few hours of use.