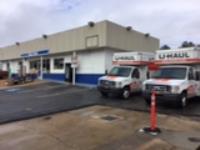 This place is creepy and the owner/manager wouldn't come out from the back and spoke to me through the door. I could barely understand him and finally got that he was telling me that he'll check it in later, that I could leave. I took pictures of the trailer where I parked it and then left.

Terrible customer service. I had a reservation for 11:00 I got to the site and the person left and went to a doctors appointment so I was left to stand around. Thank god a U-Haul worker came on the scene and was able to get me into the U-Haul. DO NOT GO TO THIS LOCATION!!!!

It was a gas station, I had to unload the equipment by myself, he was no help, luckily he was able to log in and do everything properly and it only took 5 min, luckily he spoke decent English as well

The gentleman was very kind and helpful.

The truck rental was done but when we unpacked the truck we had lots of damaged stuff. The movers that we hired through uhaul were almost 2 hours late and I had to get other movers to get started loading the truck because we were on a tight schedule to get out of that home in Georgia. When the movers did arrive they finished quickly and I had thought that was great. They only worked for an hour and a half total but i let them get their full pay and tipped them $20 a piece. So when i unpacked and saw that they never tied anything down and we furnished straps for them to use. A lot of my stuff fell forward and when we opened the back of the truck my stuff came tumbling out. So I don't feel like I got my moneys worth at all with the movers since now I have several things I can no longer use. Would not recommend Ace Family Movers to anyone.

I rented the vehicle on a rainy day and when I brought it back to the location the vehicle had dirty water splashed on it from passing vehicles. The rental location manager said he would charge me $25.00 to hose the vehicle down or I could go to a car wash location and have the vehicle washed. Having paid rental fee and $0.59 per mile I don't agree that I should pay a return fee or hose down the vehicle. This will be the last time I rent from U-Haul, and I will make sure I tell my family and friends about this experience.

Quick and easy drop off. Guy in charge was busy but helpful.

Man tried to make me pay $25 for dirts stains accumulated over years inside of uhaul. Cursed at me stating you can't bring this shit in here like this. A price gouging jerk.

The man at this location is one of the rudest men i have encountered in a long time. First we arrive early to pick up our tow dolly and as my 19yr old son is walking in he tries to lock the door in his face saying that he decided to close early. We told him we had reserved it online already and paid. Then we looked for the correct size tow ball which he did not have so our son took his vehicle up the street to walmart to buy one. He threatened us with overages if we got any dirt or road grime on the dolly. It was pouring rain so things will get dirty. Now a day later he is calling us threatening to call the cops claiming we stole a "tow pin" from him. The only pin he had would not fit our F250 so we purchased the whole set up elsewhere. We will be pressing harassment charges later on today.

I ordered a truck to pull a trailer. The authorized dealer never qualified the UHaul truck to ensure that the truck had the right sized ball for my trailer. My trailer was designed fro a 2.5â€ ball and the dealer gave me a truck that was designed for a 2â€ ball. I drove the truck around to the side of the building before noticing the truck was right for my application. I placed the truck back where it was originally placed and the authorized dealer told me â€œYou left the yard,â€ but I never pulled out of his driveway, because there was a 4,350 lb. car on the trailer that I could not risk that didn't belong to me, but instead belonged to a friend. The UHaul state's that I had drives the truck 0.4 mile when his lot is not large enough to drive 0.4 mile. I requested another truck and UHaul asked why. I explained that I had a removable triple ball that I could remove from my own personal pickup truck and place into a different truck that he had. I had to show where the removable ball placement point was on the second UHaul truck as he informed me that he didn't know about it and he attempted to tell me how it was supposed to be placed. He told me once I was done to return into his store. When I returned to the entrance of his store to reserve the second truck, he and his workers had left his store and placed a sign on the door that said â€œBack In 15 Minutes.â€ He returned 25 minutes later and I returned reserve the replacement truck and he charged me for the first truck as well as scheduling the second truck. After scheduling the secondary UHaul truck, he climbed in to check the mileage and look over the UHaul truck and handed over a key. I attached the secondary UHaul to my trailer, turned on the towing package and turned onto the interstate. Two minutes after getting onto the interstate I observed smoke from my rear trailer axle which has a trailer brake. The passenger side caught on fire. After disconnected and reconnected the trailer a few time, I observed that the truck was causing this brake engagement to occur. I had my passenger to connect the trailer while the truck was in â€œDâ€ with my foot on the brake and the you clearly tell when the connector was connected as you could feel the trailer brake engage each time. To get off of the side of the interstate, I removed the connector which led to me not having trailer lights the entire destination. This had not occurred with the first Ihaul truck nor my personal pickup truck. My personal pickup truck was used to pull the same car again yesterday and I did NOT experience the Trailer brakes locking up again confirming that the replacement UHaul has something engaged that had not been unengaged prior to possession of the truck being transferred to me. The location was in Georgia at the Locust Grove Marathon gas station (Exit 212) just off of I-75. How do you charge people if they never leave your parking lot. I was understanding of charging me for the second UHaul truck, but I didn't quite understand being

I was only 2 hours late to drop off the truck and was charged an extra day.

The owner is rude. He sat in the truck pretending he was watching the gas mileage to tell me to stop pumping to get the gauge at 3/4 of a tank back to where it was at when I rented it.. He allowed me to fill the truck up and when I asked him to give me the difference of my money back he said he couldn't when he owns the gas station. He scammed me out of gas pretending to tell me he would tell me when to stop pumping. I want my extra money back.

The owner was great, I won't rent from anyone else!

Horrible customer service in Locust Grove. I will never do that again. Even lied on the contract saying he provided a full tank and he did not

Uhaul is the absolute worse when it comes to providing the customer with all of the necessary cost involved in long term rentals. I rented a uhaul and kept it for 22 days and there was a â€œcoverage chargeâ€ in the amount of $308 attached to my bill that I knew nothing about until the truck was returned. Needless to say, I was very upset and I will NEVER rent from Uhaul again!

Dropped trailer 11:30 PM on 10th. Went @ 930 AM on the 11th to confirm drop off. Person at station told me I put it in the wrong spot, said he would get to it when he could and went back to his conversation with someone he was talking to. Recv'd email from Uhaul it was not chk'd in on 12 so went to location @ 1230 PM and called Uhaul, they called the facility and person there said owner would be there at 4 or 5 and check it in. Uhaul said it also sent an email marked urgent about it. 13 Feb no call or email so called UHaul and they spoke to Paul, first told the trailer was not on the property, after another hold told it was and would be checked in. Got an email w/in 10 mins it was there, good & checked in. Terrible customer service, made 2 trips and 2 phone calls to Uhaul over 3 days to get a trailer checked in. Would never recommend or use this facility.

This was the second location directed to. First was not so good and would not recommend u-haul based upon first location.

Owner is to busy to see to the true needs of every customer. The wait time is ridiculously long and the owner bounces around from Customer to customer before finishing assisting the first.

Customer oriented business excellant Service, had me in and out quickly and smiling. Business is located at a convenience store with gas and diesel with Competitive prices. Can't do better than this in Locust Grove. Give Paul a call. He will take care of you..

final drop off location was fine

Got charged for some extra equipment I didn't rent, but they took care of it on the website via chat promptly.

Paul was great and friendly. Also Monique what's great about helping us to get a different pick-up location.

We go out of our way to rent here. Very friendly family owned business